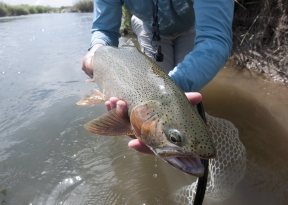 As always this time of year we’ve been watching the bridge abutments, rocks and streamside vegetation. We’re looking for nymph shucks which indicate the salmonflies are coming out. We’ve seen shucks at Stone Bridge below the confluence with Warm River. They are also starting to pop out at the Vernon Bridge below Ashton.

Most knowledgeable anglers know that the salmonfly hatch starts showing up on the lower reaches of a river and moves up the river, sometimes several miles a day. This knowledge doesn’t apply to the Henry’s Fork. The emergence is mostly predicated on water temperature. While not written in stone the optimum water temperature for the emergence is 56F. The main reason our salmonfly hatch doesn’t start low and move steadily up the river is because of significant water temperature differences on various sections of the river. The Henry’s Fork has two dams, abundant springs, and a number of tributary streams.

Spring fed tributaries like the Buffalo and Warm River supply the Henry’s Fork a relatively constant water temperature. The water from these two streams is normally warmer than the main river this time of year but cooler as summer moves along. Fall River is a freestone stream which usually runs higher and cooler than the main river. Sometimes one side of the river is different from the opposite because of the influence of water temperature. Releases from the dams can also have a significant effect on water temperature. Current weather conditions add another variable.

The short term weather forecast is not good. The temperature is expected to be significantly cooler with strong winds for the next two days. This could slow the hatch. After Friday the weather looks more promising. I might get a surprise but I’m estimating the salmonflies won’t show in full force until this weekend. The week ahead should be on the money.

It’s also important to realize that another stonefly, the Golden Stone, usually emerges a day or two later than the salmonflies. The big stoneflies can blow through a section of the Henry’s Fork in just a few days while the Golden Stones can continue to emerge for several weeks

Anglers will be faced with low water which will really make things interesting for floaters. Currently the release from Island Park Dam is only 192 CFS compared to an average of 1000 CFS for this date. Anglers who want to float the Box Canyon better have a drift boat that will fear no rock as there will be plenty to fear.

From Warm River downstream there is enough to easily accommodate drift boats but boating anglers will need to change their game if they want to be successful. Today the flow at Ashton is 1250 CFS compared to an average of more than 2500 CFS. The constant caravan of boats working the banks is not likely to workout. Low water drives fish off the banks. I think this year your best chance of good dry fly fishing will be to park the boat and wade the deeper water. It usually takes a day or so for trout to start looking up in deeper water after the egg-laying flights of the big bugs has begun.

I’m old enough to remember the days when there were few boats floating the river. We had some grand times relaxing, eating, drinking and watching over a good run. When we saw a fish blow up on a big stonefly we would wade out and work the water. Blind fishing can also be very productive even if you don’t see any feeding fish.