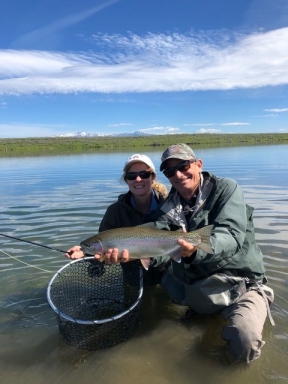 In 1974 I was teaching at the junior high school in St Anthony when Jim Danksin, an outfitter in West Yellowstone, offered me a summer job as a fishing guide. Jim was a licensed outfitter in both Idaho and Montana. He thought most of the trips I’d have would be in Idaho on the Henry’s Fork. I was excited to give this new venture a try.

My first trip was a complete disaster. I floated the Madison River from the West Fork to McAtee Bridge, a distance of about 18 river miles. I’ll save the details for another time. The short version was I didn’t know the river and I didn’t keep track of where I was. I didn’t get to the takeout until after dark. When I got back to West Yellowstone I handed my guide license to Danskin and resigned from the shortest guide career on record. I was staying with the Danskins. In the morning he got me out of bed and told me it was time to get to work. I asked him if he had forgotten our conversation the night before. He told me it wasn’t a conversation. He had clients without anybody to take them. He said I could resign later. The next day went better as did the remainder of the season.

I often think back on that experience. I’m sure if Jim hadn’t put me back in the saddle I wouldn’t have experienced 43 years as an outfitter at Henry’s Fork Anglers. Jim wasn’t as well-known or as famous as West Yellowstone outfitters like Bud Lilly and Pat Barnes but he ran his business at the highest level of integrity and professionalism. Several of our past guides also worked for Danskin including Jim Vermillion, A J Campbell and Bob Kelly. Bob Lamm, our head guide, worked for Jim the year after I left. His mentorship has carried on through all of the years. We were honored that Jim and his wife Lois joined us for our 30th anniversary celebration in 2006.

In 1974 I used a 14 foot jon boat for all of my trips. I think it really helped hone my rowing skills. It was a lot tougher to handle on fast water like the Madison and the Box Canyon. I upgraded to a used wooden McKenzie Drift when we started our business in 1976. Back then we all used wooden drift boats. They were very high maintenance but handled as well as today’s modern drift boats. Back then there weren’t many boats on the water and most of them were fishing guides. That has changed.

Guides have borne the brunt of criticism about too many boats on the rivers but hard data says otherwise. For over 50 years the Idaho Outfitters and Guides Licensing Board rules and regulations have restricted every river in the state to a specific number of outfitters. River sections are also restricted to a specific number of boats at any one time on every stretch for each licensed outfitter. These numbers have not changed in 40 years. Outfitting businesses that have been around for a while almost always max out their allotted slots on the river during the busy times of the season. What this means is that we are not putting any more boats on any given section of the Henry’s Fork today than we did twenty years ago. Even on rivers that are not restricted to a specific number of guides, like the Madison River in Montana, the total number of guides have made up less than 20% of the total boats on the river.

Monday evening I drove up to the Chester Dam to meet a couple of friends. We planned to do a short float from the Vernon Bridge down to Chester. There were still so many vehicles with trailers that there wasn’t a place to park. Only one was a working guide. Lynette Baum, owner of Yellow Sally Shuttles reported running 127 shuttles on Tuesday. Only 11 of them were working fishing guides.

Two of the largest drift boat manufacturers are located in Idaho Falls. A couple more are located in Montana. There are also rental companies with lots of drift boats for rent in Ashton and Driggs. There are lots of anglers today who consider a drift boat as essential for fishing as a fly rod. I can understand why people complain about all of the boats on the river because every year there are more and more boats. This year the boat traffic seems greater than I can ever remember. Yet there is a perception, especially from locals, that all of the drift boats are fishing guides. Another requirement by state and federal agencies is that all guide boats must be identified by letters at least 3 inches high. All guides licensed on the Henry’s Fork are easily identified by the logo of the outfitter they work for. If the boat does not have a logo, it is not a licensed guide.

I recently read a post on social media about the Fun Farm access. The individual felt that since Idaho was not issuing nonresident fishing licenses there wouldn’t be as many out of state guides bringing out of state clients so there wouldn’t be many boats taking out at the Fun Farm. There are a number of misconceptions here. First off, most fishing guides are not out of state. Most of them are Idaho residents. Many of them have families they are trying to support. This will be an especially difficult year for them as many people have cancelled their trips due to concerns about the Chinese Virus. It’s true that while many of the clients are nonresidents, there are also lots of resident customers that use the services of fishing guides. A new drift boat with trailer will run $7,500 to $9500. That will buy a lot of guide trips. If you own your own boat, you will be rowing your fishing buddies down the river or teach them to row. You will also need to arrange your shuttle. Lots of anglers would rather not deal with everything that goes with owning their own boats preferring instead to use the services of a fishing guide.

One reason there are more boats on the river than ever before is because most of the river front property is private. Twenty years ago I could park almost anywhere and access the lower river to wade fish without a problem. Not so today. Most of the private property has been developed or posted with no trespassing. The north side of the Fun Farm was open for wading access ever since I was a kid. Now it is posted so the only wading access is near the boat ramp across the river. Other wading accesses further up the river have also been closed putting more boating pressure on the river.

Another thing to consider is that only one or two anglers can fish from a drift boat. Yet when the boat is launched from point A to point B, every person along the route will notice the boat. If the same two anglers were wade fishing, they would only be noticed by those in the vicinity of the wading area. That’s one reason I prefer to wade.

It is not my purpose to complain about boats on the river. On the Madison River in Montana a big fight has brewed up to try to limit or restrict floating. Of course they are going after fishing guides but limiting them won’t solve the problem. On public water I don’t believe anybody should be restricted. I can understand the reasoning why guides are restricted but otherwise there isn’t a fair way to restrict who can float and who can’t. Rather it is more important than ever to focus on boating protocol and angling etiquette. It’s a given that if the fishing is good it will be crowded. Keeping our focus on protecting the fishery is the best option.

It’s natural to get frustrated with all of the boating traffic. Don’t blame it on guides. Not only are the number of guides restricted but they are held to a high standard of professionalism. Bad behavior is often blamed on guides. Not that guides are perfect but they represent the outfitter who employs them whose logo is on the bow of their boat. As outfitters we expect our guides to be courteous and respectful of other anglers. If you witness bad behavior of a guide, we appreciate hearing from you.

I appreciate the fact that the entire Henry’s Fork is a terrific fishery. If you arrive to find the river crowded in one section, you can always go somewhere else. That’s what Todd Lanning did earlier this week. He took his 2 sons to Coffee Pot Rapids where there are no boats. They had to walk a bit but they had the river all to themselves, along with lots of salmonflies and nice trout.