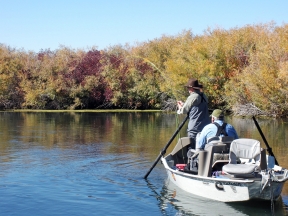 When my book Spring Creeks was published 17 years ago I made the statement that an adult trout has a wider variety of food than any fish in fresh or salt water. So far nobody has every called me out on this. An adult twenty inch trout will eat anything from a midge to a mouse. We tie patterns to match midges, mayflies, caddisflies, stoneflies, hoppers, beetles, ants, and other terrestrial insects, crustaceans, worms, leeches, minnows, mice, and so on.

We also tie flies that don’t look like anything a trout would eat. I’ve seen a trout eat a frog, snake, and a bird. We can look at this as a very complex problem or a simple one. There are anglers who rely on a couple of proven patterns in various sizes while others have boxes and boxes of patterns to represent all of the various food forms trout eat. As for me, I try to simplify things as much as I can but I still have boxes and boxes of flies.

I’d like to believe that trout aren’t dumb but the fact is, they are pretty dumb. A smarter fish like a bass will not ignore a fat frog in order to eat a bunch of midges that would take a week of constant eating to reach the food value from a single frog. Trout do it all the time.

A couple of weeks ago I hit one of the best caddisfly hatches I’ve seen in a long time. The bad news was I left my box with several hundred caddisfly patterns home. It would have been tough if I had had a size 16 Olive EZ Caddis with a Partridge Caddis Emerger as a dropper. Without that combo it was almost impossible. I caught a few fish by wading up close to rising fish and dapping the leader to literally force feed them with a Renegade. Since it was almost hopeless I contented myself wading around in the shallows and taking photographs of thousands of Mother’s Day Caddis.

You’ll likely catch trout if you have a few general patterns that you can present properly but if you want to become proficient on rivers that have good hatches, plenty of fishing pressure, and large wild trout you’ll need to do better. Understanding the most important trout food forms is paramount to success. It all starts with a basic knowledge of the different scientific orders of aquatic insects and other food forms.

It isn’t enough to simply know the difference between a mayfly and a caddisfly. You also need to know a bit about the life cycle. For example midges and caddisflies undergo a complete life-cycle or metamorphosis which consists of an egg, larva, pupa and adult. The life cycle of a mayfly is incomplete consisting of an egg, nymph, subimago (dun) and imago (adult spinner.) Stoneflies also have an incomplete metamorphosis consisting of an egg, nymph, and adult. Understanding this helps not only to know what pattern to use but also when to use it.

Most experienced anglers have a basic knowledge of aquatic insects and other food forms. Yet many of these same anglers have a limited understanding of terrestrial food forms, those same insects we live with as pests throughout our daily lives. A perfect example is the ant.

It is estimated there are about 1 million ants to every human in the world. Ants seem to be a prized food form for trout. One of our earliest fly fishing writers, Edward Ringwood Hewett, took ants home and ate them raw to try to determine if they had a special flavor that trout prefer. I’ve stuck my nose close to an ant pile and the smell was anything but appetizing. Yet when ants get on the water and trout begin to feed on them you’re going to be very happy or frustrated.

It is totally amazing to me how little most anglers understand this most important order of trout food. First off, they have a complete metamorphosis which includes an egg, larva, pupa and adult. The adults have a highly evolved social system which includes three castes: queens, males and workers. Queens start new colonies and lay eggs. Males mate with queens. Workers are usually female but do not reproduce. They tend to the eggs and larvae and defend the nest. Both queens and males leave the nest as winged insects to start new colonies. Like mayflies they mate in the air. After that most of the winged queens and males fall to the ground (or water) and die. Only a very small percentage of queens will actually start a new colony after they lose their wings and the cycle repeats itself.

One of the most important hatches on the Ranch and other local trout streams is a large ant known as the Honey Ant which shows up in August and early September. For many years a number of knowledgeable but misinformed anglers mistakenly identified it as an aquatic wasp, a misunderstanding that persists today. I have had some pretty serious discussions with anglers who insist on the wasp version of this insect. It is important to realize that aquatic insects spend almost their entire lives as an egg, larva and pupa living under the water, only emerging for a short period to mate as a winged insect. Scientists estimate aquatic insect populations by studying the number of larvae or nymphs living in a defined space of river bottom, not the number of adults. So far, no one has ever produced a single larva of an aquatic wasp from the Henry’s Fork. A side note on that is that most adult ants have bent antennae while wasps have curved antennae. The antennae of the Honey Ant are bent. Another important observation is that when the large winged Honey Ant queens are on the water you will also see numbers of much smaller darker colored winged males.

It is not known why these large ants seem to be attracted to water. I remember a day back when I spent a lot more days in the rowing seat guiding a foursome with Bob Lamm. We floated from the Osborne Bridge to Riverside Campground. About midday the trout started rising and it wasn’t long until the rises became violent and explosive. The Honey Ants seemed to appear from nowhere in numbers I had rarely seen. We all had a few welts from ants falling down inside the backs of our shirts. It was a day we still talk about.

Hopefully by the time we see Honey Ants this most bizarre of years will have returned to a sense of normalcy. Now is the time to focus on one of the most epic bug events of the year, the salmonfly hatch on the Henry’s Fork. This will be the only time of the entire year when all of the big trout of the Henry’s Fork will be seeking out giant bugs that will dwarf any other insects they will see the remainder of the year.