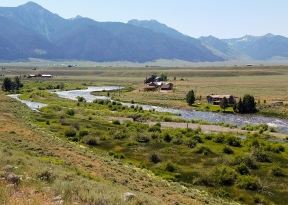 Last fall the Montana Fish, Wildlife and Parks proposed some major management changes on the Madison River. Their proposal is all about managing people, not fish. As far as I know these changes are still in the cooker. We’ll provide updates as they are available. I am also concerned that some of our conservation organizations are starting to focus on fishing pressure rather than the quality of the fishery. Right now these two issues don’t go hand in hand. In fact, they are the complete polar opposite. Anglers flock to rivers where fishing is good. I attended a couple of public meetings regarding management of the Madison River. Fisheries biologists clearly stated that there is no research that indicates fishing pressure is having a negative effect on the fishery. It’s strictly a social issue.

I’ve been a resident here for my entire life and an outfitter for 45 years. I’ve seen the Henry’s Fork at its best and its worst. In the years following the opening of our shop the Harriman State Park, then known as the Railroad Ranch, was as crowded as it is today. I still remember a day during the Green Drake hatch when I walked in from the upper end and walked a mile downstream before I found a place to get in the water without disturbing other anglers. 20 years later there weren’t a dozen cars in the upper parking lot during the Green Drake hatch because fishing had gone to hell and it wasn’t because of fishing pressure.

In 2020 we definitely saw an increase in fishing pressure on our waters. Initially we were very surprised. A year ago we were bracing for a very tough season. Last March and April our phone was ringing with customers cancelling their trips. As the season progressed and we learned more about the virus everything changed. By late June our rivers were mobbed, especially the Henry’s Fork which is always very busy in June. The parking accesses on the lower river were overwhelmed. We also began to hear more complaints about too many boats on the river and too much fishing pressure. Will it change this year? Not likely. We are already almost completely booked up through early July.

I was once part of a panel at a fly fishing event at the University of Wyoming with Jack Dennis and John Gierach. Several of the attendees were very upset about heavy fishing pressure on the North Platte River and they wanted to know our thoughts. One professor was particularly frustrated and stated that he had fished the river for over 20 years and now it was so crowded that he couldn’t enjoy it anymore. John Gierach explained that when he first moved to Boulder his favorite water was the Cheeseman Canyon stretch of the South Platte in Colorado. He caught a lot of fish there over the years using a size 16 Adams. Eventually, as a direct result of fishing pressure, the trout wouldn’t take a size 16 Adams anymore so he quit fishing there. He found other water where he still could catch trout on his Adams. I asked the professor how he would feel if they restricted fishing on the North Platte by offering the first option to anglers who had fished the river less than five years. My point was how can you implement fair restrictions on public water?

Because fishing pressure is a social issue, it is also a political issue. There are those who quickly turn to the government to manage fishing pressure as has happened on the Madison River. In essence they want everyone else managed except themselves. That approach seems to work in Montana. The guided public and nonresidents are already prohibited from fishing the Big Hole and Beaverhead Rivers on the weekends and the same is proposed for the Madison River. I doubt you’ll get the same response from the Idaho Department of Fish and Game. They generally stay out of social issues unless there is scientific evidence that fishing pressure is having a negative impact on the fishery.

We can each take personal responsibility. One reason a particular river is crowded is because you’re on it. If you aren’t there it will be less crowded by a factor of one. It’s human nature to want others to leave so the river will be less crowded for us. About 20 years ago I stopped fishing the Harriman Park from opening day until mid-July. There is no place I’d rather fish but I live here year round. I have fished this water my entire life. I don’t need to fish there during the busiest part of the season. I have plenty of other options. I fish the Ranch as often as I can later in the season when it isn’t as crowded.

If you aren’t comfortable stepping away from a particular place at a particular time, you will need to accept the fact that great fishing water will be crowded. That doesn’t mean we can’t enjoy fishing. If you don’t want to move somewhere else you can modify your timing. Using the Ranch for an example, most anglers try to get where they want to fish by 9 am when the best hatches and spinner falls start to come off. They usually start to thin out by early afternoon. I’ve had some of my best fishing in the afternoon and evening. I’ve quit the Madison entirely since the big controversy began. Prior to that I enjoyed walking the banks in the evening during the salmonfly hatch, after all of the boats and most of the wading anglers packed up. I had great fishing when big trout moved into the shallows.

Boat traffic can give an unrealistic perception of fishing pressure. Three anglers in a drift boat will have a visual impact on every single angler on a given section of water. The same three anglers wading a particular area will only be noticed by a few anglers in the vicinity. When the river is busy it might be a good idea to leave the boat at home.

In Idaho fishing outfitters are restricted to a specific number of boats in a given section of river at any one time. I served on a panel about 40 years ago with Bud Lilly, Pat Barnes, Bob Jacklin and other Montana outfitters to consider restricting the Madison River in a like manner. It didn’t fly. I imagine the issues on the Madison today would be greatly reduced if they had done something way back then. You can download the boat restrictions for guides on the Henry’s Fork and other rivers from the Idaho Outfitters and Guides Licensing Board website.

This season we will do more to encourage our guides to take our clients wade fishing. If they float they should consider other areas that are not as crowded. We’ll also be asking our clients to work with us to fish other areas in an effort to reduce pressure on high traffic areas.

Two phrases I’ve come to despise over the past year are “the new normal” and “we’re all in this together.” I’ll refrain from either of those phrases but it is likely the uptick in fly fishing that we experienced this past season is here to stay. In a future blog I will offer some thoughts on what we can each do to help make our experience on the water as well as that of others more enjoyable.