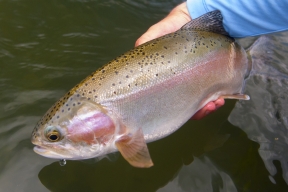 I wrote a blog back in February about what to expect for the 2021 fishing season. Now that we’re basically into the season we can see that things have changed quite a bit since the end of February. Our snowpack didn’t make it much past 80%. We also had a very dry March and April. So far May hasn’t been much better. April was the driest since 1989. The water situation will have a dramatic influence on what to expect from here on out. Of course we can always hope for a good dose of moisture in the weeks ahead but it isn’t likely to happen.

As of this writing the river at my home downstream from St. Anthony is at mid-summer levels. The flow from the Island Park Dam has been cut to 200 cfs. It was only 300 cfs before that. The reason is the reservoir isn’t full. It is usually full by the first of May. This year it might not fill before irrigation demand requires more water to be released than is flowing in. If the reservoir fills it will match inflow for only a short time. Natural inflow is only about 43% of average.

Up until about a week ago this water year was similar to 2016 so we could use that to try to predict what to expect this year. Now the snow water equivalent has dropped to 1 inch below what we had in 2016. These numbers don’t give me a very warm happy feeling.

In 2016 the flow at this date was about 300 cfs. Then it bumped up for a few days until the reservoir was full. Higher releases started to occur about June 12th and continued to ramp up during the next week to a high of over 1600 cfs by the end of June. If my memory serves me right we were very fortunate to have 20,000 acre feet left in the reservoir by the end of the irrigation season. If it gets below 20,000 acre feet it usually starts dumping sediment. We’re actually worse off this year than we were in 2016 so we better hope and pray for some moisture over the course of the summer.

How will this affect fishing this year? It is already having a substantial impact. Our salmonfly hatch is underway. The lower river is flowing well below normal, it is covered up with drift boats, and the fish are not holding on the banks. Wading anglers will likely have better fishing than the boaters but who wades anymore? If you have $9,000 invested in a drift boat you might as well get your money’s worth, right? We’re expected to get a cool down which will slow the hatch a bit. They are even predicting a slim chance of rain on Friday.

After the salmonflies blow through we should get some Golden Stones. After that look for a good hatch of PMDs followed by some green drakes and Flavs and caddisflies. These aquatic insects should produce some great dry fly action. Anglers who travel to hit the Ranch opener on June 15th are not going to be happy. You’ll likely see the flows ramp up to over 1600 cfs.

Later in the season, once the flows get settled the fishing should hold up on the Henry’s Fork. The South Fork could have similar issues. However, this kind of year really benefits the early season fishing on the South Fork. The Teton and the Madison usually don’t start kicking in until late June. This year both of these rivers should produce great fishing in early June.

With things so unsettled there is no point in going out on a limb to forecast what might happen in July or August. We’ll just have to take a wait and see approach. You can keep an eye on water conditions by checking our Regional Water Information link on our website.