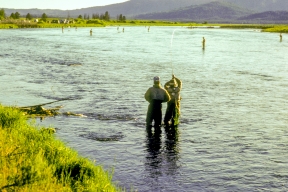 My last blog was about fishing pressure and crowding on our rivers, streams and lakes. Fishing pressure on most of our local waters has continued to increase year after year. There is a direct correlation with quality of fishing and fishing pressure. Anglers flock to rivers that have quality fishing. There are no data, to my knowledge, that correlate a decline in the fishery with fishing pressure. We’ve seen it on the Henry’s Fork. The introductory photo was taken in 1977. The river was as crowded as it is today. 10 years later it was a big empty river. After the Cutthroat fishery fell apart on the Yellowstone River in the park the river was vacant. Now it is back. I went there in late July last summer and could hardly find a place to park. Rivers with poor fisheries don’t usually have a problem with too much fishing pressure.

Last season with the Covid-19 hysteria, our rivers saw a major uptick in pressure. People wanted to get outside and they did so whenever possible. It reminded us a little of how things changed as a result of “the Movie.” Couple that with all of the non-fishing interest in our rivers. It was a very busy season. As we look to the 2021 season we can expect more of the same.

Crowding invites conflict. Today the growth in float boat fishing has outpaced wade fishing. There are more recreational floaters. On some rivers, like the Upper Teton River and the Lower Madison River, there are more recreational floaters than anglers. Anglers must share the water with paddle boards, kayaks, canoes, tubes and other varieties of floating craft. On the Upper Teton I was once run down by two women enjoying themselves on an out-of-control inflatable couch. However everyone has a right to be on public water.

With that in mind I want to share a few thoughts. I may be wrong but I don’t think people are as tolerant of each other as they were a few years ago. As I stated in my last blog I don’t feel the solution is for us to go to government agencies and ask them to limit us. We can’t control the behavior of anybody other than ourselves so that is a good place to start.

We can start by considering expectations. Be realistic. My experience on the Yellowstone River last July is a good example. I knew going in that it was going to be very crowded. I went anyway because it is one of the most beautiful places on earth and the trout that inhabit the river are stunning and big. There aren’t many places on earth where such specimens of wild, native Cutthroat Trout reside. There was an angler fishing where I hoped to fish so I hopped up on the bank out of his sight and waited. Eventually he moved on. There were some big spinners on the water and I saw a few trout rising. I hooked some, landed a couple and prepared myself for the long drive through traffic back to Island Park. I actually enjoyed the time spent waiting and watching other anglers. It was a long day, the river was crowded and the traffic was awful. It wasn’t something I wanted to do again in the near future but it was a very fulfilling day. I waited until late September to go back when the river was not as crowded. Chances are I’ll give it another go this July.

Over the years we’ve been in business we’ve heard about every fishing question. The most common question has been “When is the best time to come?” One that stands out in my mind is “When can I come and catch big trout on dry flies when there aren’t a lot of people around?” The question has 3 parts. Big trout, dry flies, no people. It’s easy to get two out of three. All of our rivers have a sweet spot when you can catch large trout on dry flies but there will be lots of people. All of our rivers have times when you can catch big trout when there aren’t many other anglers around but you probably won’t get them on dry flies. Even the most remote rivers in Alaska can be crowded. In New Zealand things have really changed since I took my first trip in 1980. Today you have to get on the water very early if you don’t want somebody else to beat you to the best water.

There are some very simple rules to consider when the water is busy. It all starts with the Golden Rule. Put yourself in another angler’s place and treat them as you would expect to be treated. I’ve seen some terrible examples of this on my home water. The Harriman Park water often has anglers of all levels of experience. Inexperienced anglers can have difficulty distinguishing the rise form of a big trout. I’ve seen experienced anglers literally cast into the back of another angler’s waders to a rising trout. Not cool! Fortunately most anglers are very considerate of others. If you’re new to a particular stream, and you aren’t sure of the rules of etiquette, you can watch other anglers to see how close you can be, etc. This varies but most anglers cast 40 feet or so. You should never be less than 100 feet from another angler. Walk away from the bank when you’re walking up or down a river, especially if you see another angler fishing towards the bank. Overall be considerate.

Don't Impose Your Will

I’ve written about this before. You may be elated when you hook a big trout and you want the rest of the world to know so you yell and scream. If you miss or lose a fish you can’t help but bellow out a few choice expletives and “F” words. I don’t like loud music. It is getting more common for boaters and sometimes wading anglers to be playing loud music. Be considerate. If music is your thing use head phones. I fish partly because of the peace and serenity I get on the water. It’s important to keep noise down.

Last summer I watched an experienced “Ranch Regular” as they are sometimes referred to, chase a big trout downstream for at least 100 yards, wading through the water that other anglers were trying to fish. It was like he had never caught a large trout before. He spent a good fifteen minutes getting the trout landed. If the river is crowded, you don’t have the right to wade down through other anglers because you are hooked up. It is important to land a trout as expediently as possible. There are times when you might need to use 6X tippet and a very small fly but in most cases 5X will work fine. Most modern 5X tippet has a breaking strength of 6 lbs, enough to put plenty of heat on a big trout. 6X has a breaking strength of at least 4 lbs. When I first started fishing the Ranch 5X had a breaking strength of under 3 lbs. It’s important to play the fish instead of letting the fish play you. If you put heat on a big trout you can keep him disoriented enough so that he will have still have plenty of energy to swim away. Use a net with a fish friendly net bag.

Drive through St Anthony, Idaho Falls, Jackson, Bozeman or any other town in Idaho, Montana and Wyoming and you will see lots of drift boats and rafts parked in driveways. Today boats are a big part of the game. I have a light fly fishing skiff that I use on occasion but I prefer to wade. Rivers like the Henry’s Fork, Madison and Teton have lots of wading access. On big rivers like the South Fork boats are almost essential. As I’ve mentioned in the past boats give an unrealistic impression of fishing pressure because every angler from point A to point B will notice a couple of anglers in a boat. If the same two anglers are wade fishing a couple of spots they won’t be noticed as much. There are a couple of rules to follow for boaters and wading anglers. Don’t cut other boats off. If a boat is drifting slow or pulled in, row out around to give them plenty of water before you start fishing again. . Give wading anglers plenty of space. You should row outside and drift downstream a reasonable distance before you cut back in. When you encounter wading anglers on smaller water like the Teton or Box Canyon, wait before you drift through to make sure you keep from rowing through their water. It might be necessary to stop and ask if it is OK to row through. For wading anglers, make sure to give a boat a lane. One day I was rowing through a smaller side channel on the South Fork. An angler was in the middle of the side channel fishing into the right bank so I lined up on the left bank and started to row through. After I was committed the angler turned around and started fishing the other bank. He was not happy. We could have avoided this confrontation if I would have stopped and asked him if I could row through.

Today social media is loaded with photographs of 20” inch trout that are made to look 25 inches. “Grip and grin” or “hero photos” grace the covers of fly fishing magazines and other publications. All of us have used photos to preserve memories of great fish we’ve caught. However I think the new generation of anglers have taken “grip and grin” photos to a new level. I recently read an article by John Dietsch in Angling Trade News entitled “An Influencer Rows Through It.” He refers to an influencer as an individual who posts dozens of photos on social media in order to get fly fishing companies not only to notice, but also to offer free stuff and in some cases, money. These companies must think that if their product shows up in the photo it will cause people to buy it. Personally I don’t get it. Honestly, do you really care about somebody else’s big fish? I don’t and I expect others feel the same. However, if you must take photos of your trout use a net. Get the camera settings established beforehand. Quickly lift the trout from the water, take the shot, and put the fish back. I’ve witnessed some awful things over the years with people trying to take photos of fish.

I honestly think that fishing in the past few years on all of our rivers is better now than it ever has been. Science backs that up. Great fishing and crowded waters go together. Fortunately there are still a lot of places where you can fish and have the water to yourself. You may not catch a twenty inch trout but it depends on the value you place on solitude.