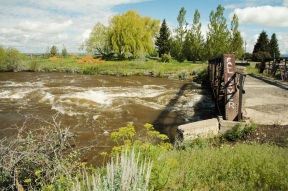 I spent a good part of yesterday working at our shop in Island Park. The phone rang constantly. The word was out about the flood of 2022. Anglers were anxious about what to expect. I have been gathering as much information as I can so I can provide a factual assessment of what happened and what to expect moving forward.

First off, Sheralee and I are not strangers to serious flooding. On June 5, 1976 the dam ruptured on the lower Teton River sending a 14’ wall of water to flood the entire valley including Wilford, Rexburg, and my home town of Sugar City. All of my family members had moved away but many friends and neighbors that we had known for a good part of our lives were left homeless. We spent a good part of the summer helping clean up and lend a hand whenever we could to help people get a new start. My grandfather lived in Roberts, a small town downstream near the main stem of the Snake River. He lost everything. It was then that the impact really hit. His collection of memories in newspapers, journals, letters, photographs and other keepsakes were lost forever. Our hearts and prayers go out to those who were impacted by this terrible flood.

Currently all five entrances to Yellowstone Park are closed. Most of the devastation occurred on the Gardner River, the Lamar River and its tributaries including Slough Creek and Soda Butte Creek. Many of the roads and infrastructure were severely damaged or completely destroyed. Civil engineers and park officials are evaluating the situation in order to formulate a plan to move forward. I doubt that there will be access at north entrance at Gardner or the northeast entrance near Cooke City for the remainder of the season. The other three entrances will likely open again soon but we anticipate access will be controlled or limited. Rivers and streams including the Madison, Gibbon, and Firehole will likely be clear and fishable within a few days. We are hopeful that access to the Upper Yellowstone will be available when the season opens there on July 1st.

Only a week ago the streamflow at the Hebgen Lake dam was just less than 400 cfs. Hebgen Lake was very low by the end of season so water was being stored in order to fill the lake. Then the rains came. The outflow was gradually ramped up to 650 cfs on June 13th. Later that day the outflow was increased to 2000 cfs by the end of the day. The following day it went up to over 3200 cfs. The flow has stabilized at 3220 cfs. The forecast is for dry, hot weather through Saturday that could increase inflow due to melting snow. If we don’t get another blast of rain we anticipate the flow will get back to normal over the course of the next week. If you plan to fish the salmonfly hatch we expect it to start by the end of the month.

The streamflow at the Island Park Dam has climbed from just over 700 cfs to 1250 cfs today. The flow has been stable over the past 24 hours. We are thankful the dramatic increase in flow didn’t occur on the opening of the Harriman State Park. We expect the flow to remain relatively constant over the course of the week ahead. The flow from the Ashton Dam has followed the same level of increase as the Island Park Dam. The above mentioned flows were considerably below average until the rain hit. Even though the streamflows increased dramatically over the past two days, the outflow is only slightly above normal for this date. The greatest impact of the rain occurred below the confluence with Fall River. The flow on this section increased from 2600 cfs two days ago to a peak of 6000 cfs yesterday. Today the flow is dropping very quickly. The average flow for this section is about 2800 cfs. We expect the streamflow to drop down to near average over the next week.

Wet cool weather and erratic streamflows didn’t help our salmonfly hatch on the Henry’s Fork. In fact it was one of the worst salmonfly hatches I can remember. Our PMDs and caddis hatches are occurring on their normal timeframe. We expect the Green Drakes to start showing up by the upcoming weekend.

Like most rivers in our area, the streamflow in the upper Teton River was below average earlier in June. From there it increased to more than 1900 cfs on June 14th. Currently the flow is dropping and will likely get back to normal in a week to 10 days. Personally I like the flow on the Upper Teton to be about 600 cfs. The upper Teton provides a great opportunity to fish the PMDs by the 1st of July. This year it should be right on schedule.

While other rivers in the region have experienced high water, the streamflow on the South Fork has remained well below normal. In fact the flow dropped from 9300 cfs on June 12th to the current flow of 7710 cfs. Normal average flow for this date is about 14,000 cfs. With our snowpack well below normal the outflow was held at a minimum in an effort to fill the reservoir. Our heavy rain during the past week lessened irrigation demand which allowed water managers to cut outflow. By the first of June Palisades Reservoir was 47% of capacity. As of today it has moved to 65% of normal. Right now fishing on the South Fork is better than we have ever seen for this time of year. We expect the flow to remain where it is now, at least, for the next week or so.

I vividly remember another event on the Yellowstone River that occurred a couple of decades ago. The river broke through its berm and flushed into Armstrong and DePuy’s spring creeks. From what we hear, the same thing happened again with this flood. Gloom and doom forecasters on some of the fly fishing forums have stated that these two renowned spring creeks are finished for good. We don’t think so. It was surprising how quickly these creeks came back. It wasn’t without a lot of toil and effort from a lot of dedicated individuals. The break in the river bank had to be repaired which required a permit to alter the stream bed. I don’t see how the same thing can’t be done again. One of the biggest negatives of all spring creeks is sediment. In the long haul the flush could actually help these two great streams.

It is important to realize that the cold, wet weather has actually been a Godsend. A month ago we were anticipating one of the worst water situations we have ever faced. We anticipated our hatches occurring ahead of schedule. We anticipated dire consequences. We expected our reservoirs would be totally drafted increasing sediment in the rivers below the dams. Empty reservoirs result in minimal winter stream flows which significantly decreases survival of juvenile trout. Our heavy rains over the past month have definitely improved our water situation but we’re not out of the woods. We’re still in a drought. We could still use more rain but we need it in smaller doses, not the deluge that occurred over the past few days.