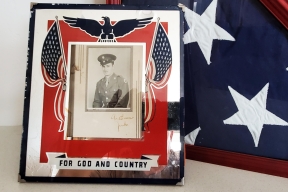 My dad was always my hero. It is because of him that I love the outdoors. We spent many hours together on the water, in the woods and in the fields. He died when I was 21 years old. He was 44. He served in the 3rd Army under General George S. Patton. He never talked about it. We have his letters that he sent to my mother, who was his sweetheart during the war. From the letters I have been able to piece together where he was. He was a combat engineer. While he couldn’t write about where he was and what he was doing, he often described the terrible conditions of the autumn and winter of 1944-45. After giving three and a half years of his life to the service of his country he came home and made a life for himself and our family. He was a hero.

Bill was a member of the Royal Air Force Eagle Squadron 71, one of a group of American pilots that flew for Britain before America entered the war. Bill was shot down Sept 17th,1941 over the English Channel while flying a Spitfire Mk. Vb. After struggling to open his canopy, he was able to parachute out of his plane at 1000 ft. He was afloat in an inflatable dingy for five hours before being pick up by the Germans, and taken to St. Omer, France. He spent the remainder of the war as a POW. Bill Geiger was one of the longest held American POWs of the war against Germany.

While a POW, he was involved with dispersing soil from the tunnels for the Great Escape. Although drawing an early number to go on that escape, Bill was transferred to the all American compound (South Compound) before the March 1944 escape. A book entitled The Few by Alex Kershaw describes the experiences and exploits of the American pilots who risked everything, including their American citizenship, to join the RAF in the Battle of Britain.

Bill and his wife Betsy loved the Henry’s Fork until the effects of age prohibited them from coming to Idaho. He passed away in 2006. Bill refused to fish anything but a dry fly. He often told me that it was never about the fish, it was about the experience. I learned a great deal from him about fishing and why we fish.

Fred was one of the last surviving members of the famous Black Sheep Squadron commanded by Major Pappy Boyington in the Pacific Theater during WW2. He passed away at the age of 88 in 2010. During the last 15 years of his life he and the other members of the marine squadron became concerned that our public schools were not teaching the history of WW2 and other conflicts. They felt a new generation of Americans was growing up with little or no understanding of how Americans sacrificed and fought to keep its citizens free. They were also concerned that a TV show entitled “Baa Baa Black Sheep”, depicted the Marine squadron as a bunch of drunks and misfits. The fact is the members of the group were hand-picked to go on the offensive against skilled Japanese fighter pilots. Their experiences and profiles of the pilots are described in a book entitled Once They Were Eagles by their Executive Officer, Frank Walton.

Fred was co-owner of the Slash E Ranch on Henry’s Lake where he and his wife Jean spent their summers. For years the Black Sheep held reunions with Fred at the ranch. We were privileged to take most them on guided trips fishing the Madison, Henry’s Fork and other waters. They were all heroes. I often joined Fred on his favorite water near the gravel pits below Osborne Bridge. I also joined him on one of his secret spots on Fall River. We also hunted grouse in the mountains above Henry’s Lake.

General Yeager needs no introduction. He is best known for the first man to break the sound barrier in flight. He was also a World War 2 fighter pilot where he had the distinction of becoming an ace (shooting down 5 enemy fighters) in a single day. He was shot down over France where the French Underground helped him escape. The U.S. had a policy to retire pilots from flying if they were shot down and helped to escape. Yeager managed to get a personal audience with General Eisenhower and convinced him to let him fight again. He ended WW2 with 11 kills to his credit. He also flew in Viet Nam.

I first met Yeager in our shop. He frequently joined a good friend at his cabin on Henry’s Lake who had been a test pilot with him. Later I was privileged to guide him in the Jackson Hole One Fly event. Chuck was one of the most likeable people I’ve ever met. He made you feel like he’d known you all of his life. He always made my day when he came into our shop. He passed away last December at the age of 97.

I only met Norman Schwarzkopf once. He hired a guide to take him and his son, Chris fishing. I assigned him to go with Mikey Langford and they floated the Box Canyon. I had ample time to visit with him during his stay. I asked him a lot of questions about the Gulf War, what led up to it, the objectives, and the success of the operation. He really enlightened me about a country that, at the time, I knew very little about..

Nicknamed “Stormin Norman”, he led the American led coalition that defeated Sadam Hussein and his Republican Guard army and kicked them out of Kuwait. He became the most acclaimed military hero since the mid-century exploits of General Dwight Eisenhower and General Douglas MacArthur. General Schwarzkopf died in December 2012 at the age of 78.

I’ve focused on 5 heroes who had great influence on me who have passed on. There are many others who are living who are also heroes. We are privileged to have Todd Lanning, a Marine who served in the Gulf, Somalia and other dangerous places in the world as part of our management team. We have been honored to help veterans that have been disabled mentally and physically to fish our waters.

A few years ago I was waiting in a restaurant for a flight in the Denver airport. There were 6 soldiers sitting across from me. When the waitress brought my check I gave her my credit card and told her to pay for the six soldiers. She said she was sorry but the man in the booth behind me had already covered their meals. Maybe next time.