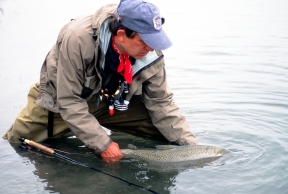 The sport of angling used to be a genteel business, at least in the world of ideals, a world of ladies and gentlemen. These have been replaced by a new set of paradigms: the bum, the addict, and the maniac. I’m afraid that this says much about the times we live in. The fisherman now is one who defies society, who rips lips, who drains the pool, who takes no prisoners, who is not to be confused with the sissy with the creel and the bamboo rod. Granted, he releases that which he catches, but in some cases, he strips the quarry of its perilous soul by tossing it back into the water. What was once a trout—cold, hard, spotted, and beautiful becomes “number seven.”

The Longest Silence was published in 1999, long before Instagram, Facebook and YouTube and before you could take a photograph with the quality of an expensive digital camera with your cellphone. Now everyone is a photographer. Social media platforms are loaded with photos of fish held out at arm’s length from the angler so that a 3 lb. Brown looks like a 6 lb. Brown. I’ll admit, I have plenty of photos of big fish, but I didn’t hold them out to make them bigger than they were. My photos were for me to remember a certain fish exactly the way it looked and the memory of the experience.

For the first 10 years or so after we opened our shop in 1977 we didn’t have Catch and Release regulations on any of our water. It was legal to kill at least one large trout even on hallowed water like the Harriman State Park. As a founding member of the Henry’s Fork Foundation we lobbied and worked hard to bring change but it took time. In the 1970s and 1980s there were lots of anglers who had the “keep fish” mindset. Lee Wulff said “A trout is too valuable to be caught only once.” “Limit your kill, don’t kill your limit” was a slogan on bumper and window stickers, patches and lapel pins.

In spite of our efforts some of our guide clients wanted to keep fish, especially large fish. We have always tried not to impose our own philosophies on our guide clients but it was heart breaking when a customer kept a trophy trout. Such fish were our livelihood. It was definitely killing the goose that laid the golden egg. We also felt a strong responsibility to other anglers. In those days I did more personal guiding. I must admit there were a number of times I “fouled up” a netting job losing a big trout for a client. Our other guides did the same. Unfortunately some of these incidents led to conflicts and very angry customers. Some of our customers undoubtedly realized why our guides didn’t know how to land a big fish.

In an effort to minimize these kinds of negative experiences but still provide something for our clients to remember we instigated our Master Angler program. Initially the rule was to award a nice pin for catching and releasing a trout 18 inches or more on a guided trip. We also provided them with a certificate and a listing in our catalog as well as posting on our shop wall. I have attached photos of the pin and the wall posting with this blog.

It worked better than I could have imagined. It ended conflicts between guides and clients about releasing fish. We continued the program even after the Box Canyon, Harriman Park and the stretch from Pinehaven to Riverside were designated Catch and Release. The updated regulations resulted in more large trout so we increased the minimum length to 20 inches. Later on, after our guides complained about the program, we discontinued it. The guides felt that many of the clients no longer fished to enjoy the experience. Their primary purpose was to catch a “pin fish.”

Today I fear many of us have slipped into the “pin fish” mentality. Most of us wouldn’t consider killing a trout. We proudly take a few photos and pompously slip the fish back into the water to be caught another day. Maybe it’s time to ask ourselves why we fish. As McGuane said, is it to “rip lips, drain the pool, take no prisoners,” or to become part of a seemingly endless array of photos of grinning anglers holding their fish out to look twice their actual size? “Do we strip the fish of its perilous soul?”

Way back when anglers were often asked why they fished. Most of their responses were that it wasn’t only about the fish. I must admit I was surprised when a Trout Unlimited survey listed the Henry’s Fork as the number one trout stream in the nation. Amazing given the fact that most anglers don’t catch a lot of fish on the Henry’s Fork. Today, especially if you scroll through social media sites it looks to be ALL about the fish. Some of these “influencers” rack up as many photos and videos they can for the purpose of drawing more followers or likes so they can become an ambassador of a fly fishing company or a member of their pro staff. They get free stuff.

This isn’t to say that I’m personally opposed to photos of fish. Quite the contrary. I love seeing tasteful photos of beautiful trout. My favorite photos are those where the fish is held in or under the water. There is nothing wrong with holding up the fish of a lifetime or a fish of the trip as long as it is done right. If you get all of the camera settings right you can lift the fish out of the water and for a quick photo. I’ll be honest. I can’t comprehend landing enough Permit without taking at least one photograph of every one I’m lucky enough to catch.

At Henry’s Fork Anglers we have taken this to task. If you scroll through our website you won’t see a lot of “grip-n-grin, hero” photos. We have continued to upgrade our photo gallery. We’ve tried to organize our photos and videos into how and where we fish in addition to tasteful shots of fish in the water. We’ve tried to follow this philosophy on both our Facebook and Instagram pages. I’m especially proud of our guides. They respect trout and hold them in very high level of esteem. The guide staff bios on our website don’t show them each holding a great trout as is common on some of our competitor’s websites. Certainly they’re happy to oblige a client with photo of a special fish. In fact we encourage you to send us your photos by email and we’ll be happy to post them on our Facebook page.

A photo of a fish of a lifetime provides a memory that will last forever. Even though we frequently worked together, Jack Dennis, Gary Lafontaine and I rarely had a chance to fish together. Jack and I arranged to go fishing on one of my favorite “secret” spots. Jack piled his video and photo equipment into the boat. I tried to get him to leave it all in the truck. I thought we could enjoy the day for the simple experience of fishing together without bringing all of that stuff but Jack insisted on it. Towards the end of the day I hooked the biggest trout of my life. I battled it up and down the river.

Even though I hooked it on a streamer with heavy tippet I was lucky to land it. As I held it in the water I couldn’t help but wonder how old it was and what perils it had to face to live so long. Jack got a couple of nice photos as I carefully lifted it out and back into the water. Jack had a weigh net. The fish bottomed the scale so we don’t know what it actually weighed other than it was more than 14lbs. I couldn’t have been more thankful that Jack insisted on bringing his camera gear. I didn’t need to hold the fish stiff armed in front of me to make it appear bigger than it actually was.

Today it’s relatively easy to take a masterful photograph with a cellphone but it’s hard to not get carried away. It has been my privilege to spend time on the water with a number of great professional photographers including Val Atkinson, Andy Anderson, Barry and Cathy Beck, Robert Dotson, David Lambroughton, Jess Lee, Dale Spartas and others. Check out their work on the internet or social media. You won’t see many trout being held out as a hero’s conquest. Their photographs capture the total experience. It’s about respect.

It’s also about respecting the water. If you’re one of the generation X anglers who call the Henry’s Fork the “Hank” please stop.