Our Response to Coronavirus 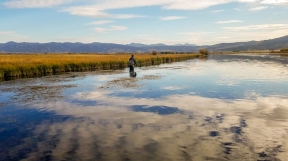 The world has literally turned upside down over the past few weeks. I won’t get into what is going on as there is a constant feed of information through the news media, social media and other sources that talk about nothing else. From our perspective right now coronavirus is a moving target. There are so many unknowns and people don’t really know how to respond. The panic, hysteria and anxiety is almost overwhelming.

Right now here on the Henry’s Fork we have not experienced too many changes in our normal lifestyle. Some things like the toilet paper hysteria have arrived. Our church meetings have been cancelled indefinitely as have our small Rotary Club meetings and so on. Idaho just reported our first case yesterday. Right now it seems the greatest impact on society is disruption and financial turbulence. I don’t want to minimize the seriousness of this terrible pandemic. It is always better to error on the side of caution.

Spring always brings great anticipation. My desire to fish in the cold of winter has dampened with age but once the weather warms I’m ready to get after it. I also enjoy spending time in the woods hunting turkeys. The other thing I look forward to is major league baseball. With the games suspended not being able to watch baseball is of minor consequence especially considering the impact this is having on others. However, if they decide to suspend or cancel fishing and turkey hunting I will be in a world of hurt. Thankfully that is not likely to happen even in a world that has gone insane.

I’m very fortunate to live where I can literally walk out my front door and go fishing. I’m sure that most of our valued friends and customers love the Henry’s Fork and its trout equally as much as me. Many of them don’t start showing up until mid to late May and the majority of those who love the Henry’s Fork don’t arrive until later in June.

Another thing I believe I have in common with most people who fish is that it isn’t always about the fish. My wife and I were stranded on 9/11. We had been in the air from New York about an hour or so when the pilot announced that we were being diverted to Kansas City. We didn’t know what had happened until we got off the plane. We spent the next 5 days away from our family and friends waiting to return to Idaho. When we got back I did two things. The first was to sit in my soft chair in my office, thank God that we were home and read the Testament of a Fisherman, by Robert Traver. It says so much about the state of mind I feel many of us are in right now. After that I went fishing.

I fish because I love to;

Because of all the television commercials, cocktail parties, and assorted social posturing I thus escape;

Because, in a world where most men seem to spend their lives doing things they hate, my fishing is at once an endless source of delight and an act of small rebellion;

Because trout do not lie or cheat and cannot be bought or bribed or impressed by power, but respond only to quietude and humility and endless patience;

Because I suspect that men are going along this way for the last time, and I for one don’t want to waste the trip; because mercifully there are no telephones on trout waters;

Because only in the woods can I find solitude without loneliness;

Because bourbon out of an old tin cup always tastes better out there;

Because maybe one day I will catch a mermaid;

And, finally, not because I regard fishing as being so terribly important but because I suspect that so many of the other concerns of men are equally unimportant – and not nearly so much fun.

Nowhere is immune from coronavirus. As of this date southeastern Idaho, western Montana and western Wyoming have not reported any cases of the disease. Of course this could change but the chance of contracting the virus here is minimal compared to more populated areas of the country. Yet we are taking all of the recommended precautions to safeguard our customers and employees. We believe the greatest effect will be with travel. Air travel is currently seeing the greatest impact. This could continue well into the summer. For that reason we recommend driving if at all possible.

So many of the things people like to do to escape the turmoil and anxiety we are facing today are no longer available. It is our hope that you can still get on the water. What a blessing it can be for those who are endeared to this pastime. Our season is shaping up to be one of the best in the past decades or so. We hope we can share it with you. We know we’ll get through this and be stronger for it. We have great faith in America. We are excited to see you later this season.