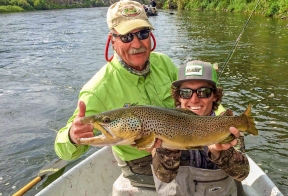 Water conditions like this are a godsend for the Henry’s Fork, especially for our large stoneflies like the Salmonflies and Golden Stones. The trout are more comfortable when the water is off-color. Higher water tends to concentrate trout near the banks. Higher water also keeps the water temperature more constant which helps prolong the hatches. Above all, while heavy runoff from snowpack knocks most rivers out for fishing, the primary water source of the Henry’s Fork comes from subsurface springs so the water stays fishable even though the tributaries contribute a lot of turbid water.

Salmonflies are the largest species of the family of stoneflies. The life cycle of stoneflies is the simplest of all aquatic insects consisting of the egg, nymph, and adult. Salmonfly nymphs live for 3 to 4 years, depending upon water temperature. This means prior to emergence there are at least 3 distinct sizes of nymphs in the river. The female nymphs can reach 5 cm (2 inches) at maturity while the males are slightly smaller.

Mid-level rivers like the Henry’s Fork which flow over cobblestone substrate have the densest populations of Salmonflies. Prior to emergence the nymphs migrate to preferred locations in the shallows. When ready, they crawl out and attach themselves to rocks or riparian plants where they molt into adult winged insects. This usually occurs in the morning or evening hours but can occur at any time in cloudy weather. For reasons not understood, the nymphs prefer certain areas to emerge. This means there might be literally dozens of them in one place while another spot fifty yards downstream might be totally devoid.

The adults emerge sexually mature and start seeking a mate almost immediately after their wings are dry. The males scurry about looking for females to mate. The large females take up locations in the rocks and riparian vegetation where they wait for the males to find them. After mating the females pump a round egg sack out of their abdomens. When the air temperature is right they fly over the water to drop their egg bomb.

This cornucopia of plenty gives trout a nutritional jump start which can last them well into the summer. The nymphs become readily available when they activate prior to their migration. I’ve caught trout that were so full of nymphs that they were regurgitating them and defecating them at the same time. This phenomena is one of the biggest reasons that fishing can be so unreliable. When trout are in the process of gorging themselves fishing can be phenomenal. Yet you can’t buy a fish when they are full of nymphs.

It usually takes a day or two before trout start looking at the surface. There is no reason to feed on the surface when they can gorge themselves with nymphs. Eventually the nymph numbers drop off and they start to get hungry again. The ovipositing females offer the greatest surface feeding action. Most awkwardly fly low over the water where they drop their eggs. While it is uncommon for them to land on the water, they are such poor fliers that many of them crash to the surface. Wind can also be a blessing which can hammer more of them down onto the water. Many of them also fall from streamside vegetation during their mating ritual. Their heavy dense bodies are not designed to float for long periods. They usually flutter for a time before they seem to accept their fate and float quietly to their death.

In order to sustain the species, the emergence must be concentrated to each specific stretch of water. This concentration moves upriver according to water temperature. On years when the water is low and the weather is warm, the Salmonfly hatch can blow out all over the river and be over within a week. The best opportunities occur when the water is relatively high and the air temperature is not too warm. Such conditions allow for the progression of the hatch to move upstream a few miles a day.

The Salmonfly hatch is followed with its smaller cousin, the Golden Stones. I intend to focus on this hatch in another blog but it is important to recognize the fact that these smaller stoneflies are equally if not more important.

One of the drawbacks of the Salmonfly hatch on the Henry’s Fork is heavy fishing pressure. On years like this the Henry’s Fork is the only show in town. In today’s world fly fishers who own a drift boat are the norm rather than the exception. If the floating pressure is heavy you must focus on getting your fly where no fly has gone before. Plan on losing a few flies. As I often tell anglers who are fishing in my boat, “Nice cast but you cast where the ten boats floating ahead of us also cast.” Inches can make the difference.

When the floating pressure is heavy, try starting earlier in the day or wait and float late. Another tip is to stop and focus on specific water. Most floaters stay in their boats and fish to the banks. Try stopping and carefully working all of the water. There are also places where it is impossible to get a drag-free drift casting from the boat. You can beat this if you stop, get out of the boat and wade back upstream. If you’re not getting anything on dries, try fishing a nymph or use a dry with a nymph dropper. Another trick is to use a smaller Golden Stone pattern.

I also usually try to avoid fishing where the peak of the hatch is heaviest. This doesn’t seem to make sense until you realize how fast trout can fill up on these big flies. For the best action I like to stay upstream where there are few if any adult insects. You might need to focus on fishing nymphs but I’ve also seen some pretty good dry fly fishing. Another option is to move down river where there aren’t many adult insects left. Just because you don’t see many flies around doesn’t mean the trout don’t know what they are. In fact, after a trout has had his fill of them for a few days it will be on the hunt for more. You can also switch to a Golden Stone pattern as that hatch spreads out over a longer stretch of the calendar.

I’ve spent about 50 years now trying to create the perfect Salmonfly pattern. While I don’t believe there is a perfect ten (maybe my wife) in anything, I think my latest foam Salmonfly pattern is at least a 9. My Henry’s Fork Foam Stone is an improvement over the older Henry’s Fork Salmonfly. The origination of materials like closed cell fly foam and Enrico Puglisi EP Fibers offer greater floatability, durability and realism. In the old days I felt I needed two dry patterns, one as a low floater and another high floater for fast water. The Henry’s Fork Foam Stone covers it all.

I’ve seen Salmonfly nymphs tied so realistic that I thought they would crawl off the fly tying table. I’m sure they work great but they will bring tears to your eyes when you lose them. In order to fish nymphs correctly they need to be down and dirty. Pat’s Rubberlegs Nymph is everything you need. The color of the natural nymphs range from black, chocolate or chestnut brown. Some have a defined stippled appearance. The focal point of your nymph selection should be a size 4 Black Rubberlegs. From there you should have a few size 6 in the same color scheme as well as a few other colors including some variegated colors. I also like to have some heavily weighted ones as well as some lighter ones to use in shallow areas. If you don’t want to bother with two different styles, simply use a lighter nymph with a split shot. I also like to use a double rig with a smaller nymph up top with a heavier larger nymph tied a foot below.

Weather is the final piece of the puzzle that gives the Salmonfly hatch its fickle reputation. Our Salmonfly hatch on the Henry’s Fork occurs almost a month earlier than our surrounding rivers. Our mountain weather just prior to our summer solstice is usually unpredictable. It can be sunny 70°F to be followed a day later by 35°F and snow. If bad weather is short lived things get back to normal pretty quick but prolonged bad weather can knock out the Salmonfly hatch for good.

This year we are looking for a start up on the lower river below Ashton about May 20th. From there, depending upon weather, it should move upstream to the Cardiac Canyon section below Mesa Falls by the 25th. After that the big flies will start showing up in the Riverside Campground / Hatchery Ford section by the end of the month. Look for them in the Box Canyon about the first of June.

Some sections of the Henry’s Fork actually have a double Salmonfly hatch. In the Box Canyon for example, the East side of the river is highly influenced by warmer water from the Buffalo River where the big flies can start emerging at least a week earlier. The same is true on the Lower Henry’s Fork below Chester. Fall River is considerably cooler this time of year from snow runoff. We often don’t see the Salmonflies in this section until early June.

While it can be unpredictable, fickle and your odds of hitting it right are about the same as hitting a straight flush in poker, the Salmonflies can produce dry fly fishing like you can only dream of. Check out our video entitled “Salmonfly Invasion.” I’m cleaning my line and practicing with my new Sage X 7-weight. Can’t wait!