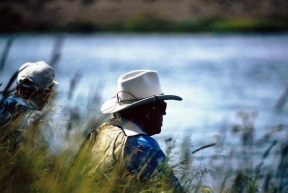 This week we had a major surge in the flow release from the Island Park Dam. The flow last Sunday was 440 cfs. On Monday it shot up to 1450 cfs, more than triple the flow of the previous day. It stayed at 1450 cfs for two days and then dropped back to where it is now at 440 cfs. Needless to say, we didn’t like it. Trout don’t fancy dramatic changes in streamflow.

What happened? It all came down to the recently installed hydroelectric facility at the Chester Dam. I won’t go into details, especially since I don’t know much about this kind of stuff. In a nutshell, the new turbines haven’t been working right. In an effort for engineers to try to figure out why, a huge flush was required last July to test the turbines. Anybody who was fishing the Ranch at the time might have found themselves treading water. We didn’t feel it had any long term effect on the resource but we didn’t like it. At least we had more than a month lead time to prepare.

This time we had almost no lead time. The salmonfly hatch was in full swing on the Lower Henry’s Fork. There was little opportunity to alert the angling public, reschedule guide trips, and adjust plans. Fortunately it didn’t seem to disrupt things as much as we had feared. Our clients still caught fish but had to use nymphs instead of big dries. Wading anglers had some difficulties. It only lasted two days. Not a big deal. However it served as a grim reminder of the meager influence the angling community has with the powers that be who manage our water. In my mind, when a company like Fall River Rural Electric makes a bad business decision, like they did by going with cheap, unsatisfactory turbines, they alone should face the consequences of poor business decisions. If you ask any of our guides or employees what my business slogan is – they will quickly answer, “I don’t want your problem to become my problem!” Fall River Electric’s problem has become everybody’s problem.

I’m not pointing fingers at the Henry’s Fork Foundation, an organization I proudly helped organize and currently serve as a Director. They didn’t have a lot of lead time. Back in April, when this reckless plan was pretty much forced on us, their modeling was based on current snowpack levels and historic runoff data. It indicated that only a slight increase in flow would be required for the test. Normal flow for the middle of May is about 1000 cfs. An increase of 400 cfs wouldn’t have made too much difference.

Another consideration is that our salmonfly hatch on the Lower Henry’s Fork normally doesn’t get underway until about May 20th. If everything would have been normal, the increased flow for the test could have even helped fishing just prior to the salmonfly hatch.

A more serious consideration is, “what is normal?” I have been in this business now for 40 years. I have seen many changes, both good and bad. I remember one year we didn’t see any salmonflies on the Lower River until the first of June. That same year our Green Drake hatch didn’t start until after the first of July. There are always exceptions to normal. However, what was once considered normal now seems to be the exception. I once considered the Grey Drake the most significant of the three large drake mayflies that inhabit the Henry’s Fork. We haven’t seen a decent Grey Drake hatch since 2011. It won’t likely happen again this year.

I don’t want to get into the climate change debate. I don’t know the reason but Grey Drakes only seem to happen in good numbers on high water years. The best hatches have usually occurred when there was minor flooding. We’re a long way from that again this year. We’re lucky to have a decent Grey Drake hatch 1 out of 5 years.

Bobbi Wolverton published the Angler’s Calendar in the late 1970s and early 1980s. Along with beautiful fishing photographs the calendar also had significant dates for the fly fishing community. If I remember correctly, the date for the Green Drake hatch on the Henry’s Fork was June 24th. It’s been a lot of years since this famous hatch didn’t begin until after June 20th. In fact, nowadays the trout and Franklin Gulls often have a week to feed on the drakes before the Ranch opens on June 15th without any interference from anglers.

Don’t get me wrong, I’m not crying wolf. I guess the point I’m trying to make is that if we rely on what was once normal, we might get lost in the fracas as happened with the flush from the Island Park Dam earlier in the week. I think a new normal has moved upon us. In the old days we didn’t miss much without the opportunity to fish the Ranch before the traditional June 15th opener. Most of the bugs really didn’t get going until later in June.

For anglers planning early season trips our own recommendations from our shop have changed. You better show up by the 15th of May if you want to fish the salmonfly hatch on the Lower Henry’s Fork. PMDs are almost always in full swing by the second week of June. An opener in the Ranch on June 15th without some Green Drakes is rare.

When we lose our snowpack early as happened this year anglers are faced with very low water on the Henry’s Fork. This occurs because the Island Park Dam is managed simply to keep the reservoir full until storage water is required for irrigation. This is done by matching outflow with inflow. In recent years inflows have been significantly lower than a decade ago. We heard lots of complaining about the low water conditions when the Ranch opened last year. You can plan on the same this year. The reverse is often true later in July and early August when peak flow releases are required to meet irrigation demand.

What all of this means is that those of you with a lot of old bark like me might need to change your program a bit and catch up with the times. It might also be time to consider lobbying for an earlier opening day for the Ranch.