The Nohackle - A Bit of History 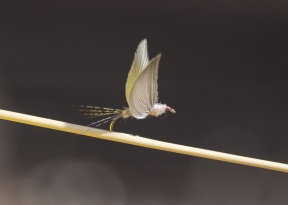 The Nohackle fly tied without hackle and duck quill segment wings has been around for a long time. I once saw an assortment of fly patterns tied by Frederic Halford dating back to the early 1880s. There is strong evidence that this type of fly was used at least a century before.

My personal introduction to the Nohackle came in 1972 from the book Trout Fishing by Joe Brooks. He referenced the effectiveness of the Nohackle on the Railroad Ranch section of the Henry’s Fork. More importantly he introduced Doug Swisher and Carl Richards and their superb book, Selective Trout published in 1971. I wasted no time purchasing the book and began tying the patterns described. Most of the patterns were easy to tie and were extremely effective on the selective trout of the Ranch. The duck quill Nohackle was another story. I gave up after a few feeble attempts at tying it.

About that time one of my closest friends, Rene’ Harrop had moved from a good job at a lumber mill in St Anthony, to tying flies with his wife Bonnie. It was a big step for them to leave the job security to wrapping hackle on a full-time basis. It was a good move in the long run as it wasn’t long afterward that the mill closed down and the Harrops built their reputation for quality and dependability. Eventually they moved from tying for many small vendors to the Orvis Company. The company wanted as many flies as they could tie. Eventually they enlisted me along with some of their other fly tying friends to help them meet demand. Orvis stocked Nohackles and other Swisher / Richards’s patterns tied by the Harrops but the rest of us mostly tied nymphs. I remember spending one entire winter supplementing my school teaching salary tying nothing but size 10 Zug Bugs.

I spent my summer months in Island Park working for the forest service. We lived in a primitive camp not far from Wood Road #16. I rode my dirt bike out to fish this great stretch of water almost every evening after work. At that time there was an old car body in the river just below the bluff at the confluence of Osborne Spring. While I held my own with the big trout in this area, there was one rainbow that consistently fed just out from the old car body. I cast to him on almost a daily basis but couldn’t even get a refusal from this monster.

One Sunday afternoon I stopped in Rexburg to visit with Rene’. Eventually the conversation gravitated to my frustration with the big rainbow. Rene’ just happened to have a mountain of size 16 Gray/Yellow Nohackles sitting on his desk. They were bound for Orvis to match the eastern Pale Evening Dun but they were also a perfect match for our Pale Morning Dun. He handed me a couple of flies and told me to try them on the big trout. I gratefully accepted his generosity and vowed to get even with the big trout.

My first trip back the big boy was back at it just upstream from the old car body. I slipped into casting position eager to do battle but when I picked up Rene’s fly I just couldn’t bring myself to tie it on. The fly was exquisite and the intricacy with which the wings were attached was amazing. I decided the big rainbow could wait.

Back at the camp trailer I spent countless hours wasting time and dozens of duck quills trying to figure out how he could get the wings so perfect. I never began to master the process but at least it was a start. I saddled back up and rode out to meet the colossal trout armed with new ammo that I had tied myself. I looked down from the bluff and he was there, softly rising with a determination. “Bring it on!”

I crouched low and waded into position until I was about 20 feet below the big trout. The cast was slightly off but when he saw the fly he drifted over and inhaled it. Wow! I couldn’t believe it. I almost didn’t even set the hook. When he felt the steel he pushed out toward deeper water. After he gained enough speed he vaulted in a head over tail leap and was gone.

Not to worry. Of course I would have enjoyed cradling him with a brief moment of admiration before slipping him back home but just hooking him was enough. It was a great learning experience. I realized that even though my Nohackle didn’t look like the perfect specimens that Rene’ had given me it worked and it worked well. From then on I didn’t fuss and waste so much time tying them. It only took a few casts for the wing fibers to go from perfect to messed up. The split and separated fibers gave them an even more realistic profile.

Over time I actually became pretty good at tying them. The final exam came when Rene’ called and said he was buried with orders for Nohackles and needed help. He gave me an order for 25 dozen size 14 Hendrickson Nohackles. In my mind they looked awful but Rene’ said they were good to go. A few weeks later Doug Swisher called me up and asked if Sheralee and I would like to tie flies for Cal Gates who owned a shop in Michigan where he conducted fly fishing schools. For the next two years we tied hundreds of dozens of Swisher/Richards patterns. I tied all of the Nohackles while Sheralee tied spinners, emergers, and caddis patterns. We tied these same patterns for our shop after it opened in 1976 for the next several years until Sheralee’s duties as a mother and my business responsibilities ended our fly tying careers.

I spent many years on the road doing programs and conducting fly tying seminars for fly fishing groups, clubs and sports shows. My number one request was to demonstrate tying the Nohackle. The number one question was how to get good at tying them. The answer is simple. Believe in them, fish with them, and tie lots of them. To this day I don’t believe there is a more realistic, life-like, durable representation of a mayfly dun, cripple or emerger than the Nohackle with duck quill wings.

It’s the fly that won’t die. Early on it was blasted by critics as not durable, a fad that wouldn’t last. Nothing could be further from the truth. Duck quill fibers are far more durable than deer or elk hair and they are naturally water resistant. One of the greatest tests for the durability of a fly is the Jackson Hole One Fly Event. For several years I was one of a 4 member team sponsored by Columbia Sportswear. We were fortunate enough to win the event in 2004 and again 2005. We were in the top five out of a total of 40 teams all of the years we fished as a team. One reason for our success was that we used the Nohackle almost exclusively on the South Fork of the Snake. The fly held together and continued to perform after catching 10, 20, 30 or more trout. It continued to work well after the wing fibers separated and fluffed out.

The Nohackle is very economical and easy to tie but it is a real bitch to learn to tie. Over the years I have taught a number of talented individuals to master it. There are some specifics with regard to positioning the wings, thread tension, and other nuances to consider. These considerations are difficult to share because the wings are completely covered by a finger and thumb. Over the years I’ve learned a trick or two with regard to these considerations. Recently we completed a new instructional video on how to tie the Nohackle. If you’ve struggled with this fly I am hopeful that you can pick something up from the video that will resolve the problem. We are pleased to share it on our website. If waters like the Harriman State Park and other spring creeks are your game, you need to master this fly. It can be done. You can do it.