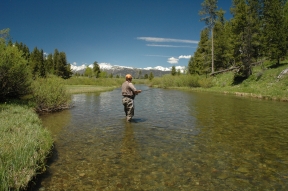 It’s the time of year to circle back to what we expect for the new season. Our estimates and predictions are always based on available data including average snow water equivalent, winter stream flows, and reservoir carry over. Other factors including trout size and numbers from last season are also important considerations. Even though we have all of this data available, weather conditions between now and the first of June will have the greatest impact on our expectations, especially for the early part of the season. I’d like to address each of this important aspects individually to make my prediction.

To get this information I use the Idaho Snotel website You can also stay current on this and other information by frequently checking the Henry’s Fork Foundation website. For the Madison River I use the Montana Snotel report . As of this writing the snow water equivalent in the Henry’s Fork / Teton River drainage is 126% of average. This doesn’t tell us everything we need to know unless we break it down more. This can get a little complex because some reporting stations don’t have a lot of influence on a particular river while other stations have a significant impact. For example we have been closely watching the reporting stations for the Fall River Drainage, particularly Grassy Lake and Lewis Lake Divide. The spring runoff for Fall River has a tremendous influence on our early season fishing on the Henry’s Fork as well as when storage water is released from the Island Park Reservoir. We also keep a very close eye on the Grand Targhee and Pine Creek Pass stations for a better understanding of what the snowpack is like in the Teton River drainage.

The discharge from the dam at Island Park has remained at or above 600 cfs throughout the entire winter. The long term average is about half of that. We haven’t had winter flows like this for a long, long time. Young-of-the-year trout survival, known as recruitment, is highly dependent on winter stream flows in the Box Canyon on down through the Ranch. Higher winter flows translate to more trout per mile. This section of the Henry’s Fork received optimum flows of 500 cfs throughout the prior winter of 2017-2018. To be honest, it just doesn’t get much better than this. By comparison the winter flows of 2016 – 2017 averaged about 150 cfs and the previous winter of 2015 – 2016 averaged a bit lower at 125 cfs. Another benefit of higher winter flows is there is less stress on adult trout. This means that an adult trout 3 years or older has a better chance of survival with higher winter flows.

Currently Henry’s Lake is 96% full, Island Park Reservoir is 86% full and Palisades Reservoir is 85% full. There is a direct correlation with reservoir carryover at the end of the irrigation season and winter stream flows. For example the average carryover in Island Park Reservoir is about 60,000 acre feet or about 45% of capacity. The carryover at the end of the 2015 season was less than 40,000 acre feet. The result was an average winter flow of less than 125 cfs through the Box Canyon. The past two years the carryover has been over 100,000 acre feet resulting in very high stream flows through the Box Canyon. Moreover, good carryover plus higher than normal snow water equivalent usually means later demand for storage water during the irrigation season. Normally the demand for irrigation storage water starts in mid-June resulting in a bump up of stream flows, often right about the time the ranch opens. On years like this one the chances are pretty good that the demand for storage water won’t begin until early July.

The long term average for the Box Canon has been about 3000 trout per mile. If not for a couple of weird years in 2000 and 2013 when the population estimates were above 5000 trout per mile, the average would be considerably lower than 3000 trout per mile. The past two seasons the trout population was almost right on the average. Trout numbers are also very positive on the lower reaches of the Henry’s Fork from Vernon Bridge on down to the Fun Farm. Population estimates in this part of the river have increased substantially since 2015. Rainbow trout numbers have remained relatively constant while brown trout numbers have continued to increase. Trout populations on our surrounding rivers like the Teton, South Fork of the Snake and the Madison River are all on the upswing. Along with data collected by fish managers, angler attitude and perception is also a big part of this issue. Clients who fished with our guides generally had a lot of success on all of the waters we fish. Customers in the shop were happy with the numbers of trout. All in all, our rivers are in very good shape with regard to trout populations.

Reports from anglers fishing the Ranch were mixed. About an equal number felt there weren’t as many large trout (over 20”) and an equal number felt there were as many or more large trout than the previous year. Our guides reported good numbers of larger trout on all of the waters we fish. Trout data collected by our fisheries managers indicated that the average size of trout in the Box Canyon was slightly less than 2017. However it is important to note that the number of age-2 trout was significantly higher than the previous year. Carryover of these trout should realize more trout in the 14’ – 16” range. I love trout in this size range. They fight hard and really give your reel a good crank. Another consideration is that the larger trout most certainly have had a good winter without much stress. All in all there should be plenty of large trout for the upcoming season.

All of these factors indicate that we can look to the 2019 season with great anticipation. We know fishing will be good. We just don’t know when. Weather wise, what happens between now and the Memorial Day weekend will tell the story. Since the first of February the trend has been below average temperatures with above normal precipitation. The 10 day forecast is for more of the same. If spring runoff from our above normal snowpack is delayed as a result of cool, wet weather, we can expect the river to be very high for the Memorial Day weekend. Such conditions would result in an awesome salmonfly hatch. However, other hatches like caddisflies and PMDs might not be relevant until the middle of June. If it gets warm later in March and April, the runoff will come early spoiling our great spring dry fly fishing. The next couple of weeks will tell. One the for certain, other rivers in the region are likely to be a mess early in the season.

We invite you to stay current on our website with stream flows on our regional water information, stay connected with the Henry’s Fork Foundation website and give us a call or drop us an email.