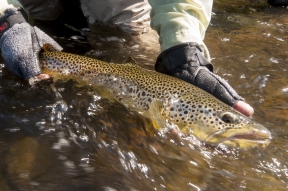 On March 6th I published a blog about what to expect in 2020. It turned out to be pretty long so I decided to do it in two parts. I intended to publish part 2 soon after part one but the world turned upside down. It’s still a pretty big mess. I’ve quit watching the news as things seem to worsen by the day. Instead, I’ve been watching Cheers reruns along with the realization that fishing is more important than it has ever been. It’s time to look forward to the second half of the season.

To catch things up my forecast for the first half of the season was a bit off the mark. I predicted the salmonfly hatch would start at the Vernon Bridge on May 19th. It happened on May 17th so I was pretty close. We’re now getting toward the tail end of it but all in all, It wasn’t all that good to start with. We had some cool weather right when it was getting started but the weather got the hatch back on track. As of this writing we’re still catching some great trout on salmonflies.

We anticipate more of the same for the short term. We expect the flow to remain below normal for the next couple of weeks. Last year the flow was very good for the Ranch opener. Higher releases for irrigation demand didn’t occur until after the 4th of July. That is very unlikely this year. If the weather remains above normal the flow could come up as early as the Ranch opener. Cool weather forecast for next week could forestall the call for storage water. Our early runoff should help rivers like the South Fork, Teton and Madison Rivers.

It’s always a bit of a let down on the Ranch when the PMDs, drakes, caddisflies and other great June hatches start to wane. Yet what is likely my favorite mayfly hatch on the Henry’s Fork will come into its own in July, Drunella flavilinea commonly known as the Flav. This mayfly likes to emerge in the afternoon and the hatches can be inconsistent according to the weather. You’ll find these size 14 mayflies throughout the entire reach of the Henry’s Fork. I’ve also encountered some great Flav hatches on the Madison and Yellowstone Rivers.

You’ll find Pale Morning Duns everywhere throughout the month of July. Important rivers include the Madison, Yellowstone, Teton and South Fork as well as specific sections of the Henry’s Fork. It’s always hard to decide where to fish in July. It’s the most diverse month of the season.

August is the peak terrestrial month on all of our rivers. The quality of fishing depends a lot on weather conditions. In addition to hoppers you can get trout on beetles, ants and crickets. I often drop a nymph when I’m fishing the Madison, Teton or South Fork. Another option is to drop a small terrestrial. This method is especially effective on the Ranch section of the Henry’s Fork. Last season my brother and I fished the Ranch in August. We knew the trout were getting hit hard with hopper patterns. I switched off to a small generic terrestrial pattern that looks like a hybrid between an ant and a beetle. I caught my best fish of the season on that little fly.

Flying ants are also common in August especially on the Henry’s Fork. Honey Ants as large as size 14 concentrate on the water in the Ranch usually accompanied by small black flying ants. Unfortunately concentrations of these ants is very sporadic. It is not uncommon to experience a large concentration one day followed by no ants for several days. When they’re on large trout will be all over them so you need to be prepared. With Honey Ants I always hope for the best while expecting the worst.

PMDs continue to emerge throughout August but not in the densities of June and July. On warm dry days you may not see many flies on the water but if you see rises, a PMD emerger or cripple will be a good choice. This hatch definitely winds down later in the month. Fortunately there are other aquatic insects to fill in the void on the Ranch stretch of the Henry’s Fork and to a lesser degree on the other rivers. Tricos are small dark mayflies with white wings. The emergence of these size 22 mayfly duns starts first thing in the morning. They molt to spinners after the air temperature warms and hit the water in large concentrations. Best areas are the Ranch and slow backwaters of the Henry’s Fork and the upper Teton River. Tricos and Callibaetis provide exceptional dry fly fishing in the morning hours on Hebgen Lake near West Yellowstone.

September has become a very popular month to fish our area but it can be a bit unpredictable. Fishing really slows down when we have above normal, summer-like weather. When it is cool or cloudy it can be fantastic. Tricos and Callibaetis extend deep into the month. One of the best mayfly hatches of September is the Mahogany Dun. These size 16 mayflies show up in the morning hours on the Ranch section of the Henry’s Fork, the upper Teton and the South Fork of the Snake. Hoppers, ants and other terrestrial insects always remain important until the weather gets cold later in the month.

By the end of the month expect to start seeing lots of blue winged olive mayflies, especially if the weather is cool and cloudy. These small mayflies can really get the big fish focused on the surface. This is the most common of all mayflies and emerge on all of the rivers

October is one of our favorite months to fish but last year we had some very weird weather. In fact a couple of the coldest days of the entire winter occurred the second week of the month driving the temperature down to sub-zero levels. A number of our farmers lost their potato crop. It also chased most of the anglers out but those that stayed and braved the cold found some of the best fishing of the year after it warmed up again. The normal high averages in the upper 50s and low 60s with some freezing temperatures at night. This kind of weather is perfect for fishing.

Some folks believe that it’s time to put down the dry fly rod and break out the nymphs and streamers in October. From my perspective, it’s one of my favorite dry fly fishing times. Blue winged olives hatch on a very consistent basis. I also have had great midge fishing throughout the month on most of our local waters.

If you’re really looking for the big tug, October is a great time to rig up your 7 weight rod and throw some streamers. I like to use a 12 foot section of sinking leader with a short tippet to get the fly down fast. That way you don’t have to use a heavily weighted fly which saves some wear and tear on your skull.

It’s always hard to predict what fishing will be like a month from now or even a few days from now. There are several factors to consider including weather, water conditions and most importantly the state of the fishery. I’m excited to say that the fishery is in great shape. We have had three winters in a row of optimum stream flows for wintering trout. The trout we’ve been catching up to now are in incredible condition. With a little help from Mother Nature the 2020 season should be one of the best ever.