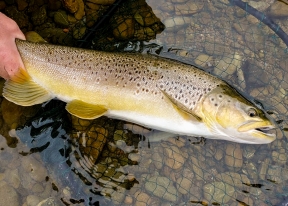 The great journalist Andy Rooney once said, “Life is like a roll of toilet paper. The closer you get to the end the faster it goes.” Boy is that the truth. It’s hard to believe that my previous blog was about 2-1/2 months ago. Not to make excuses but we’ve been in the middle of a building project and we spent most of February in New Zealand. I’ll touch on that in a future blog. It’s good to be back in Idaho.

When there’s still 5 feet of snow on the ground it’s a bit of a challenge to predict the upcoming season. I usually come pretty close by relying on several factors. What was fishing like during the past season? What is the snowpack and year to date precipitation? What is the water storage carryover in the reservoirs? What was the winter stream flow? Daily information from Dr. Rob Van Kirk of the Henry’s Fork Foundation has been very helpful. I utilize his reports throughout the year. If you want to receive a daily email report, please contact Rob at rob@henrysfork.org.

In my mind winter flow is most important. Research has proven that recruitment (survival) of juvenile trout is relative to the amount of winter flow through the Box Canyon. It is also logical that adult trout have a better chance to survive to live another year with better water conditions. The current winter of 2019 – 2020 marks the third straight year with stream flows greater than 500 cfs. The winter of 2016 – 2017 the flows averaged less than 200 cfs. The normal average flow is just under 300 cfs. This data is why I couldn’t be more optimistic for the upcoming season.

Based on these factors here’s where we are. Last season provided some of the best fishing we’ve seen in a number of years on the Henry’s Fork, Teton, South Fork, and Madison Rivers. Currently our snowpack in the Henry’s Fork Basin is 90% of average. Water year precipitation is 86% of average. Storage in all of the reservoirs throughout the system couldn’t be better. In fact with so much water currently in storage prolonged above average temperatures could fill the system to capacity resulting in very high releases. A perfect scenario would be if our temperatures through March and April could stay at or slightly below normal. When we factor in all of these elements: snowpack and snow water equivalent, reservoir carryover, winter stream flow and great fishing last season we should expect our fishing to be as good are better than last season. That’s what we know. What we don’t know is what effect weather could have early this spring and summer.

The data listed above is definite. Weather is indefinite. Even when we have above normal yearly precipitation and above average snowpack, the weather determines when the snow melt occurs. A couple of years ago we had near record snowpack but a very early warm spring resulting in an early spring runoff. Last year the opposite occurred. Our snowpack was again above average. Managers released water from the Island Park Reservoir early on to provide room for the anticipated snow melt. Cool weather in April and May slowed the runoff which resulted in a mediocre salmonfly hatch and a nonexistent gray drake hatch on the lower Henry’s Fork. Prolonged hot dry weather usually has a negative impact on fishing no matter what time of the season it occurs.

February was very cold and dry. March is starting out looking pretty normal for the next 10 days or so. We’ll see. From here on out we can expect some great fishing. We are currently getting some very good midge activity on all of our rivers. We should start to see some good Blue Winged Olive hatches on the Henry’s Fork, Teton and Madison. They usually start up a little later on the South Fork. Our other important spring hatches are the Western March Brown and caddisflies.

I’m not a weather expert. My prediction for the 2020 season is based on more than 50 years of experience. The timing for aquatic insects to hatch does not always match up to the yearly calendar. We don’t know what the weather conditions will be at any given time, what the hatches will be like, and so on. My intent is to provide basic information for anglers planning trips to the Henry’s Fork area. The number one question we get asked is “When is the best time to fish the Henry’s Fork area.” Our answer is always the same, “Whenever you can arrange your time to be here.” There is always good fishing somewhere nearby.

This pre-runoff dry fly fishing may be the most underrated and overlooked fishing of the entire season. From now until the rivers swell with snow runoff the trout will be looking to the surface. When the runoff occurs is anybody’s guess for reasons I’ve previously outlined but we can expect 4 to 6 weeks of beautiful dry fly fishing. Right now we have midges. Look for blue winged olives to start up in late March. Caddisflies and March Browns will begin in April. I dream of calm overcast days in late March and April when the surface is covered with size 18 blue winged olive mayflies.

March Browns are large mayflies best matched in size 12 or 14. They should be named April Browns because I’ve never seen one in March. The duns of these large mayflies usually break free from the nymphal husk at the streambed and make their way to the surface as emergers making a soft hackle a very good choice. The hatches of Grannon, often referred to as the Mother’s Day Caddis, can be epic. Over the years I’ve hooked up with some humungous trout on the Henry’s Fork. My favorite patterns are the Hemingway Caddis, EZ Caddis and Partridge Caddis Emerger in size 14 or 16. It is definitely worth your investment to participate in as much spring fishing as possible. If things aren’t happening on top you can always pick up some nice fish with nymphs. Autumn is often thought of as the best time to catch large trout on streamers. In my own experience I’ve landed more big ones on streamers in the spring than any other period.

Last year we experienced a mixed blessing in late May and early June. Our best fishing with the salmonfly hatch occurs when the water is high and a bit off-color. That didn’t happen last season. We’ve got plenty of carryover in the reservoir and our snowpack is sufficient to provide good conditions for the salmonfly hatch this year. It will all depend on the weather. Look for salmonflies on the lower Henry’s Fork about May 20th, give or take a few days.

Last year we were blessed with good fishing when the Ranch opened on June 15th. We had some decent hatches of PMDs and caddisflies but the best fishing of the period was when our big mayflies showed up, green and brown drakes. I have a self-imposed sanction on myself to not fish the Ranch section until the crowds leave in mid-July so my personal experience was fishing green drakes from Ashton to St Anthony. Based on the great reports from customers in the shop and our guides the hatches of green drakes and brown drakes in the Ranch was better than we’ve seen in the past several years.

The salmonfly hatch arrived on time on the Madison and it was a season to remember. They are making a serious effort in Montana to kick anglers off this river. It was crowded as it always is but it didn’t seem to impact the fishing. My personal experience to deal with this is to go late in the day, after most of the boats have moved on and carefully work the banks and shallow water. It’s amazing how the big trout will move in to these areas. There is no reason not to expect the salmonfly hatch to be equally productive on this great trout stream. The snowpack is above normal as it was at this time last year.

The snowpack on the South Fork drainage is above normal and Palisades Reservoir is almost full. What happens between now and June will tell the story on this great tailwater. Lots of moisture in the next 6 weeks could result in very heavy flows to keep up with the runoff. If things follow suit with last year we’ll have some good pre-runoff fishing and then a period of high water. By the first of July we should see the big bugs start to show up. Last year the salmonfly hatch on the South Fork was epic, one of the best I’ve experienced over the past few seasons. Let’s hope for the best again this summer.

Look for the Teton River to kick in by the third week of June with good hatches of PMDs and Blue Winged Olives. I like the upper river from the top near Victor down to the State Highway 33 Bridge. Even though this section of the river is a large spring creek, there are a number of tributaries that drain the Teton Mountain Range that dump heavy runoff into the river. This normally subsides by mid-June. Keep your eye the river conditions on our website. You can expect great dry fly fishing as soon as the runoff drops off.

Look for Part II of my outlook for the 2020 season later this month.