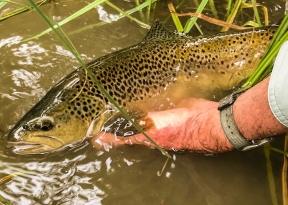 It’s still early to make an accurate forecast as to what to expect for our fishing this upcoming season. What happened last season, snowpack and snow water content, reservoir storage, winter stream flow, spring weather, and trout population are all important factors that I use to make my prediction as to what to expect. With this in mind I will address each of these independently. I reviewed what happened last year in my last blog. If everything goes right we can expect fishing to be at least as good as it was last year and there is a good chance it will be better.

As of this date our water year precipitation and snow water equivalent are both 88% of average according to Dr. Rob Van Kirk’s email water supply report. If you are interested in receiving Rob’s daily email water report you can contact the Henry’s Fork Foundation. Certainly I would like to see this higher. I have been tracking winter snowpack for as long as I can remember and I’ve seen it a lot worse on a number of years so I’m thankful it is as high as it is. Also there are other factors which can mitigate if our snowpack remains below average. We normally get a pretty good dose of moisture in March so we still have a chance to catch up. I’ve been particularly disappointed this winter because we have had a pretty tough winter here in St Anthony and our snow is currently about 2 feet deep. I’d rather see lots of snow in the high country and not as much here. However, wherever the snow is, it can help.

As of this date the Island Park Reservoir is 88% of capacity and it will almost certainly fill by the first of April, the start of our new water year. Thankfully the reservoir wasn’t drafted too low so we started out the winter in good shape. Our 2 largest reservoirs also have a great influence on demand for water on the Henry’s Fork. American Falls Reservoir is currently 83% of capacity and Palisades Reservoir at the top of the South Fork is 75%. The entire system is 79% of capacity. This will leave us in good shape with storage water even if our snowpack doesn’t make it up to 100% of average.

Winter flow is very important below Island Park at the head of Box Canyon. The Teton River doesn’t have a reservoir so winter flow is what it is. Winter stream flow is not as critical on the Madison River below Hebgen Lake or the South Fork below Palisades. Our winter flow through the Box Canyon has remained above 350 cfs for most of the winter. The average flow is about 300 cfs. This will be the fourth consecutive year that the flow has been above average. Back in 2017 the winter flow was more like 175 cfs. We couldn’t be more excited about this. 4 back-to-back years with above average stream flows will result in higher populations and better age class distribution. You can keep track of our snowpack, reservoir storage and stream flows by checking our website for water information.

I touched on this in my last blog. Population surveys by our Idaho Department of Fish and Game indicate that the numbers are above average on the Henry’s Fork, Teton River and South Fork. Our water conditions have been optimum for trout. Angler reports have also concurred with the science. There are a lot of trout in all of our rivers and good numbers of very large trout.

Spring weather can throw a gigantic wrench into our snowpack as well as early season stream flows and overall fishing conditions. I’ve come to realize over the years that this variable usually has a greater effect on our fishing than any other factor. Unusually cool, wet weather in late March, April and early May can quickly turn a below average snow pack into positive territory. On the other hand if our spring weather is warmer and drier than normal we will watch a big snowpack dwindle away. Spring weather can also have a dramatic impact on stream flow. Early runoff usually results low water for early season hatches with higher water in early July with increased irrigation demand. On the other hand, early runoff can result in better early season fishing conditions on the Madison, Teton and the South Fork.

Adding it All Up

We have enough solid data to anticipate a great fishing year. If everything stays on track and things don’t get too out of whack with our weather over the next six weeks, we can expect great pre-runoff fishing with BWOs, Mother’s Day Caddis, and March Browns on all of our rivers. We should start seeing salmonflies on the lower Henry’s Fork later in May. The Firehole River in the Park will also be a good bet. PMDs, Green Drakes, Brown Drakes, Gray Drakes and caddisflies on the Henry’s Fork in June. Later in June the Madison, Teton, and South Fork start coming into their own. I’ll have a much better read on all of this later this spring when I will do another updated forecast.

I’m as tired of winter as I can remember. The night before last it was -25F at the shop in Island Park and -15F here on the lower Henry’s Fork. Our forecast is for more snow and colder temperatures over the next few days but later this week it is predicted to get back to normal. I hope it does. I’m excited to get back on the water. Our fishing can be exceptional in March and April. In a perfect world I’d like to see it warm up but not too much. I’d like to see it stay cool enough to provide rain in the valley and more snow in the mountains. The first day of spring is only about 3 weeks away. Bring it on!