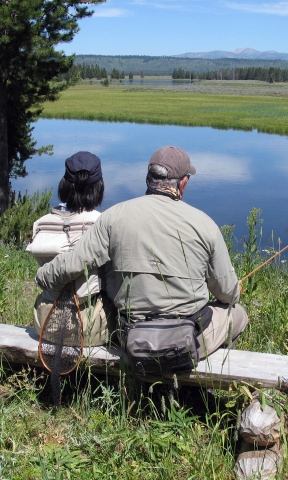 I should be writing about how great the fishing has been on the Henry’s Fork with the blue winged olives or looking forward to the Mother’s Day Caddis that is only a week or so away. The problem is the effect of this virus is continuing to totally dominate our lives.

I’ve read back over my last three or four blogs and nothing much has changed. It’s the same thing every day. I feel like I’m in a movie like Groundhog Day, which stars Bill Murray as Phil Connors, a TV weatherman who, during an assignment covering the annual Groundhog Day event, is caught in a time loop, repeatedly reliving the same day. Every morning he awakes to the music of “I’ve Got You Babe” by Sonny and Cher. One of my favorite parts is he finally smashes his radio to bits, only to have everything start over the following day. Part of his daily routine is to walk out of his hotel and to be approached by an old high school mate named Ned Ryerson. While well-meaning, Ned is pretty obnoxious as Phil wants to go about his business without rehashing the same stuff with old Ned. Finally he punches Ned in the nose.

For me, my Ned Ryerson is the news media. No matter where you get your news, it’s pretty much all the same. They’ve never met a crisis they didn’t love. They thrive on the blame game, pointing fingers, and seem to relish everyone else’s misfortunes. They sometimes make one feel that they don’t ever want to see us get back to our normal lives.

Don’t misunderstand. I realize how important it is to stay current. As I’ve said many times COVID-19 is a moving target and what we are doing and what we can do seems to change on a daily basis. Yet the endless broadcasting can really get to you. We have been limiting ourselves to only an hour or two of TV news and we’ve tried to cut down on our internet and social media time. We are very fortunate where we live because we have lots of space to go outside while keeping distant from other people. But we don’t like it. More than ever we realize we are social folks and we sincerely miss the company of others. We especially miss our grandkids.

I’ve heard it said that if a couple can survive a home building event, they can survive anything. We’re currently building a new home that likely won’t be finished until the end of July or the middle of August. Couple that with being cooped up in a 2 bedroom apartment with one TV and one bathroom. My wife loves to fish and she’s good at it but she can only take about 30 minutes of fly fishing or bow hunting videos. I’m the same with Hallmark movies but they normally last about 2 hours. So far we’ve done pretty well and it gives us an idea of what it’s like for lots of people in this country.

There have been several developments since I wrote my last blog. First off, the models that showed up to several hundred thousand people would die even with social distancing have been very wrong. I’m very encouraged because their pessimism continues and they are continuing to be wrong. Up to now the people that have been running around like their hair is on fire, most notably the main stream media, have pretty much been calling the shots. This gives me hope that there might be light at the end of the tunnel possibly sooner than I originally had thought.

On April 4th the Idaho Department of Fish and Game suspended the sale of all nonresident fishing licenses indefinitely. You can read the directive here. I mentioned the fact that the Pandemic really got its legs in Blaine County in my last blog from first being transmitted from out of the area to community spread with the county ending up with more than 35% of cases in the entire state. I’m sure this new rule is an effort to encourage people from out of state to stay home. We are hopeful the state will lift this restriction in the not too distant future. The IDFG amended this rule on April 9th to allow nonresidents to purchase licenses under certain circumstances.

On a national level it was first thought that face masks or coverings were not warranted to stop or contain the spread of COVID-19. That has changed. With this in mind we are running a promotion with our buffs and neck gaiters. They will not offer the protection of a surgical mask but they can help block the virus and help prevent its spread. Our good friend Jerry Denson at onlyonflies.com has partnered with us so that we can offer one of his very attractive neck gaiters free with the purchase of any item from our online store including one of our own signature Henry’s Fork Anglers buffs at a significantly reduced price. Now you can look like a brown or rainbow trout if you need to go out in public.

As we’ve said before, we’ll get through this. We’re all in this together is a common theme that we’ve all heard many times and it is true. I’m confident that we’ll all be able to get back on the river in the not too distant future. Until then, hunker down, stay at home as much as possible and stay safe.