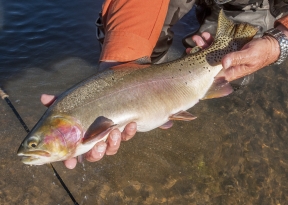 The Ranch continues to be nothing short of great! The mornings and evenings have been the most productive for sure. The flavs are here in good numbers. Fish a Berrett’s Flav Spinner in the morning. I would also have p.m.ds with you in the mornings. I would have both spinners and emergers. I would make sure you have some #16 p.m.d no-hackles as well. On the warm bright days things will slow down but as evening approaches the fishing will heat up again! A last chance cripple #16 and #14 will be a good bet as the flavs start to hatch. Some #16 rusty spinners will also work well. The caddis in the evenings has also been very good, a few #16 tan spent partridge caddis will come in handy. The flows will come up soon due to irrigation demand. It’s not going to be a huge increase but it will come up another 100 to 150 cfs.

The box still continues to be very consistent. I don’t have new information as far as fly patterns go. It has been a nymphing game. Small beads and of course rubber legs. I would also make sure you have flavs with you. The dry fly fishing will get better as you get near the take out.

The lower river continues to fish well. The better fishing as far as the dry flies go has been in the mornings and evenings. During the heat of the day you will have to get down with some nymphs. There are still a few goldens around and the caddis in the mornings and evenings have been good. The nymphs you will need are #18 tungsten torpedoes and some #16 and #18 hot heads. I would have some #16 and #18 red lighting bugs. I would keep an eye out for hoppers on the lower river, don’t be afraid to fish a #10 or #12 tan morrish hopper with a #16 brown zebra midge underneath.

The South Fork is on its way down. The projection show the South Fork coming down to around 12,000 by Monday. I will have a much better idea on what is going on by next week and will report accordingly.

The Teton has really begun to fish well. While the flows are still high the fishing has really begun to come into shape. Its been a nymphing game but look to see the dry fly fishing get better in the very near future. Go with the usual selection of small beads and do not forget to take some streamers with you. I would also make sure you have caddis with you. Go with a #16 E-Z Caddis and also have some #16 tan caddis emerges with you.

If you’re headed to the Madison, looking for some dry fly fishing, I would have some golden stones and yellow sallies. Don’t forget your caddis selection. Also keep in mind that you will be sharing the Maddy with a few hundred other of your closest fishing buddies. It’s just the nature of the beast. If you want to avoid the big crowds, then I suggest fishing the Madison early and late. In the mornings have a good streamer selection and some nymphs with you. I like the mini dungeons in olive and black. I also like sparkle minnows. I would have some nymphs as well. A #16 electric caddis with a #12 prince nymph will turn some heads. I really love the evenings on the Madison. The caddis action and produce some amazing fishing and for the most part you will have the river to yourself. Make sure you have caddis emergers and soft hackles. Fish both these patterns in the surface film. Don’t be afraid to swing soft hackles and caddis emerges.

This is the weekend I have been looking forward to all year. The Yellowstone River in the park opens Saturday! I expect the river to be big on the opener. Use caution when wading the river as the clarity makes it very deceiving, in other words it’s much deeper than it looks. I will go armed with both goldens and salmon flies. I will also have a few streamers in tow. An olive lil kim’s is one of my favorite. It’s also a good idea to have some drake patterns handy and bear spray is also a good idea!

The fishing on Henry’s lake has been hit and miss. The mornings seem to be the most consistent. I would have a good color selection of leech patterns and also some damsel patters. I would also suggest having midge larva in your arsenal. The gulpers have started on Hebgen and the mornings have been very good.