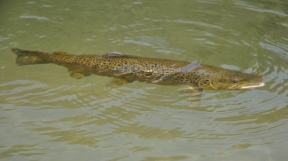 In my opinion there is no place like the Ranch in the world. What is better than taking a walk from the log jam down river scanning the water, hunting for that one nose. This year has been a great year on the ranch. Great hatches and plenty of large trout to cast to. We are just starting to see a few honey ants and the trico hatch has also started. The PMDs are still working and callibaetis are still around in good numbers. It’s a great time to be in this fabled section of the Henry’s Fork. I would have tan spent partridge caddis #16 and #18. Fish the spent caddis in the evenings. I shut the shop down at 7:00 pm and am usually on the water by 7:30 pm, by then the caddis are going really good. The spinner fall in the mornings and evenings have also been very good. I would have a good selection of #18 and #20 rusty spinners in you fly box. During the day I would have #16 and #18 pmds and some #16 honey ants. I would also have some #16 callibaetis. I think a few hoppers is also a very good

You will very successful in the box using the usual small bead heads and rubber legs that you will always hear me talking about in the weekly report, however this week it seems that many fish are looking up in the box. I would add some grand hoppers and golden stones to the arsenal. The flows in the Box are around 700 cfs so plenty of water to float.

The lower river is starting to pick up a bit during the day. I would stick with hoppers down lower. A #6 or #8 Morrish Hopper has been working well. I would also use the grand hopper on the lower river. An evening float from Ashton on down is a great idea. I would have the same caddis selection that I have mentioned above. The caddis on the lower river have been nothing short of amazing. Put a boat in at Chester and row up. You will find some large pods of trout eating spent caddis. Just like last week the midday fishing has gotten a little tough and you will have to do a hopper dropper combo. A #16 and #18 zebra midge will work well.

The Teton is just getting better. The PMDs have been very good. I would have some #16 no hackles and some #16 emergers as well. Some #16 limestone cripples is also a good idea. The nymphing has also been good good but plan on sorting through some white fish. I would make sure to have a few #10 purple Chubbys and some grand hoppers in the fly box. A evening trip on the Teton will also prove to be very effective. Take some #16 tan caddis emergers with you and swing them. If you notice fish rising and see they are eating just below the surface try swing caddis emergers through them. I also really like the orange /partridge soft hackle in this situation.

The South Fork continues to be primarily a nymphing game. I would have the usual selection of small bead heads and rubber legs. This can change at anytime however. I would guess that the mutant stones are close to hatching and pay close attention to riffles as I would think they should start to see a few Pink Albert’s.

The Maddy is fishing well despite all the rumors. The key is to be on the water early , take the afternoon off and then fish the evening until dark. The Madison has great PMD action from early morning until around two or three in the afternoon. If you can get back on the water around 6 or 7 then you will have great fishing until dark. If you venture down lower on the Madison and can be on the water around first light then you will have some great mutant golden fishing. I would skate a # 10 Berrett’s Golden Stone off the banks first thing. If you read my reports much than you know my choice for the pmds…that’s right, a #16 No- Hackle. I would also have some #16 emergers.

If you can make the trip I would suggest you hit Slough Creek. Make sure you have some attractors with you. A #10 purple chubby twitched across the surface will work well. I would also have some pmds in hand. The Yellowstone river has continued to fish very well. Make sure to have some streamers with you. I like coffee sparkle minnows and trout sliders. A double dirty hippy will also turn some of those big cutties. The #8 yellow moorish hopper has also been working very well on the Yellowstone River.

I would spend my time on Hebgen Lake. The lake is high so the callibeatis are not as concentrated as they were last year but the numbers of bugs are there. Concentrate your efforts in the arms.