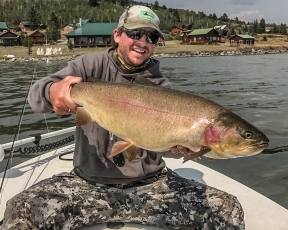 The evening fishing on the Ranch has slowed a bit over this week. While you will still see plenty of small fish on the rise, the larger fish have been very hard to find. Depending on the day however, the mornings have been good. Look for tricos and mahoganies. There are still plenty of pale morning duns around. As always make sure you have a few hoppers and some beetles with you. The aquatic vegetation is thick and trying to keep larger fish out of it once you hook them is the challenge. I would have some #16 Mahogany No-Hackles and #16 Last Chance Cripples. Tricos would be a good idea as well. lf you don’t know what to use try a size 16 Renegade. A #16 Griffith Gnat also works very well. The #16 callibaetis hackle stacker is a must have if you’re heading into the Ranch. This week has been a hot and smoky. That combination has not helped the fishing . There is a cooling trend coming our way and that should really help to improve your chances in the Ranch.

The Box remains about the same as last week. The hopper dropper combo continues to work very well. Make sure you have the usual small beads heads with you. Zebra midges in black, brown and red. A #16 two bit hooker is a nymph you need to have for all of our are rivers. In my opinion the two bit hooker is one of the best nymphs around. Flies seem to go in and out of style like shoes these days. Most of us have a favorite pair of shoes that we always wear, in style or not because they are comfortable and get the job done. That is how I feel about the two bit hooker! It’s fun to say and it’s one of the most productive nymphs in our shop!

Warm River to Ashton has picked up. As always you’re going to have to sort through some white fish and smaller trout but this week some of our guest have caught some great brown trout on this stretch of the river. The hopper dropper is a great way to catch a lot of fish. I would have a #8 near nuff hopper and drop a #16 red zebra in this section. A royal chubby will also work well.

The Jackson Hole One Fly contest will be held on the South Fork this weekend. As I have said before this is a great event that gives a lot back to the river. I had the pleasure of guiding a practice day with Simon Dickie from the Kiwi team on the upper end of the South Fork. Simon and his team are here from New Zealand, as you may have surmised from the name of his team! Simon among his other talents has won some Olympic gold medals in the sport of rowing. While the upper was a little tough I had a great time fishing with these guys. On the upper we had some success fishing with small beads. The “ditch” was very tough but once we got below the Irwin Slide the fishing picked up. Mike Lawson’s boat had great success fishing the #16 two bit hooker and in my boat we did very well with a #16 cocktail nymph. I think the better fishing on the South Fork will be in the Canyon. Look for fish in the riffles eating pale morning duns. Don’t forget the large attractor patterns like a #8 purple chubby or a #8 royal chubby.

The Teton continues to fish well into September. I would keep a sharp eye for the large drakes that will be hatching soon. In the mean time attractors like the chubbies I have already mentioned with a small bead head dropper will work very well on the Teton. Have some hopper patterns with you to. A #12 pheasant tail is a good Idea this time of the year as is a #10 Adams or a #10 split flag.

The Madison River continues to improve as water temps continues to drop. I would focus on the early morning streamer fishing. A wool head sculpin fished tight on the banks has worked wonders in the early A.M. I think the key with streamers on the Madison or anywhere else is to put them where large predatory fish are on the hunt and have multiple colors of your favorite pattern. The smoke from all the fires in Montana won’t be much different than it is here. I have seen it much worse for sure. Our prayers go out to all the fire fighters and everyone affected by all the fires.

If you have some time on your hands then get to the park! I think the choices in the park are limitless. The Madison in the park will just improve from here on out. Slough creek and the Lamar are also very good options. Don’t count out the Yellowstone river. I would take a handful of streamers to the Yellowstone River. As things continue to cool down and more fish will push into the Madison from Hebgen lake. It is a chance to catch a very large fish! This is not anything most of you don’t already know and with the fish come the crowds. Don’t let that stop you from fishing the Madison in the park. It seems most folks want to fish the fabled Barnes holes. There are other option up river from that area. Also the Gibbon is often over looked but keep in mind that many of the lake fish will end up there.

Look for Henry’s Lake to heat up soon. The fishing is slowly improving as water temps slowly creep down. I would suggest small bead heads. A #16 or #18 red zebra fished under a bobber or a scud will work well. I also like to strip zonkers in Henry’s Lake for large trout this time of the year. Hebgen continues to fish well with callibaetis and small bead heads.