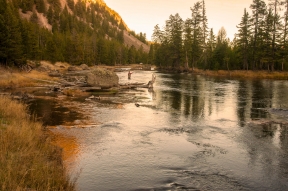 I am afraid this week’s fishing report is going to sound much like last weeks. I will tell you that the midge fishing in the ranch has been very good regardless of the weather. We are due for some nasty weather to roll in tonight. If this happens get up here with a handful of your favorite blue wing patterns. I would also watch for October caddis. I would have Griffith gnats in #16 and #18. If the blue wing are around I would have some #18 and #20 no-hackles.

The box fished great this past week and the fly of choice is a #16 and #18 brown zebra midge. As always have a good selection of small beads and don’t forget your #12 black rubber legs. We have been doing ok with streamers as well.

As it was last week the lower river continues to fish well. Look in the backwaters, like Chester and the fun farm to have consistent hatches of blue wings and midges. I would also have small beads like #16 cocktails nymphs and #16 and #18 brown zebra midges. Look for the better fishing to be on the overcast days.

The South Fork is about as good as it’s been all season. The hatches have been great. Look for blue wings in the riffles. I would also again make sure you have small beads. This is a great time of the year to be on the South Fork as the colors in the canyon are spectacular.

The Teton is also very consistent. Any guesses on flies? That’s right! Blue wing olives. Once again I just don’t have much new to tell you. I hope I don’t sound like I am down playing the fishing. It really is great. I would also keep watch for grey drakes.

If I was on the Madison, I would make sure I had plenty of streamers. I don’t think it really matters where you go on the Madison. It’s all fishing very well. I would also have the usual as far as blue wing olives and small beads. It sounds like the people hatch between the lakes has been awesome so if you’re looking for solitude avoid that section. I really like the wade section this time of the year so park at Reynolds and walk up or down and you will have some great fishing.

The park will close to fishing the first Sunday of next month. I would suggest you get yourself in the park before it closes and experience some great fishing. The People hatch in the park is nothing short of amazing, however the people hatch seems to be centered on the Barnes holes just inside the park. They all seem to emerge between 8:00 am to 9:00 am. It sounds crazy I know, but the good news is that the fishing in the park and on the Madison is good everywhere! If you want to avoid folks I would suggest the Yellowstone River in the park. You won’t get numbers in the this river but the ones you do get are amazing! I would make sure you have some Lil Kims if you choose the Yellowstone river. I would have them in both gold and silver.

Henry’s Lake is the spot if still water is your game. The fishing at the state boat ramp continues to be good but as you may have guessed that’s where everyone is at. I like the county ramp and then go to the cliffs. Scuds fished under bobbers has been working very well. Don’t forget the usual selection of leech patterns and I really like to fish zonkers this time of the year.