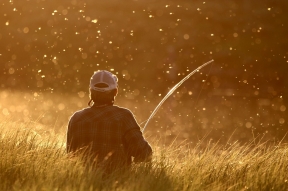 First off let me apologize to all who read my fishing report. I missed a week. It was a crazy week with the Ranch opener. It’s a great event that I always look forward to and to be honest I may have got caught up in the excitement a little more than usual. We have had some incredible rain storms over the last week and flows are a direct reflection of that. All of our area reservoirs are full or very close to full. So to make room, the flows had to come up. I don’t think we are home free just yet as it looks like we have more rain in the near future. Keep an eye on the flow charts. https://waterdata.usgs.gov/id/nwis/rt and also the long term effects will be amazing.

You will notice as of today that the flows will start to come back down some. I think you will the flows reduced down to around 960 by the end of the day. If you want to get daily alerts about the flows I would send Jamie Laatsch and the Henrys Fork Foundation an E-mail jamie@henrysfork.org and she will add you to the list. You will get an E-mail from her that informs of any changes in flows. While you’re thinking about it, join the Henrys Fork Foundation and give what you can. The Foundation is an amazing organization. See for yourself some of the work they do. www.henrysfork.org as the water in the box comes down I would fish some golden stones with a dropper of your choice. With green drakes just starting to hatch I would fish a #12 tungsten pheasant tail as a dropper. I would also have some #16 and #18 orange head Mary’s. I would also suggest some rubber legs and #16 electric caddis nymphs.

The opener was good to some and bad to others. That’s just the way the Ranch is. It was raining and the weather was a little cooler. If you’re coming to the Harriman any time soon I would make sure you have some green drakes. Lawson’s extended body green drake is a great dun. I would also have the last chance cripple in your arsenal and a Hudgen’s hackle spinner. Look for pmds and caddis throughout the day. Don’t forget some smaller beetle patterns is a great idea. Hopefully we will see flows stabilize but I wouldn’t count on anything. We have more rain in the near forecast

The lower river as of today is high and off color, however that will change in the near future. The gray drake hatch has been nothing short of amazing. You will also see green drakes and golden stones. You will also see flaves and pmds on the lower river. Don’t forget about caddis! Plan on seeing a few boats on the lower river. We are in the same situation as we were at this point last year. We are the only game in town. There just are not a lot of other options in the area. The Good news is the river is on its way back down and with any luck some other options will come into play soon.

The South Fork is at 19,800 cfs this morning. I would stay off it for safety reasons. Hopefully it will come down soon. We will keep you posted as things change

Still pretty big I think we should see the Teton come into shape very soon.

NorthWestern Energy had been holding flows back last week in order to fill up Hebgen and with all the rain we received it got to full pool in a hurry. With a full lake and a lot more water coming into it than they were letting out, it was time to bring up the flows in a big way and we are back to almost 3,000 cfs at the Kirby Gauge. Nobody knows when they will start to bring the water down, but our best guess is that it will start to drop over the weekend. Fishing in the upper stretches remains good to excellent, and we were surprised how many fish were still looking to eat today after such a rise. Nymphs and streamers are still the name of the game and will continue to be so until we start to see the river drop once again. We are still doing best on smaller nymphs in the upper wade section between Quake and Lyon’s, and while you can definitely get them to eat a rubber leg or worm right now the caddis and baetis game has really been where its at. Green and olive caddis larva in the #12-18 range have been on the menu over the last several weeks and basic pupa imitations like soft hackles have been getting it done during the afternoon emergence. If you head out earlier in the morning, we are still doing well on midge larva such as zebra midges and other small attractors. The float section has been a different story though, and we have been picking up fish on larger patterns such as rubber legs and worm imitations with far greater consistency. If you do decide to float, you’ll want to stay away from Lyon’s to Palisades until flows start to drop below 2,800 cfs as Sun West and Wolf Creek Bridges are still way to dangerous to float under right now. If you have a high side boat you may want to wait until it’s more like 2,500 cfs. The Big Nymphs are staging!

I would stay close to home if you’re going into the park. By home I mean West Yellowstone. The Madison and the Fire Hole have been fishing ok but things have been a little tough with all the rain. I really think things are going to really start fishing well in the park very soon. Keep an eye on the weather.