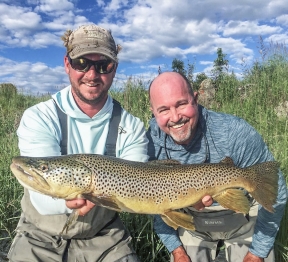 Depending on who you talk to, the ranch is either horrible or the best it’s been in years. Perhaps it’s because I’m a glass half full type of guy, I think the Ranch has been amazing so far this summer. The big rainbows that call the ranch home are tough, they always have been and I think they always will be. I have heard all the “big fish are gone” I have to disagree. The big fish are there. Sometimes you just have to work a little harder. This year I only fished the brown drake hatch twice. I saw plenty of large trout. I also saw large crowds. A few customers came in the shop with pics of very large trout. The biggest was close to 26 inches. The green drakes are still around and plenty of PMDs. Flavs have started to make an appearance and the caddis hatches have been amazing. I have noticed gray drakes around as well as yellow sallies. If you’re in the area, despite all the negative you may be hearing, I would suggest giving the Ranch a shot. Keep in mind the ranch is not an instant gratification type of fishery. Put some time in. Watch the banks close. I have been finding some great fish tucked in tight. Slow down a little and really observe what’s happening on the water. A $2.00 fish tank net might be the single most important part of all your equipment. Lastly I would say, make sure your hooks are barbless. That’s the law in the ranch. Land your catch quickly and keep em wet. If you need the hero pic, then hold your breath while you have the fish out of the water. Don’t forget some beetle patterns and I would some caddis as well. Watch for Flavs to hatch in the evenings and make sure you have plenty of Flav spinners in the mornings.

I fished the box this weekend with my friend Jana. I had my patience put to the test. While the Box was virtually void of fishing folks, it was a flotilla of water craft that could have competed with Mack’s inn. I even saw some folks come by in a giant inflated unicorn, yep a giant inflatable unicorn. I sat at the boat ramp for half an hour while two families prepared for a day fun on the ramp. I bit my tongue and waited patiently. After we launched I walked the boat up towards the dam. There were plenty of PMDs hatching and lots of smaller fish on the rise. What really got me excited was the amount of golden stones I saw in the air. We messed around with PMDs and golden stone patterns on the upper end and found a few fish that were willing to play. The tilt wing #16 PMD and a #16 olive Anato May Nymph worked very well. As we stated down we stopped in a few runs and fished a #8 rubber legs with #16 brown zebra midge. We continued on down and the golden stones really started coming. I even saw a few bats out eating goldens. We cut the nymphs off and tied on Mikes Henry’s Fork stone golden. Jana did a great job putting the fly where it needed to be. We had to sort through some smaller fish but she did hook into two trout that pushed the 18 to 19 inch mark. It was a great day in the Box.

If you’re planning on fishing from Ashton on down I would focus on fishing in the mornings and the evenings. Midday temps are on the rise and water levels have dropped somewhat. There are still some gray drakes around and again the caddis flies are thick. I think you could spent an entire evening just around Ora Bridge swinging soft hackles and fishing #16 spent partridge caddis. Midday I would fish #14 olive or brown zebra midges. Get them down deep. If the early morning is your thing then a streamer run might be in order.

The Teton has come into shape and is fishing great. The evening caddis have been thick and PMDs hatches are good. There are also a few gray drakes around. If you’re headed to the upper I think a handful of golden stones is wise. If you have time to head down to the Teton after work, I would have some soft hackles and some Mike’s caddis emergers. A high-vis caddis is also a good idea. Don’t be afraid to swing soft hackles or the caddis emerger. Sometimes dead drifting a caddis emerger under a dun or dry caddis will work very well. I would also have some #16 limestone cripples.

You can’t go wrong on the Madison this time of the year. You will find adult salmon flies from Reynolds Bridge to McAtee. Mike’s Henry’s Fork foam stone will get the job done for you. I would also have some #6 black rubber legs. The caddis hatches have been solid and I also have seen yellow sallies and a few green drakes in the walk wade section. There are also PMDs. Plenty of reasons to head to the Madison for sure.

The South Fork has also come alive. The water is still somewhat off color but the salmon flies are there. The flows are at 12400 and should stay that way for a while. I would have a little bit of everything for the South Fork. Pink Alberts and Salmon flies. I would have yellow sallies and golden stones. Rubber legs, zebra midges and two bit hookers. The South Fork should just get better and better as we go. The reservoir is full and water temps should remain favorable well into August and September.

This is an exciting time. The Yellowstone River opens this Sunday! My bet is the water will be high but there is always a few big bugs around on the opener. If you want to avoid the crowds then a trip up north would be a good call. Slough creek is high but the color is great. The Lamar is high and off color but if the weather pattern holds then that might change by the weekend. While the Madison and the fire hole have continued to fish well I would say in another week water temps might slow things down.