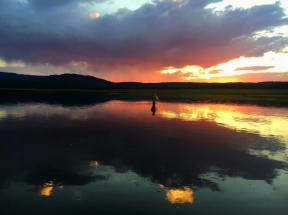 The good news about the Ranch is the crowds have all but disappeared. The current flows out of Island Park reservoir are at 1245 cfs. The Island park reservoir is still at 90% of capacity. Even better news is peak irrigation was last week so things are just going to get better. I fished the ranch the other night with my friend Jon Yousko. Shawn McKay also tagged along. We started down from the Log jam. Things started to heat up as we got down to hopper bank. I bet I spooked three really nice fish off the bank. The caddis were going good and there were drake spinners on the water. We got down to bone fish and that’s when things really turned on. Shawn and I spotted a nice fish working at the top end of an island. He’s all yours, go get him. Jon and I split up and I found another real nice fishing working close to the bank. The problem however, like a big carrier out in the pacific he was surrounded on all sides. I didn’t have a chance, the first cast I put over him a smaller 12” trout sacrificed himself for the cause. The big trout tolerated the commotion the first time. The next cast was right on the money but an 8” kamikaze ate my spinner as it drifted in close. That was it for the big boy. He had seen enough. He took his entourage and left for more peaceful surroundings. So it goes in the ranch. I took a beating! I can’t wait to go again. If you’re planning to come fish the ranch any time soon I would have caddis and flav spinners. I would also make sure to have some smaller hoppers and I would think we should start to see honey ants anytime.

The box is still fishing well. There are plenty of golden stones in the box and fish are still hitting them. I have done better in top half of the float with nymphs. I like fishing smaller nymphs like a #16 tungsten yellow jig and #14 rednecks. I also would have some #16 brown zebra midges. The second half of the box I have been fishing just a Henry’s Fork foam stone golden. Fish the banks tight but don’t be afraid to fish the deeper run in the middle. We should not see flows go any higher as the peak irrigation is behind us. If anything flows should start to come down.

I would not be afraid fish from Ora on down. I would suggest early morning or the evenings. The water temps mid-day are creeping to up so it’s important to get those fish landed quick and released back into the water soon. I would still fish with golden stones and there are plenty of hoppers around. The evening caddis hatches have been amazing all until dark. This is also a great time of the year to fish streamers on the lower river. Get up with the sun and go on a streamer run. You will have the river to yourself and you may just catch the fish of a life time. Bling’s and dirty hippies in different colors should turn a few heads. Don’t forget ole dependable, a copper zonker.

The riffles on the South Fork are starting to fish a little better. The river is still a little off color but all in all I would say it’s fishing pretty well. Flows are 12,360 cfs. I think the South Fork Fishes its best at around 10,000 cfs. The banks are fishing well with purple chubbies with #8 or #10 rubber legs dropped about three feet below. I would also pay attention in the side channels. I think some of the best dry fly fishing can be found in the side channels. Things should just keep getting better and better on this river. As we close in on the end of the month don’t forget about the mutant golden stone hatch.

We have run a few trips on the Teton this week and the fishing reports have been good to excellent. There is one issue to report. Above hog hollow the river is dirty. We are not 100% sure of what’s causing it but when we find out I will let you know. Chubbies and small nymphs like a #16 rainbow warrior have worked well. I would also have plenty of partridge caddis handy. The caddis hatches have been nothing short of amazing. I would also have some Pmds and rusty spinners. One of my favorite flies for the Teton is the lime stone cripple.

The Maddy continues to fish very well. There are still plenty of fish up eating dry flies. I would say that during the heat of the day things will slow down as far as the dry fly bite goes. They will of course still eat nymphs. The mornings and evening have been the best by far. Caddis and still goldens and a few salmon flies around. You will find pmds and flaves just about anywhere you look on the Madison. I personally like the evenings the best, not a lot of people around and the caddis fishing is phenomenal. I like to swing soft hackles

This is the first year I missed the opener of the Yellowstone River in the park for a long time. This year duty called so I missed it. Sounds like it fished very well. The big cuttys were eating a varied diet of pmds, salmon flies and goldens. There are also green drakes around. I think head way is being made in the Yellowstone River. Folks were catching fish from 16” to 24”. I think that is a great sign and I really appreciate how much work has been put into saving this amazing fishery. If you head up North to Slough you will find the water is a little high and a bit off color but the fishing has been solid. Look for green drakes and pmds. I would have some split flags if you’re heading in that direction. I think the park is as good as it gets right now.