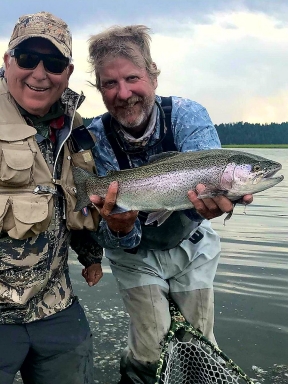 The Ranch is the spot to be! The irrigation demand has been dropping over the last week. In response the flows coming out of Island park reservoir have begun to drop. Current flows are 670cfs. The pmds are coming off in amazing numbers. I was in the Ranch on Saturday and after a storm passed through the Pale Moring duns came off in great numbers. Oddly enough there was myself and three other anglers. There were big fish eating all over! I found a real nice fish tight in on the bank and he ate my #16 pmd no-hackle on the third cast. The next bank feeder I found was 20 something inches and I screwed up and put him down on my first shot. I found pods of three and four fish cruising around like a pack of wolves eating every pmd in sight. The fish are looking up at hoppers and I would think honey ants should start to show up anytime. Be on the lookout for trico’s as well.

Fishing in the Box Canyon has been amazing this year. Plenty of trout looking up and eating golden stones. I was lucky enough to have my son and my daughter with me in the box canyon a couple of days ago and we had a great time. It’s an absolute joy for me to share time with my kids on the water. I am no purist by any means but when my 12 year old son suggested we only fish dry flies I was beyond proud and excited! We did not catch big numbers of fish but we got a handful, that were willing to come up and take a swipe at a #6 Henry’s Fork foam golden stone. My kids remind me of fledgling ospreys, they don’t quite have it all dialed in but are well on the way and when I am an old man and can no longer get it done myself I will have some of the best memories! If numbers of trout is the name of the game for you, then don’t forget to bring some bead heads with you. I would fish a #16 or #18 redneck or two bit hookers. I also am a huge fan of a #16 brown zebra midge.

The lower Henry’s Fork is still fishing well. We have had some great days from Ora Bridge on down. I would have some hoppers. The #10 sweet grass hopper and the #10 tan more or less hopper are my favorites on the lower river. Nymphing down low is going to get tough as the cabbage is going to snag you up. I would still fish golden stones. I would also have caddis and some rusty spinners for both morning and evening. Water temps are still within rainbow tolerance but I would get them landed quickly and get them released even quicker. Take the time to make sure they are upright and have recovered. I always say that if you need the arm stretch hero shot for a memory, hold your breath the whole time you have the fish out of the water.

It seems as though the riffles of the South Fork are starting to fish very well! This is great news. The pink Alberts are on the water and the cutties are eating them. I would have a verity of flies. A #16 brown zebra midge to start, As things begin to happen fish a pink last chance cripple. Once the duns are on the water then I like to fish a #16 pink no-hackle. Those of you who enjoy fishing the banks I would have a #10 Schroders hopper. I would also start thinking about the nocturnal golden stones. The before dawn trips are a lot of fun and the fishing is usually nonstop action. I would suggest #10 coffee and black rubber legs and #16 brown or red zebra midges for nymphs.

The Teton remains very solid. Pale morning duns and caddis hatches have been very good. I would also have some #10 purple chubbies for the Teton. I would say you will find plenty of rising fish regardless of the section you are fishing. Things will get a little tougher midday. I would plan on doing a dry dropper or straight nymphs. I really like #18 cocktail nymphs or #16 two bit hookers, not only is two bit hooker fun to say, but it’s a very effective may fly nymph. A streamer run on the Teton can also be very effective. If you can pull it off, do an early morning run on the Teton. I love fishing the copper zonker.

This is a great time of the year to be fishing the north east corner of the park. While we have been seeing some rain here in Island Park that corner of the park has been missed so the Lamar has been fishing well. I would always check the weather before making the trip however. Slough creek has also been fishing well. I would bring the usual selection of attractor flies but pmds drakes and caddis are a good call. The Yellowstone River in the park continues to fish well. It’s great to see this river coming back to what it once was. I am very encouraged to see different age class fish in the Yellowstone. I would have golden stones pmds and drakes if your heading that way anytime soon.