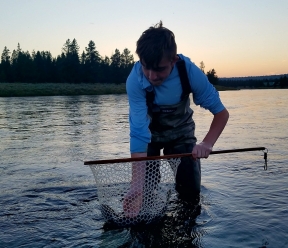 The Ranch is just getting better and better. I don’t know exactly why, perhaps it was the high spring flows that flushed out tons of sediment, Maybe it has something to do with two years of great snow pack. Maybe it’s the Henry’s Fork foundations work with the all the other people who also depend on water to make a living. I don’t know but I do know that results are amazing. I had the absolute pleasure of fishing with my son last night in the ranch. Perhaps it’s because he is my son but if I had the choice to fish with anybody on the planet I am sure I would pick my son to fish with. He is one thing that I had a hand in making that is perfect, I can say that about all my children. Things started out a bit slow as it was a blue bird day and there just was not much going on. As the sun started to fade things started to happen! We saw a variety of rusty spinners. We also noticed great numbers of caddis. It started like it always does in the Ranch, a few small fish started to rise followed by every little fish up grabbing whatever they could after maybe 15 minutes of little fish we started to see some bigger noses breaking the surface. The last 45 minutes of fishing light were nothing short of amazing! If you plan on visiting the Ranch in the next little bit I would have some hoppers. I would also have some #16 honey ants. I have not seen ants in big numbers yet but I would guess they should start shortly. I would also have plenty of pmds in #16 and #18s. I would have #16 tan and olive caddis and a good selection of rusty spinners.

The Box Canyon has been a very pleasant surprise this entire summer. I cannot remember a time in the box where so many fish were looking up. The dry fly fishing has been solid for the entire season. The golden stone hatch is finally on its way out but there are still plenty of trout in all size ranges looking up. The weekends have been very busy with pleasure floaters in kayaks, inner tubes and just about anything else that floats. I think fishing goldens and hoppers in the box is still a good idea. Bead head split backs are also a good idea if you want to dry drop. The early A.M. streamer run has been very good. Wool head sculpins in olive, black or tan have been very productive. Nymphing remains very strong in the box. Red zebra midges and hot head Mary’s have been the go to. Fish both patters in #16 and #18.

Warm River to Ashton is still the fish factory that it always is. Lots of smaller trout and whitties are eating a verity of nymphs. I would have #10 black and coffee rubber legs and again #16 hot head Mary’s. I would have #16 and #18 zebra midges in red and brown. If you’re looking for some of larger fish that call this stretch home I would fish hoppers. There are tons of grass hoppers down in the Ashton/St Anthony area and fish are looking up for sure. I think form Ora Bridge on down, the fishing has been at its best in the mornings and the evenings. It has been very hot this past week to maybe do Ora to Vernon in the morning and then Vernon to Chester, or Chester to Fun Farm in the evening. The evening caddis fishing has been spectacular on the lower river. I would have #16 ez caddis and #16 partridge caddis emergers. Make sure you have a good selection of hoppers with you. I like the more or less hopper and the sweet grass hopper.

The South Fork has really been great this last week. I did a trip from Cottonwood down to the wolfe flats. The pink Alberts were thick. The riffles and the banks fished very well. They were not picky. We fished pink no hackles and sparkle flags. The pink biot cdc emerger was probably the most productive. I would also have hoppers. I would think that the early morning mutant golden stone fishing would really get going anytime this week. I think the banks and the riffles are very good on the South Fork. If you want to nymph then a #16 Duracell and zebra midges would be a good call. I would alos have some bead head split backs in the same size.

The Teton has remained strong even through the hot weather. I would have the usual attractors, #8 purple or gold chubbies with a #16 bullet quill or zebra midge for a dropper. I would think that within the next week to 10 days that tricos should show up. Hoppers will also raise a few fish. Focus fishing on the middle and lower Teton. The weekends are a little tough as you will find plenty of folks just pleasure cruising. Again it has been very hot so mornings and evenings are your best bet for the Teton.

It’s August on the Madison, in years past that means things start to slow down. That is not the case for this year. Things have slowed down a bit midday but fish continue to look up for the typical attractors. I would have some #10 purple or yellow chubbies and some of Elden’s mutant stones. It seems that just about anywhere you fine trees you will also find spruce moths. I would stick to the upper Madison for the most consistent fishing. Nymphing on the Madison remains very good. I would have all the usual. My favorite on the Madison is a #16 brown zebra and a #16 red neck.

If you’re headed to the park anytime soon, make sure you stop by the Yellowstone River in the park. I would make sure you have some green drakes and gray drakes with you. There are still plenty of real big cutthroat looking up!! I would also make sure you have plenty of pmds and caddis. I would also throw a few flavs and some callibaetis in the mix as you’re most likely going to see all of these insects depending on where you go. The Lamar and Slough have also been fishing well and the Lamar is clearing nicely. As always keep an eye on the weather. It does not take much rain to muddy it back up.