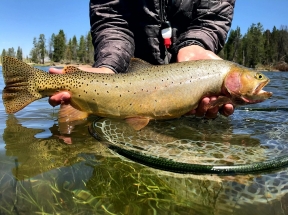 The Box access is still a no-go! It’s getting close but to get down to the ramp is just not going to happen yet. You can walk or drag a boat if you want. The take out is open and easy to access. The flow has come down to 1080 cfs as of yesterday and should remain at that flow through the weekend. I have seen a few caddis around and some blue wings have been hatching on the right day but have not found any of the bigger fish on the surface yet. I would make sure to have a good nymph selection and streamers are also great this time of the year. Rubber legs, bullet quills and zebra midges should do the trick. As far as streamers go pick your poison. Make sure to have a good color selection. Water is a little off color but plenty of visibility and should clear even more through the weekend.

If you can get out of the wind, the lower river has been the place to be. Look for caddis and March browns. Warm River to Ashton and on down to Saint Anthony has been fishing very well. I would have plenty of Hemingway caddis in 14s and 16s. A Moorish May March brown #14 has been working well. Nymphing double rubber legs is always a great option this time of the year as well. There is no need to be on the river first thing in the morning. Most of the dry-fly activity starts around 1:00 in the afternoon. If you’re on the water before that, streamer and nymphing fishing has been consistent. It’s a great time of the year to be on the Henry’s Fork.

The South Fork is starting to fish. Flows have dropped down to 13000. It’s a nymphing game. Rubber legs and zebra midges have been working very well on the South Fork. It’s also a great time of the year to streamer fish. There has not been much in the way of dry fly activity on the South Fork but if flows stay the same then there should be caddis soon.

Fishing on the Upper Madison has been solid lately despite the cold snap and brutally frigid winds that came in over the weekend and lasted through Monday night. Obviously you want to keep an eye on the forecast these days if you plan on floating, as 25-30 mph north winds are not anybody’s idea of a good time. The good news is that you can usually find a little shelter in the upper wade stretches as well as