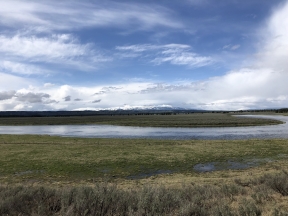 The flows in the Box are 711 cfs. They should stay that way for a while as they finish topping off the reservoir. Fishing has been very good in the Box Canyon. We have not seen much in the way of fish eating dry flies but the nymphing has been very good. I would have bullet quills and red necks. Tungsten pheasant tail jigs and red zebra midges have also been fishing really well. Don’t forget your rubber legs. I have been fishing black and brown #6. I did go with the Idaho Department of Fish and Game last week. We shocked and netted over a thousand fish. I don’t know for sure until I see the data, but I feel like the numbers of fish in the Box are going to be up from last year. I think we are seeing the results of three years of great snow pack and good water management. I always say, It’s an instant trout fishery up here, just add water!

The lower river has been fishing consistently. We have been looking but have not found adult Salmon flies in good numbers yet. We have been getting lots of rain/snow over the last week. Nights have also been on the cooler side. I have rolled rocks close to the banks and have found some nymphs but it seems like the majority of nymphs are still about 10 to 15 feet off the bank. I have found plenty of fish that are willing to eat rubber legs however. Fishing a number 4 Henry’s Fork foam stone with a 6 black or brown rubber legs has been very effective. There are also plenty of caddis, March brown and blue wings around and fish looking up. I think as far as the big bugs go, we may be out a week or two. I will stick with my prediction of May 24th.

The South Fork has been fishing very well. We have not seen much in the way of dry fly activity yet but the streamer fishing and nymphing has been very good. Rubber legs and bead heads have been getting it done. Hot spot yellow jigs, red necks and two bit hookers. I would also have some streamers handy. Black and white was the hot color last week but as we all know that changes daily. The river is around 12,500cfs and should stay that way for a while but always check flows before you head up there.

The Teton is on the rise and as of yesterday really dirty. I am thinking it will be awhile before fishing get going on the Teton.

The Madison has also continued to fish well. The river is up a bit but clarity is good. Still plenty of blue wings and fish looking up. I would make sure to have the usual nymphs with you and would add some San Juan worms to the mix. Don’t be afraid to strip some streamers on the Madison.