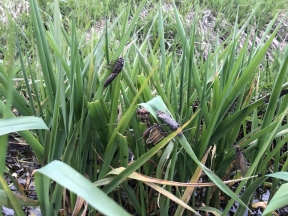 I would guess flows may increase a little this coming week. The fishing in the box has been very solid! It is still a nymph game. Rubber legs will work very well as the big bugs are making the annual pilgrimage to the banks. Dropping a 16 bullet quill or a 16 red neck behind the rubber leg is also very effective. Red zebra midges and Duracell’s in the same size is also a great idea. As you come down into the flat water around last chance things are also really starting to fish well. Yesterday was the first day I have seen the Mother’s day caddis in good numbers and some better fish were rising all the way down to the log jam. There are also plenty of May flies around. Both blue wings are March browns. No- hackles in 18 and 16 for the blue wings and the Last Chance cripple in a 14 has been turning heads when the March Browns show up. A 16 or 14 Adams has also been working very well. The weather is supposed to improve this week and I think the fishing will really turn on.

Sounds like the big bugs have arrived on the lower river. Reports and pics of big bugs are coming in from all over! It has been typical Memorial Day weather. Cold nights and rainy days have slowed things down for the adult bugs and I have not experienced that day where every fish is on the hunt for the big dries. Weather is a big factor for the salmon flies and with the warming trend that is allegedly heading this way in the next couple of days, things should really start fishing well. As far as where to fish? You will find them form lower Mesa Falls all the way down to Chester. Henry’s Fork Foam Stones and rubber legs will do the trick. A 4 foam stone with a 6 rubber legs dropped three to four feet down should do the trick. With the big bugs comes the big crowds. Please be mindful of one another and have some respect for fellow anglers. There is plenty of river and we should be able to share. If you’re not familiar with the etiquette of the Henry’s Fork then don’t be afraid to ask. Give fellow anglers plenty of distance. Don’t cut one another off. This is not the Green. I would say more than anything else treat everyone else the same way you would want to be treated. They used to teach that in school. I believe it was referred to as the Golden Rule. May not be politically correct anymore, I don’t know.

The South Fork continues this week to fish very well. The flows have stayed steady for the most part and the river is clear and fishing very well. If this continues we should have good conditions for salmon fly hatch this year. If you are heading that direction anytime soon have plenty of rubber legs and bead heads with you. There are blue wings around as well. Bullets, zebras and tungsten pheasant tail jigs will do the trick. Water temps should start to creep up so keep an eye on the riffles and side channels for risers.

The park opened to fishing this week. Sounds like the Fire Hole is the place to be! Plenty of blue wings around and willing fish. This is also a great time of the year to fish soft hackles. Partridge and orange in a 16 will get plenty of attention. 16 and 18 bwo no-hackles or split flags will also do the trick. If you can’t get them to eat the dry, don’t be afraid to fish a 16 or 18 cocktail nymphs. The Madison in the park is still a bit high but I think it’s fishable. Fish from the Madison Junction Bridge down towards where the Fire Hole comes in. Rubber legs and soft hackles. The Gibbon is high but fishable and I bet the Galatian will fish well with smaller bead heads and rubber legs. I would avoid the Lamar and slough creek for a bit as they are both big and off color. The Yellowstone River in the park will not open to fishing until July 15th Stop in the shop for a licenses and the latest regulations. Remember, no more felt wading boots in the park.

The opener on Henry’s Lake was a success! Plenty of big fish pics have been circulating around the shop and from the folks I have talked to there was all kinds of action. A black leech seemed to be the key to success. Apparently, there are in fact fish in Henry’s Lake. They did not all die as was rumored after last year’s slow opening day. Hebgen has also been fishing well. I would have chronomidges in the bays and along the banks have worked very well.