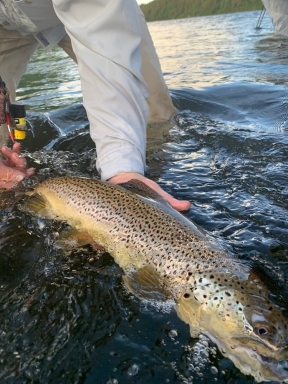 The big bugs have made it to the Box Canyon. Flows out of Island Park Reservoir have increased to 900cfs to match inflow. A dry drop rig has worked very well in the box. A 4 Henrys Fork foam salmon fly with a 6 black rubber legs will do the trick. Fish are eating the dry fly best about half way down. As always when in the Box Canyon make sure you have zebra midges and bullet quills and some AA split shot to get those small nymphs down in the heavy water. You may see flows fluctuate to match inflows over this next week. As you get to the flat water in Last Chance look for fish eating Mother’s Day caddis and March browns. There are also blue wing olives around. All in all I would say fishing on the upper Henry’s Fork has been great and should keep improving. Weather has been typical for this time of the year. Cool mornings and rain showers in the afternoon.

The lower river has been fishing very well. The salmon flies are still around in good numbers and golden stones should be right around the corner. I would also look for green drakes to make an appearance any time. Dry dropping has been very effective. Use the same rig I suggested for the Box Canyon. I would also have some Henry’s Fork foam golden stones with you. The caddis in the evenings have been good. I like a Lawson’s caddis emerger in a 16. I would also have some spent partridge caddis in the same size. Crowds should start to thin out somewhat on the lower river soon as the South Fork has been fishing well. Keep in mind that construction on the Ashton Hill has begun so expect some delays. To avoid sitting in line you may want to use the Mesa Falls route to save a little grief.

South Fork continues to fish well. Flows are 8,810 and should stay that while for a bit. The word on the street is that flows will not go over 14,000 this summer but let’s see what happens. It’s been a nymph game so far but on the overcast days look for a few fish rising on blue wings. The nymph fishing has been very good. Rubber legs and small beads seem to what’s for dinner. I would have #6 brown or black rubber legs. #16 Duracell’s and yellow tungsten jigs in the same size. Bullet quills and zebra midges are also very effective. I have also heard that the streamer bite has been good. I would try olive Little Kim’s or black skull heads. Yellow or peacock krelex has also been good.

The Madison is up a little with a little color but still fishing. Nymphs are also still the name of the game. The only thing I would add to list from above is a San Juan worm. I would also add tungsten electric caddis to the mix. As weather improves expect the Madison to continue to rise. The flows out if the dam are 1200cfs and by the time it hits slide inn the flows are 2000.

I don’t have much in the way of new information for the park. The fire hole is where it’s at. I would also have a look at the Gallatin in the park section. Once you get below Taylors fork things get big!

Henry’s lake continues to fish well. Stripping black seal buggers or midge pupa has been effective. Don’t forget to have some suds with you.

Still good reports coming from Hebgen as well. Midge pupa or
dry drop a red zebra midge. I would have leeches hand as well.