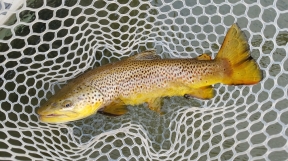 The crowds in the Ranch have all but disappeared but the fishing in my opinion has been really good. The hopper bite has been very good and I have also started to see a few ants and some tricos. I have really enjoyed going out on the breezy afternoons and fishing with smaller hoppers and beetle patterns. There are still a good amount of caddis around and the evening fishing with caddis emergers as well as spent partridge caddis has been good.

The Box has continued to fish well and I would stick with the usual. Little beads have worked well. A red neck and a hot head Mary have stood out. The #10 black rubber leg has also been doing well. Don’t hesitate to do the old hopper dropper technique. A #8 Morrish hopper with a red neck dropped about 4 feet down followed by a hot head Mary another two feet down works well. Often referred to as the triple threat. It has been getting a little chilly in the mornings but don’t forget about that early morning streamer run I have talked about from time to time.

Its hopper time on the lower Henry’s Fork. It’s getting a little tough to run a dropper as the aquatic vegetation is at about max. The hopper fishing has been very consistent. Don’t be afraid to fish caddis in the evening. Streamer fishing has also started to pick up on the lower river. Copper zonkers and the small blings.

The Teton has really been fishing well this past week. Hoppers and pmds have been very effective on the Teton. The weekends have been busy with pleasure boaters but as school starts for many people, we should see that start to slow down some.

The South Fork fishing remains very good. Plenty of pmds in the riffles and a raineys hopper has been working well on the banks. I would also guess that the mutant stones should start at any time. Small beads have been effective on the banks and off the drops.

It’s hopper time on the Madison. No rush to be on the water as the cooler mornings have kept the hoppers down until around noon. If you want to be on the water before that try skating a mutant stone. I would also have some ant patterns handy. I would not be afraid to fish streamers on the Madison. As always the caddis fishing has been great and there are plenty of pmds around. Don’t for get to have a few beetles in the fly box.

The park continues to fish well. The flows in the Yellowstone are on the way down and it seems as though a lot of the cutties in the river are slowly making the journey back to the lake. However you can still find fish in the river. This is the time of the year to start swinging flies. If swinging flies to giant cuttys is not your thing then I would look for fish eating pmds or caddis. A hopper dropper rig can also be effective. The Lamar has been a little tough this year due to all the rain. Check the forecast before hitting the Lamar. Slough creek has fished very well and the Gallatin would be my pick for this week. Try to get to the gate early and stay late! It can be slow going in the park if you try to get in after about 8:30. On a side note my hat is off to anybody who can balance on a toilet seat and successfully use the bathroom without falling in or falling off.