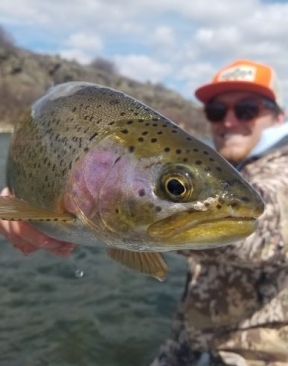 The Box continues to fish very well. The ramp is still inaccessible if you’re thinking about driving down but you can certainly drag a boat down. Plenty of midges on the top and as usual you just can’t go wrong with a zebra midge and a rubber legs. The amount of blue wings up here is amazing. If they are not taking them on the surface in the box then try a #18 cocktail nymph. Don’t be afraid to swing that nymph. Once you get down to the Last Chance area look for fish eating blue wings off the surface. A #16 no hackle has been doing the trick for me. Today the flows will increase another 100 cfs bringing the flows to 875 cfs.

Things have continued to fish very well on the lower river. I think anywhere you want go will treat you just fine. Plenty of blue wings around a few march browns and the Mother’s Day caddis is just starting to get under way. I did fish from Vernon down to Chester after work last night and I can tell you any bug that hatched during my time on the river got blown to somewhere in Montana! The wind was ripping to say the least! If you see March browns in good numbers and fish are eating the duns a #14 Adam’s is a good choice. If it’s blue wings stick with the no hackle. If the caddis are going in good numbers it’s hard to beat a #16 Hemingway caddis. I also like to have some olive caddis emergers handy. If nymph fishing is your thing, I would have some #16 and 18 electric caddis, #16 and 18 bullet quills and some smaller rubber legs. I also really enjoy swinging a partridge and peacock soft hackle this time of the year. Try that if you see the March Browns starting to emerge.

Nothing really new to report on the South Fork. The river has come up and that shut down the blue wing hatch. The South Fork is pretty much a bobber game this time of the year. Stick with the norm on the South Fork. Bullet quills and zebra midges. Rubber legs of course. If it aint broke no need to fix it!

If you headed to Montana today, after you self-quarantined for two weeks it would be May 4th when you could fish soooooo…..It should be good on May 4th