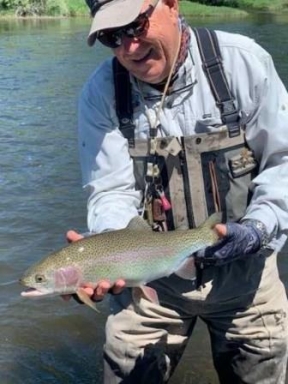 The Ranch opened with a bang! While I personally didn’t fish the opener, everybody that I talked to had good reports. Plenty of caddis around, some pmd’s as well as a few green drakes around. The weather also cooperated for the most part. The next day however the weather turned as it typically will this time of the year. We have been getting pounded with much needed rain and while it didn’t really slow the fishing in the ranch down it has most certainly thinned the crowds down quite nicely! The flows through the ranch are averaging around 900 cfs.If you are planning on being up here over the next few days make sure you have plenty of caddis in your fly box. I would also make sure to have some pmd,s and a few of your favorite green drake patterns is also a very good idea. Did I already mention flav’s? Bring em! I would say the dominate bug is the caddis. I love Mike’s caddis emerger’s size 14 and 16. I also like the spent partridge caddis. Harriman this time of the year might be one of the most beautiful places on the planet! Not only is the fishing amazing but the park as a whole. You can see elk, grizzly bears and deer. The bird watching is spectacular and the wild flowers are second to none. Don’t forget to look up every now and again and take it all in. We are blessed to have this stretch of the river.

I don’t have a ton of new info for the box canyon. There are still a few salmon flies around but I would look for the golden stones. The same beads will work for you. Bullet quills, frenchies and of course zebra midges. As always don’t forget the rubber legs. Due to covid the fish and game was unable to do their annual fish count for 2020 so we are not sure on fish numbers per mile in the box this year. We have had enough water left over from last year that we were able to run 500 cfs through the box all winter. This great news for the overall health of the river. At 500 cfs we usually wont the river up here freeze and the young of the year fish are able to find cover. I guess my point is that I am betting that the numbers of fish in the box are either up or close to the same as last year. Just a guess of course.

The lower Henry’s is basically bug soup. Most people are fishing from Ora to the Chester back water. Keep in mind there is an additional 70 miles of river to fish if you’re getting tired of the crowds. You will find all the usual suspects on the lower Henry’s Fork. Flav’s, green drakes and golden stones. You will also find caddis, blue wings and pmd’s. Don’t forget about grey drakes. Basically the fishing down there is as good as it gets and should be that way for quite some time.

The South Fork is close to salmon flies. I would guess around the 25th…ish. I really don’t have a lot of new info from my last report. It’s still been pretty much a nymph game on the South Fork. Look for that to change sooner than later.

The Madison has cleared and fishing well. The rubber legs and caddis pupa has been consistent. Don’t forget to take some soft hackles. There have some blue wings and a few pmd’s. As far as salmon flies go the 1st of July. That is my guess and it most likely will be wrong.

The Fire Hole and the Madison are your best bets in the park. The Madison is a little on the high side but has been fishing well with nymphs. Rubber legs and zebra midges have been the ticket on the Madison in the park. Prince nymphs and caddis nymphs, like Mike’s electric caddis have also been working well. On the Fire hole it’s been more of a dry fly game. Look for white millers and blue wings. You can never go wrong swinging soft hackles in the park.