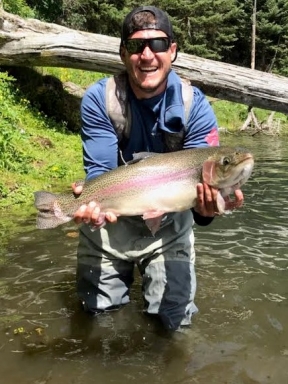 The water is up for sure! Flows out of the box are 1600cfs. We have to be getting close to peak irrigation but it’s always difficult to guess what might happen with flows. The fishing in the box has been really good. Last week a customer brought in a picture of a 26” rainbow caught in the box! What a great fish. He was fishing a rubber legs, bullet quill combo. Flows are high in the box. You may want to change tactics. Try fishing the banks at this level. A streamer off the banks could really pay off. I would also think about a golden stone with a dropper fished tight to the faster banks and off course continue to fish all the breaks and softer water. Have plenty of rubber legs and smaller beads. The bullet quill in 16s and 18s have really been working well in the Box Canyon.

The Ranch can sometimes be a bit more of a challenge with the higher water. Finding rising fish is the key. Really watch the banks when the flows are up. Some of the biggest fish in the ranch are the hardest to spot. The rise is very subtle. Take your time and really watch! There are still some green drakes around and the flavs have been steady in the evenings. If you find yourself out on the ranch in the morning make sure to have plenty of rusty spinners. I would have them in 18s all the way up to 12s. Hudgen’s drake spinner is also a must have. It’s getting very close to hopper time in the ranch so stock up on your favorite hopper patterns. Don’t forget to have a good supply of beetles as well.

The lower Henry’s Fork continues to fish well. I would make sure to have hoppers! It should be another amazing hopper year. The caddis continue to come off in good numbers. Bring the rusty spinners with you. If you go early fish some streamers and watch for rising fish. Plenty of pmds around as well as spent caddis. Nymph fishing in the back waters remains solid. The aquatic vegetation is going to really start growing in the heat of the summer. Use the heaviest tippet you can get away with and land those fish quick. Water temps are up on the lower river. Get them in quick and get them released quick. Pmds in 16s, golden stones in 10s, spent partridge caddis in size 16 and 18 is always a good idea Don’t forget the bullet quill nymph in 16s and 18s. Hoppers are starting and I like the thunder thighs hopper and the Morrish. Fish a size 12 or 14 hopper and they will get larger as the summer goes on.

The Teton has also been fishing well. The dry dropper continues to lead the charge on the lower Teton while the dry fly fishing is nothing short of great on the upper end. Fish a small hopper with a split back pmd dropper or a bullet quill. I would also make sure to have pmds and caddis patterns with you. If time allows for you to be on the lower Teton early in the day then do a steamer run!

The South Fork of the Snake is in great shape! Golden stones and Salmon flies will be found. Right now the hot spot is the upper part from the Dam down to the Conant area. However, tomorrow it might be the Canyon or Lower. I am betting you can find plenty of willing fish throughout the entire river. It is bug soup on the South Fork. Sallies, Caddis, Pmds and pinks! If you are on the upper, take your time as the salmon flies are showing up a little later in the day. Watch for fish on the shallow riffles sipping mayflies or the big caddis. In the heat of the day if you don’t see them rising then it’s time to switch up to the good ol’ dry dropper! Once again go with some quills. I would have bullet quills, fire starters, frenchie’s and flash back pheasant tails. Do not forget the rubber legs!

The Madison is also fishing solid! Still some Golden Stones and Salmonflies between the lakes and the caddis flies are thick! Pmds can be found all through the river. Last season was an exceptional year for hoppers and it seems to be heading that direction again this year. I would also make sure to have beetles. I would have EZ caddis and some electric caddis nymphs. Make sure you have partridge caddis emergers and spent caddis. Stick with the same nymphs standard nymphs such as the Rubberlegs and all the euro type nymphs. It is a bit crowed on the Madison so please be good to one another and show some respect to your fellow anglers.

The Yellowstone River opened this week and it did not disappoint. Plenty of pics and smiling faces in the shop. Some of the cuttys caught this week have been fish of a life time for lots of people. The salmonflies and golden stones where thick. Look for green drakes and pmds on the Yellowstone as well. I would avoid the Fire Hole this time of the year as the water is just too warm and can be fatal to over played fish. If you want to fish the Madison in the park I would focus efforts on the lower end. The Bares hole can fish well this time of the year. Again watch water temps and avoid going during the heat of the day. Slough Creek is a good bet and so is the Lamar. I would have plenty of Henry’s Fork foam stones in both the salmonfly and the golden stone. Green drakes and pmds are also a must have.