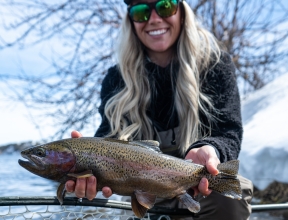 What a difference a week makes. Jenn and I took our usual tour of all the access points yesterday and I will tell you a lot has changed! Ora is now an option to launch your boat but four wheel drive is a good idea. The Vernon access is also open. If you are wanting to use Chester I would keep an eye on the weather. Ice can be an issue. Below Chester to fun farm is open. The ramp at the stone bridge is not yet open but that’s subject to change with the weather we have had. Jump off has been plowed but the ramp still has a sizable berm of snow so taking out is going to be a challenge but the Ashton ramp is open. The Box Canyon is still not an option unless you want to drag a boat down. Keep in mind you can actually catch fish on the Henry’s Fork without a boat! You can access all this water anytime you want by foot and catch plenty of trout.

I don’t have a lot of new information to report on the Box. Water temps have dropped some due to all the melting snow but there are still plenty of midges around and there are fishing up eating them. The nymph fishing is still affective but slowed some due to the colder water temps. Keep in mind this changes almost daily. I still have yet to see the blue wings in good numbers but I bet they are close.

Again not of new information other than the ramps that I mention above. I did roll some rocks and found a good bunch of March brown nymphs and blue wing olive nymphs. There were also a lot of skwalla nymphs close to the bank. Tight lining a couple of size 10 or 12 brown rubber legs might really be good on the lower river. I would also have some pheasant tails in a number 12 and 14. The usual pertagone’s in 16 and 18s and zebra midges.

The South Fork fished well this last week. All the access points are open. One of our guides Paul Hoelscher fished the South Fork yesterday and had a great day. He mentioned that he had to sort through a bunch of whitefish but caught some good trout. He was using a number 12 pheasant tail with a number 8 brown rubber legs. Hot head Mary’s and red zebra midges were also a good choice. The flows are low at 1700 cfs so you may need to drag the boat in a few spots.

To be honest with you all I have not fished the Madison in a minute but the word on the street is that not much has changed from my last report. Look for fish eating midges and little brown stones on the surface. Rubber Legs and small bead heads will do the trick subsurface. The hot head Mary has really been working well on the Madison. Keep in mind the spawn is going so be mindful where you walk.