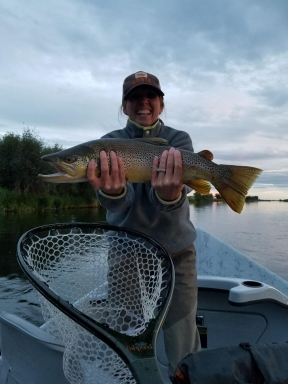 The Fishing has been nothing short of grand on the Henry’s Fork. Green drakes, golden stones and pmds. There are flaves and caddis. Basically, a bug buffet and the trout are lined up like pigs at a trough. The box has been a nymphing game on the top end and there is some good dry drop activity about halfway down. There are still some golden stones around. I would guess that flows in the box will rise any day. Flows are currently just over 800 cfs.

The Ranch is open and ready for business! Look for green drakes and pmd’s. There are a ton of caddis around. The 16 splitsville caddis has been working very well. I would also have some pmd no- hackles. Green drake duns and last chance cripples will also work. I would also have drake spinners. It will be busy in the Ranch this weekend. Be good to one another and respect one another’s space.

The lower river has been very good. I have really enjoyed wading around hunting fish on the lower end. It will amaze you what can be seen when wading the Henry’s Fork. There are plenty of golden stones on the lower river and you can go wrong with a golden foam stone fished on the bank. I make sure to have some 14 rusty spinners. Green drake dun’s and emergers. There are plenty of caddis around and fish are eating them. Don’t be afraid to drop some nymphs if you have a picky fish.

Fishing on the South Fork has been picking up on the South Fork. Flows have been steady around 1300 cfs. It’s going to come up. I know there are all kinds of rumors that flows are going to stay the same all summer but I will promise they are coming up. There has been some top water action on the lower river. Fish are looking up. Smaller water walkers have been working and there has been a little pmd action in the riffles. No reports of salmon flies yet.

There are reports of salmon flies around the Ennis area so I would have a good handful of rubber legs and some foam stones. There are pmds and caddis and fishing has been good. The dry fly fishing has been at it’s best on overcast days. The streamer fishing has also been very good on the Madison.

The Fire hole has been the place to be. White millers and soft hackles have been the ticket. The Madison and the Gibbon have also fished well. I would also go have a look at slough creek. Still a little high and maybe a bit of color but I would not be afraid to have a look. The Lamar is usually about a week behind. It is crowed in the park to I would be to the gate early. Remember the Lamar and soda butte are usually about a week behind.