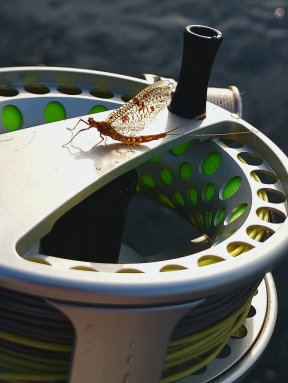 The Box has fished more consistent this past week than it has all year. Flows are still fluctuating; and I would guess they will continue to increase as irrigation demand will be on the rise. Current flows out of Island Park Reservoir are 1000 cfs. Have some Henry’s fork foam golden stones, rubber legs and bead heads with you. I would recommend switching to green drakes as you come down on the lower end of the box float. Look for fish rising along the banks. This is also a great time of the year to do a sun rise streamer run in the box. There are plenty of bugs around so get in there and have a great day!

What a big difference in a week! It’s like a switch has flipped! Green drakes, flaves, and pmds showed up in good numbers. The brown drakes have arrived. Make sure you have plenty of rusty spinners in various sizes. I would recommend taking some green drake emergers, Duns and spinners. I would also recommend the Lawson’s drake, Last Chance cripples, Hudgens spinners, D&D cripples and limestone cripples. Don’t forget caddis! The Hemingway caddis is a fantastic choice. Brown drakes have been very good over the last 24 hours. Duns and cripples in the evenings and spinners in the morning! The whole ranch is fishing well so spreading out is not a problem.

It’s been a tough month in this section of river but things have turned around. The dry drop technique has been very effective, drop a Duracell below a foam golden stone or just run a rubber legs with a bullet quill below a bobber. I will tell you that stretch has become a very popular destination for other kinds of recreational floating. You will encounter plenty of innertubes rafts and any sort of floating water craft. They will run into you, they will be yelling, screaming, drinking and cussing. It is what it is as it’s public land….I am a big supporter of public land! However, there is always bad actors in every group of users. Try to be patent. The way to avoid the crowds is to put in early or later and avoid the weekends.

Fishing in this section has been solid. Green drakes and gray drakes are hatching daily. The morning spinner fall has been amazing. Plan on seeing drakes and pale morning duns between 9:30 a.m. and 11:00 a.m. I would recommend having a variety of sizes of rusty spinners, size10 Hudgens’s spinners, and size 12 renegades. It’s busy on the lower river so again be good to one another.

The salmon flies have appeared on the South Fork. Flows are 10700 cfs and I could not tell when they are going to come up but take advantage of these flows while you can. I would fish Cottonwood down with a Henrys Fork foam stone with a rubber legs dropper. I would have some yellow sallies and pmds. Fish the riffles, the drops, and of course the banks.

The Teton has come down to around 1000 cfs and is fishing well. We have been running trips on the lower end and having some great days. I would have some Rosa’s pink bead, bullet quills, and purple chubs. . If you can get on when the wind is not howling look for fish up eating pmds and gray drakes.

Sounds like the Madison has come into shape. Reports of salmon flies have been coming in. Stick to the tried-and-true foam stone with a rubber leg dropper, with any luck you can cut off the dropper and just stick with the dry. Sounds like caddis flies are hatching in good numbers as well. Look for salmon flies from Ennis up to windy point.

The Madison and Gibbon have been fishing well. The Yellowstone River in the park opened on the 1st of July. The river has a lot of water in it and sounds like fishing was tough. Folks did scratch out a few, fishing with rubber legs and bead heads. I would recommend using the salmon fly dry dropper rig on the Yellowstone River. The Fire Hole is warm and I would recommend fishing early or later in the day. Duracell nymphs, white millers and bullet quills will do the trick on the Madison inside the park. Seems as though the buffalo in the park have had enough! Maybe they have finally organized, I don’t know. Just remember this while you are enjoying Americas first national park. If it has horns, teeth or claws stay AWAY!! Also if any of the above is approaching you then you need to GET OUT OF THE WAY!