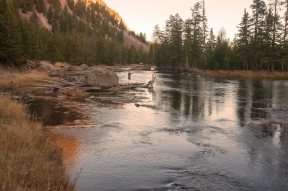 The fishing in the box has improved greatly. Fire starter jigs and smaller rubber legs have been doing the trick! Water is now come through the power plant so clarity has improved greatly. Current flows are 930cfs and the dam is 50 percent of capacity. That is great news considering the current drought we are experiencing. Labor Day is behind us and the crowds should start to thin out a little. The nymphs to have been red necks, fire starters, and smaller rubber legs. I would also have the old dependable zebra midges. Be sure to throw some hoppers in the mix.

It has been hot out! The temps are reaching into the 90s and that makes fishing tough. However! Things are picking up a little. The hopper fishing has been improving by the day and I really think we are lining up for some great fall fishing. As always it is all weather dependent. If it will cool down and maybe rain, I think the fishing in the ranch is going to improve drastically. Make sure to have some hoppers and beetles with you. There are still a few tricos and I’m still seeing a honey ants. I am looking forward to some cooler weather mohoganies and blue wing olives. The aquatic vegetation is starting to die off adding more of a challenge to the fishing. Hang in there! Its normal and will subside!

The warm river to Ashton section has been tough the last few weeks. Temps have been climbing up to near 100 degrees during the day and effectively shutting down the fishing. The good news is this stretch is starting to slowly pick up. Mornings have been best for the dry fly fishing. Make sure to have hoppers and small beads with you. I would try to go early and be off the water by 2 or 3. The weekends have still been busy with the rubber hatch but if temps will come down and we can get some rain the rubber hatch should really slow down.

This section is best fished early. The hot weather has affected the lower river as well. So, if you can go early, I would suggest you do. We have had good success early in the day with hoppers. As it starts to warm up the hopper with a nymph dropper is a great technique. The aquatic vegetation is going to make fish tough in this section. Plan on cleaning off your fly after every cast dry fly or nymphs.

It is the weekend of the One Fly! A great event that raises a lot of money for the resource. Good luck to all the teams. The South Fork is running 11,000 cfs and will probably stay that way for the next little while. I see that American Falls Reservoir is only 5% of capacity and both Jackson and Palisades are around the mid 20% of capacity. The irrigation demand should start to decline soon but I do not know what the plans for the flows are on the South Fork. While 24% of capacity is not a lot of water, it is a lot more then I thought there would be at this time of the year. Pray for snow to come in feet this winter! Use the same tactics on the river. Go at first light and skate Eldens mutant golden stones off the bank. As the day begins to heat up fish hoppers on the banks and the hopper droppers in the riffle water. Drop small black rubber legs and red necks. Bullet quills and zebra midges are a great choice for nymphs.

Fishing on the Upper Madison has improved over the last week due to cooler air and thus cooler water temperatures, but we have another week of hot weather coming our way according to the forecast. We are looking at highs in the low to mid 90’s through early next week so you’ll want to get on the water early as the fishing will get pretty tough around 3:00 pm until we start getting some colder nights again. The good news is that we received another 150 cfs out of the dam this week, so flows on the Madison are still in great shape heading into September. Most of the good dry fly fishing to be found is still in that 11:30 am – 2:30 pm range and we have seen more fish coming up for ants, attractors, and small hoppers lately and in that order of productivity. We have had good streamer fishing from dawn until around 8:00 am and some decent mornings with nocturnal stoneflies, but the mid-morning to early afternoon window is still your best bet. Fish just seem to be turning off once water temperatures start to get around 68 and above, so take a break and let the water cool down a little before heading back out for the last couple hours before dark. The upper wade section between Quake and Lyon’s Bridge is still predominantly a nymph game, with small Bullet quills and zebra midges. We have had decent dry fly reports on ants and small attractors like Eldens mutant stone and purple hazes but the hopper bite just isn’t there this year. We are picking fish up in the float stretch on similar patterns and the ant has been bringing up a lot more fish than the larger hopper patterns this week.

The fishing in the park has been ok. The Hebgen lake runners are starting to show up in the Madison river. The temps are coming down starting soon. There is no hoot owl restriction in the park this week. Tan hoppers with a mic drop or olive bullet quill nymphs has worked very well. The Firehole river is still too warm. The meadow section of the Gibbon has been fishing well with hoppers and beetles. The Gallatin is worth a look but don’t worry about being on the water until after 10 am. Pink thunder thighs hoppers Mikes hi vis beetle.