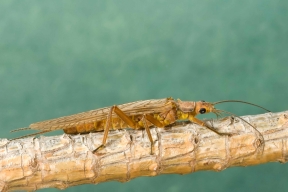 June is here! It’s a beautiful time of year in Island Park Idaho. Mule’s Ears and many other wild flowers are in bloom. Cow elk in Harriman State Park are starting to calve. It a time for new life and I guess new hope! It seems as we go into June that the weather is warming up and so is the fishing. I think both April and May fished great and I am excited to see what June will bring us. Things are most certainly happening at least two weeks ahead of time. The salmon flies are done on the lower river and the golden stones have begun to make an appearance. We are also seeing good numbers of PMDs as far up as wood road 16. A few green drakes are also being seen on the lower river around Saint Anthony. The ranch opener is right around the corner and I for one can’t wait! There is nothing better than large trout eating flies on the surface. Come on out and experience it! You can watch large rainbows eating flies on the surface like popcorn, string your rod up. Select a pattern that will most likely be the wrong one, make a cast and do everything just right and Bam!! You will get refused and not just once but many times! The Ranch will provide you with hours of frustration. If you’re both lucky and good you just might connect with one of the most rewarding trout on the planet. If you don’t connect do not give up! Come in the shop and let us try to help you it figured out. When it comes to the ranch I don’t think you will find a more special place on Earth and even just writing about it gives me goose bumps!

The Box is having some ups and down today. The dam is having some issues and flows have been fluctuating wildly. To be 100% honest with everyone I am about as pissed off as I can be about it but I am going to stick to just giving you a fishing report. When the issue is fixed and flows stay steady I would look for salmon flies to come in good numbers. A few of the big have been spotted in the box but the majority of the hatch is yet to come. Fishing rubber legs in the runs is the ticket. #6 Black Rubberlegs have been turning lots of trout in the box. We have also been doing well with streamers. Mikes wool head sculpin has been fishing very well and I have done well with a Copper Zonker.

Fishing from the log jam on up through Last Chance has been consistent in the morning and evenings. The midafternoon wind will slow things down a bit but when the wind settles down look for risers. A # 16 tan spent wing caddis will do the trick! I would also have a selection of larger ants and beetles. I have also seen a large amount March browns in the mornings and good spinner fall in the evening. Wood road 16 has been fishing well in the mornings. Both p.m.ds and b.w.o. emerging from 8:00 am until roughly 10:00 am or the wind puts them down. I truly believe these are some of the toughest fish on the Henrys Fork. Bring you’re A game to Wood Rd 16 I have watched trout come up to well-presented flies and knock them out of the way! I would come armed with a good selection of emergers. The #16 lime stone cripple is one of my favorites. I would also have Last Chance cripples in #16 and #18 handy. Beetles and Ants are also a good idea. Cfo Ants and burnt toast ants in #14 should turn some heads for you. Large black carpenter ants have taken to the sky over the last week and even the wiliest trout is a sucker for ants.

The Warm River to Ashton stretch is still a fish factory. Despite fish numbers being down slightly it continues to be a very productive stretch. Look for golden stones and pmds. A #8 Henrys Fork golden foam stone has been very productive. I would also keep an eye out for green drakes in the very near future. Pmd hackle stackers and split flags in #16 will do the trick. I would have some # 12 pheasant tails and #16 two bit hookers.

Ashton dam on down through Chester has also been consistent. I don’t think you will see much different as far as fly selection goes, the only thing I didn’t mention was caddis. An often over looked but super important part of a trout’s diet. Look around in the grass and willows along the river banks and you will find a minimum of four different species of caddis. Spotted sedge and grannom just to name a few. I think Mike Lawson’s caddis series are a must have. EZ Caddis, spent wing partridge and caddis emergers will generally work well. I always have all these patterns in my fly box and I use them frequently. From Chester on down look for pmds and goldens. The Fall River may still be putting in a little color this week as temps have come up

The Teton has come up a bit this week as the warmer weather has arrived. It is still fishable and a float from X-wing down to beaver dick is a great idea. The Teton is not seeing much in the way of pressure yet so if you wanted to get away from the crowds on the Henrys Fork than the Teton is the place to be. I would come armed with a variety of streamers. Zonkers and hippy stompers have been working very well. I would also have some sculpins with you. Stick with tan or olive. Lil Kims in both silver and gold have also been working well. I also like crawdad patterns on the Teton. Ritts fighting crawfish is a good choice. You may also want to try a mouse pattern on the Teton. You may see the fish of a life time chase down a deer hair mouse skated along the surface of the river

The wade section of the Maddy has been fishing very well. While there has not been a ton of dry fly action the nymph fishing has been outstanding! Rubber legs and prince nymphs have probably been top choice. Remember your caddis selection for the Madison. The river between Lyons and Windy point is still off color. Black #6 rubber legs and #12 and #10 prince nymphs on the upper Madison.

The Firehole seems to be the place to be in the park. Fishing in the mornings and evenings is the ticket for the best fishing. The caddis hatches have been consistent and there are still blue wings. Things may slow down a bit during the heat of the day but should pick up again as things cool down. I would swing a #16 tan caddis emerger through the riffles and runs in the fire hole. I would also have have some soft hackles. My favorite is the partridge and orange. That is another great fly to swing through runs and riffles.

I have not gotten much in the way of reports from Henry’s Lake. I would expect that we should start seeing damsel nymphs anytime know. There has been some great midge activity in the mornings and evenings. I was on the lake last week and the last two hours of light where very good. We caught fish with Pops Root beer and orange buggers and also had some eats on olive bead head buggers. I would also have seal leeches in tan, black and olive. We have really added some great lake flies to the mix here in the shop so stop by and let us show you what we have.

Hebgen Lake has had some amazing midge activity. I would say that the evening fishing on Hebgen has been the most productive. Black zebra midges fished under a bobber will produce strikes and as it continues to warm up look for the gulpers to get going.