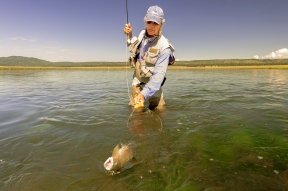 For reasons not fully understood, the Henry’s Fork outflow from the Island Park Dam has cleaned up significantly. A week ago the water was green and dingy looking which made for some tough times in the Harriman Park section of the river. Melissa Muradian published a great blog on the Henry’s Fork Foundation website which gives detailed information on why the water has been off-color along with a lot more detailed information. Here’s my take on it. It may help to refer to my blog written on May 21st on our website.

Data shows that the average drawdown for irrigation over the 83 year period of data for the Island Park Reservoir doesn’t get started until late June/early July. You can check this out on our website by looking at the Island Park Reservoir graph. What else you’ll notice is that the average drawdown isn’t as steep as it has been in 2015 and 2016. By the end of the irrigation season the remaining storage in the reservoir is normally around 60,000 acre feet. The graphs for 2015 and this year show a different scenario. The reservoir is losing storage at a much higher rate than normal. In 2015 it was down to 60,000 acre feet by the end of July and it is very likely it will do the same this year. By the end of the irrigation season in early September it was down to 40,000 acre feet and it is likely it will be the same this year. In fact, up to now last year and this year have been very similar with regard to the operation of the Island Park Dam.

Earlier irrigation releases and higher flows worked out pretty good in mid-June when most of the complaints revolved around the river being too low. Now the payback has resulted in higher flows than normal and much earlier than normal. It helps to understand that there is a river channel in the reservoir above the dam that is very similar to the river channel below we know as the Box Canyon. When the reservoir gets low early in the season several things happen that can have a very negative impact on the fishery. Less water volume in the reservoir coupled with high outflow results in water movement in the old river channel which stirs up accumulated algae and other organic matter. On top of this less water in the reservoir and warm mid-summer air temperatures can result in more rapid growth of organic matter. In other words, the better then sun can penetrate the water the more stuff grows.

With Melissa’s blog along with a basic understanding of the operation of the Island Park Dam, it isn’t difficult to understand why in July the water has been turbid the past two seasons. What I don’t understand is why it has cleaned up after only a slight reduction in outflow from the Island Park Dam. However, I’m not complaining in the least. We often help run shuttles for our guides floating the Box Canyon which allows us to check the outflow. We were amazed to see how the water cleaned up so quickly. The result has been a marked improvement in the fishing through the Box Canyon and especially through the Harriman State Park.

It’s been a week since our last fishing report. A lot of stuff has changed for the better since that report so it is important to update the report again this week.

What happens in Box Canyon doesn’t stay in Box Canyon because the river from Pinehaven downstream to the confluence with Warm River is very much the same. While you may get an eat or two blind fishing Golden Stones, your best bet is to use nymphs. We like a double nymph system with an indicator. You’ll need some weight to get your bugs down because even though things have cleared up, the outflow from the dam is still about 130 cfs above normal at 1420 cfs. I like to drop the nymphs at least 3 feet below the indicator. Best patterns are black or brown rubberlegs in size 8 or 10 with a beadhead nymph dropper tied from the bend of the hook a foot below. Two Bit Hooker, Flashback Pheasant Tail, Zebra Nymphs in olive, red or brown should provide plenty of action.

Now that the water has cleared the fishing has really turned on. Higher flows are now working in our favor keeping the water cooler and providing more security for trout. We’ve seen good PMD and Flav spinner activity in the morning and evening hours. We’re also starting to see some Callibaetis in the interior of the Ranch. PMD duns have been showing up throughout the late morning and early afternoon hours. One of the detriments to great dry fly fishing has been the wind. I’ve lived here all my life and I can’t remember a summer with more wind. For that reason alone, I would carry plenty of terrestrials in my fly box. Trout will sit in the slicks near the bank and sip everything from minute ants and beetles to larger hoppers. You’ll have to look long and hard to see the soft, easy rises of these trout

The slide below Lower Mesa Falls at Cardiac Canyon is still worth the trouble. Further down the Warm River to Ashton section has been productive as is almost always the case. Year in and year out this section of the Henry’s Fork provides some of the most consistent fishing in the region. It’s moving into hopper season. A hopper/dropper rig with a beadhead dropper a couple of feet below a high floating hopper will get plenty of action as well as a possibility to hook a monster brown. If the weather clouds up don’t hesitate to tie on a streamer. I always carry a RIO sinking leader that you can loop to the end of your flyline which will help get the fly down fast and deep.

The Henry’s Fork below Ashton has really hit the skids. There are plenty of other options. As is often the case, the water gets weed choked and the hatches dwindle. Wait until we start getting some cool nights again which will kick the tricos into happy mode. That normally happens in mid-August.

Best words to describe are awesome, grand, great, kickass, etc. We didn’t know quite what to expect this year as there is ongoing work on the Hebgen Dam and it will be ongoing through the 2017 season but so far, the Madison has produced some of the best fishing we’ve seen in the past few years. Probably the best dry fly fishing has been in the evening hours when the caddis are active. The summer stones, commonly called nocturnal stones have also started showing up. These guys are also important on the South Fork of the Snake. The males have small mutated wings or no wings at all. They hunt their mates down by scampering across the rocks and often into the water. That is the stuff excitement is made of for a hungry brown trout. There are also some golden stones hanging around as well during the day. We’re also starting to see hoppers. In my mind this is going to be an epic hopper year.

Things have slowed a bit on the bottom half of the river due to lower flows and warmer water temps. You can still catch a few fish with a chubby / dropper nymph rig. Best fishing has been in the morning and evening hours. The canyon is good but watch your step. It’s not unusual to encounter a big rattlesnake in this section. My favorite water this time of year is the Upper Teton near Driggs. There is plenty of good wading access as well as some good float sections. The water is pretty low and the larger trout are a bit selective but there are still some decent hatches of PMDs, caddisflies and a few golden stones. The downside of the upper river is you’ll have to share your day with lots of recreational floaters. I hooked a cute paddle boarder on my backcast the last trip I was there but she broke off on the second jump. The amazing thing is they don’t seem to bother the fish. It usually takes less than five minutes and the fish are feeding again. What I don’t like is the noise. You can hear them coming from far upstream. I can live with the yelling and loud talk but I don’t see why everybody has to listen to the same music when a good set of earphones will do the job.

The bank fishing has slowed up some now that the stonefly hatches have quieted down. By now all the trout that live next to the banks have seen every chubby, fat albert, and stimulator ever invented. However, it is still worth working the banks as there are still a few stupid fish hanging around the banks. The bank fishing will start to get better again with the advent of hopper time. This promises to be a great hopper year. The summer stones will start showing up, especially when the flow is reduced exposing more gravel bars. The best fishing with these crazy stoneflies is at dawn or just before dark. The riffles have been fishing well with PMDs, Pink Alberts, and Yellow Sallies.

You’ll have to fight some traffic if you don’t get into the park early in the morning. It’s well worth the drive to the Yellowstone River, the Lamar River, Slough Creek, the Gardiner River, and other lesser known waters in the Northeast corner of the park. There have been golden stones, caddis and PMDs coming off on the Yellowstone. The river got a pretty good dose of fishing pressure on opening day. I know, I was there but the fishing was better than we’ve seen in years. Check out our last blog about the Yellowstone. It was so good I was back again this week. Unfortunately there was a raging downstream wind that made mending line virtually impossible. Those big cutthroat had wised up enough to know that a perfect imitation of the golden stone, like our Henry’s Fork Foam Stone, wouldn’t cut it unless it was a perfect drag-free presentation. Next to dynamite, this pattern is the best weapon in the box but not with a 40 mph downstream gale. We caught some big ones on black rubberlegs nymphs and Two Bit Hookers.

The best option in my book is Hebgen Lake. The wind can kill this fishing but if you get a calm morning it’s about as much fun as an old man can have. Look for rising fish, tie on a size 16 Parachute Adams, and make your cast just ahead of a cruising fish. When he makes a hard right turn, pick up and try again. Eventually everything will line up. If you get real frustrated, drop a Skinny Nelson or a Cocktail Nymph about a foot under the fly. Henry’s Lake is not doing much for me yet but it should start happening near the mouths of some of the creeks soon.