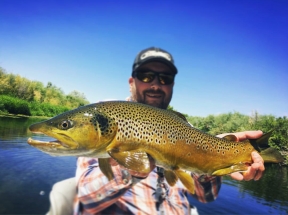 The Ranch has been about as good as I have seen it this year. There are more hoppers alone the banks than I have ever seen! I had the morning off a couple of days ago so I thought maybe a trip into the heart of the Ranch would be a good idea. The morning stared off with a great Trico spinner fall and lots of targets. I fished a #18 Double Wing Trico over a few of the larger fish I found. To be honest those trout put a beating on me! I looked a little closer on the water and noticed there were a few Callibaetis spinners on the water. I found some fresh targets and made a few cast at a fish that was selectively rising about every 15 to 20 seconds. He came up and ate my #16 Organza Callibaetis Spinner on the second cast. He made a two great head shaking jumps and then charged off into the salad where he dug in and my 5x tippet was not getting him out. c’est la vie! That’s how the game is played in the Ranch. The wind was blowing hard out of the South and as I walked back toward my truck feeling sorry for myself I noticed Hoppers by the handful were getting blown into the water in their efforts to escape me. It was almost as if fish were following me up the river. I watched as three or four good fish tried to eat every hopper that fell in the water. I sat down on the bank and watched these fish holding close to the bank.

Looking up river I noticed two gentlemen coming down the bank and they too were knocking hoppers in the water. My advantage was that they were deep in conversation and did not notice what was going on at their feet. Big trout were feeding on the hoppers they were knocking into the river! They passed by me and of course the big boys I was watching began eating every hopper that passed by. I was ready this time. I had 3x this time and a #8 Rainy’s Hopper. I had about 10 minutes of some of the best fishing in the Ranch I have ever had!

The Box has been fishing fair. Flows are at 611 cfs and I would bet it will continue to come down. The Box Canyon is still floatable with a hard boat until about 300 cfs. Anything under that plan on leaving some gel coat in the box. I would focus on small nymphs in the box. # 18 Green Zebra Midges, # 18 Silver Lighting Bugs will do the trick. Fish them deep and with split shot. If you’re getting hung up every cast then shorten your rig or adjust the amount of weight you’re using. I would also suggest having some #10 Black Rubber Legs. If the river continues to come down I think switching to streamers is a great Idea. A sudden drop in flows always slows the fishing down but it seems you can always feed them streamers. Wool Head Sculpins are always a safe bet in the Box Canyon.

The lower Henry’s Fork has been fishing very well. Hopper fishing has been very consistent and depending on the weather should continue to be great. On the cooler mornings you may have to wait a bit for the hopper bite to start as the hoppers will not become active until it warms up some. We should also begin to see BWOs soon and of course I expect Mahoganies anytime. The long term forecast calls for cooler temps and rain showers. Keep your streamer box handy!

Well its One Fly Weekend on the South Fork. A great event that raises lots of money that is put back into the resource. Good luck to all the guides and teams that attend this year’s event. Fishing on the South Fork has been holding up good this week. The early morning Mutant Stone hatch continues to be a great option. Palisades is down to about 10% of capacity and we hope to see demand drop over the coming weeks. I would have hoppers and small bead heads on the South Fork this week. Also look for Mahoganies and BWO to be coming soon.

The Teton will continue to improve as the irrigation demand drops. Again hoppers are the ticket. I think as it continues to cool down we can say goodbye to the Pmds and Caddis for another season. Hopper/Droppers will serve you well on the Teton. A #8 Moorish Hopper with a small #18 Cocktail Nymph or a #16 Two Bit Hooker. The cooler weather will eliminate the Weekend rubber hatch!

The Key to success on the Madison is get on early. The early morning fishing has been very productive. Try Lawson’s Hen Saddle Matucka first thing in the morning and you will see what I mean. The early morning bite usually has been coming to an end by 9:00 or 10:00 AM. The Mutant Stone is also still working in the early morning hours but I think the streamer bite is much more consistent. On the hot bright days the Madison has been tough. Hoppers have been getting some attention close in on the banks. I would also have BWOs on hand if you do happen to see some nose’s poking out of the water. A #16 No hackle will do the trick for you.

The Yellowstone River outside of the park has opened back up in certain areas. Check with local Montana Fish and Game for exact information. The canyon from the West Entrance to the Madison Junction is open and all the pull outs are open as well. The Brown Trout have just begun to move out of Hebgen so I would think the Madison in the Park should really start to pick up soon. Also look at the Gibbon to start fishing better. There will be days in the very near future that you can’t buy a rock to stand on in the Madison so the Gibbon is a great alternative and you will find some big browns that will hang a left into the Gibbon.

Look for Henry’s Lake to start heating up very soon. If the weather does what it says Its going to and stay cooler than I would bet that Henry’s Lake will fish very good in the coming weeks. The Hot Spot is always the State Boat Ramp but look at the County boat ramp and some of the creeks that run into Henry’s Lake. I would have leeches is various colors and also small nymphs. Stripping a #16 Bead Head Pheasant tail is always a good Idea on Henry’s Lake. Island Park Reservoir is at 16 percent of capacity so use caution if your launching a power boat.