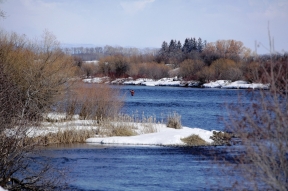 The box continues to fish well. I don’t have much in the way of new information as far as hatches go. I would come to the box armed with the usual. Black rubber legs #10 and #16 zebra midges in black, brown and olive. Access has not changed a whole bunch. I would have either snow shoes or some skis to get down to the water. I have noticed a few fish on the surface eating midges. I would have a Griffith gnat #18.

I scouted the warm river to Ashton stretch yesterday with Henry’s Fork Anglers guide Tom Provost. Again not much has changed as far as access. In my opinion I would leave the boat at home. While putting a drift boat in would not be an issue, getting it out would be a nightmare. The new Jump off Canyon access is still not an option and trying to get your boat out at the Ashton access is going to require 400 yards of rope and at least 6 dudes and possibly a D-9 Kat. However if you have to float than a personal pontoon would be the ticket. The fishing was great on this stretch yesterday. We found a few fish eating midges on the surface and the nymph fishing was great. Again #16 zebra midges and #10 black rubber legs worked very well. The big surprise for me was the blue wing olive hatch that began around 12:30 in the afternoon. While I did not see these small may flies in good numbers I did see them and the few I did see didn’t last long. Tom and I both hooked a few fish with a #18 nohackle. We also checked the Ora Bridge. The wind had other ideas so we didn’t fish but I did notice a few vehicles had made it down to the boat launch. I would use caution and make sure your four wheel drive is working before you attempt that task.

The South Fork is on the rise. 7000cfs as of today. There is a lot of water in the form of snow over there so I would guess that the South Fork will continue to rise. Currently they are matching inflow. If it stays steady I think the South Fork should fish very well. The Blue wings should start over there at any time. I would also bring the streamer box. All the access points on the South Fork are being used so you should not have any issues. It’s always a good idea to scout the access points out this time the year as things can change quickly.

If you’re looking for some nonstop dry fly fishing than look no further than the Madison. The walk wade section from Reynolds Bridge on up has really been fishing well. There are a few folks fishing the river but if you’re willing to walk a bit than getting away from people is no problem. I have found rising fish every trip over there this year. Again small zebra midges and Griffith gnats will work very well. Also don’t forget to renew your fishing license for the 2017 season.