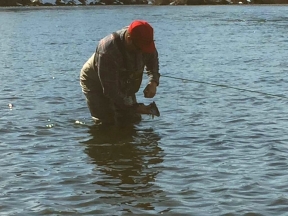 The box continues to fish well and while the pattern selection has not changed much from last week the access to the box at the dam has improved. You can walk down to the river without post holing the entire way. There is still too much snow for a boat launch. If you’re planning a day in the box come armed with the usual stuff. I would have rubber legs and small bead heads. A #10 black rubber legs followed by a #18 zebra midge in black, red or brown will do the trick. I also would have #18 lighting bugs and #16 Sawyers. Streamers will also work well in the box. Sculpin patterns in black, tan or olive. As far as the dry fly fishing goes I would have a #18 and #16 Griffith gnat. Also don’t be afraid to have a look at the Buffalo River. You will see Blue Wing Olives at some point in the day as the water temps are a bit warmer. A stop at McCrea Bridge is also a good idea.

Things on the lower river have really started to take off. Those of you wanting to get a float in will find all the access are open. You will need four wheel drive however. The top end of the warm river access you will need to slide your boat and the jump off canyon access will be a little tricky to get out. The Ora access is usable but again four wheel drive is needed. Chester on down you will not have any problems. The fishing has been good. I still have not seen blue wings in good numbers but it should be soon. If you’re wanting to get the early season dry fly fix then make sure you bring #16 and #18 Griffith gnats. I would also have #16 no hackles with you just in case the blue wings show up. It is spawning time so keep an eye out for the reds and avoid walking through them. As the water temps come up the blue wings will go but in the meantime a fishing a #16 Sawyers and a #18 black zebra midge will work well. As always have some black or brown rubber legs.

As of Wednesday the South Fork has come up to 13,000cfs. The word is that it will stay at that flow for a while. I would make sure to check flows before you hit the river. With the bump in flows I would suggest nymphs. Rubber legs and San Juan worms in pink and red. Midges and blue wings in the side channels and slower moving water will also work. All the access on the South Fork are good with the exception of the cottonwood access. This access is still closed.

The midge fishing on the Madison has been great! I have spent most of my time in the walk wade section and the fishing has been very consistent. Both nymphing and fishing small dries has been very good. Again not much different to report as far as patterns go. # 18 Griffith gnats and small bead heads. The river has come up a bit as they are making room in Hebgen for the runoff.