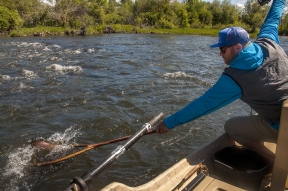 The Box has been fishing very well this week. We are still seeing salmon flies and the caddis hatches have also been consistent. Flows are 923 cfs and should stay that way throughout the weekend. Henry’s Fork Foam Stones with a #8 black rubber legs dropped behind will work well. I would also have some #16 Red Necks and olive #16 and #18 Zebra Midges. As you get near the take out look for large trout sipping spent caddis. A #16 Spent Partridge Caddis will work very well. I would also have some March Browns in your arsenal.

The Ranch will open up to fishing a week from today!

The lower river has been very good this week. The golden stones have begun to show and there have been a few gray drakes around. PMDs. have also started to hatch. I would guess that Green Drakes are right around the corner on the lower river. Henry’s Fork Foam Stone Golden #10 and #8 will get some attention! I would also have some PMD No-hackles #16 and some limestone cripples #16. If you find yourself on the river at dusk some #10 Split Flag Adams and #10 hackled spinners is a very good idea! As far as your nymph selection I would have #12 Pheasant Tails and of course some rubber legs. I would also keep an eye on the Fall River. It appears to have peaked and we should see things start to stabilize. I do think the fishing from Chester on down has been great and again will only get better. Keep in mind the lower river from Chester on down is big and if you’re planning a day of wade fishing it may be a bit more challenging!

The Teton is still big and it may be another 2 or 3 weeks for this river to come down to fish-able levels.

The Madison is also high in places but I still think fishing the Maddy is a good idea. I would guess that salmon flies on the Madison will appear towards the end of June first part of July. In the mean time I would fish the wade section. The water is up but visibility is not too bad and the fishing has been good. Small beads and rubberlegs. I would also have some streamers handy. I like bang tails and I would also fish some mini dungeons on the Madison.

The South Fork is running right around 22,000 cfs today and with inflow over 30,000 I would expect it will be awhile before this river comes into shape.

Most of the water in the park is big but fishable. I personally love the park and don’t think it’s possible to have a bad day of fishing in there! The Madison and Fire Hole have both been fishing well. I would have soft hackles orange and partridge and peacock #16. I would also have some #16 tan e-z caddis. Also I am hearing a few PMDs are starting to hatch.

Henry’s Lake has been fishing okay. There are not as many fish being caught but the ones that are being caught are larger than average. A few 10 pounders have been caught and lots of trout in the six to eight pound class. I would go with Hale Bop Leeches in olive and black. I would also have a few damsel nymphs.