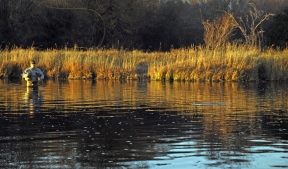 I can’t imagine a better place on the earth then the Railroad Ranch. Standing in the river while snow is falling and seeing large trout sipping blue wings is an amazing experience. The hatches have been epic to say the least. Blue wings and Mahoganies have been coming off daily. There is no point being on the river before 12:00. This coming week we should see the weather improve a bit. Come up and get your dry fly fix! The Ranch will continue to fish very well until it close’s. Winter flows this year will be better than they have in years. The goal is 400 cfs out of Island Park Reservoir. This is great news for the young of the year trout and as far next year goes. Let’s all hope for another great winter with lots of snow.

The box has remained consistent and should just improve as we head into October. I would suggest streamers. This is a great time of the year to fish streamers in the box. I would have some lil Kim’s and a few double dirty hippies. I always like sculpin patterns in the box and you can’t go wrong with Mike Lawson’s wool heads. Stick with the usual selection of small beads in the box and you will not be disappointed.

The Warm River to Ashton stretch has been heating up. Large browns and rainbows are on the hunt. I would use the same tactics that I suggested for the box canyon. Streamers and more streamers. The rain and snow has increased the flows from the Chester access on down through St Anthony. As of this morning the flows were 1800cfs. Look for this to go down as we head into next week. Have a good selection of blue wings and mahoganies in your fly box on the lower end as well. If you find yourself above the Ora Bridge or at the Ashton dam then I would also make sure you have a good selection of beads. A #16 or #18 zebra midge can be deadly this time of the year.

The South Fork has been hot this week. Our guide Elden Berrett had a great day streamer fishing on the upper section. As flows continue to drop look for great blue wing olive action. I have seen days on the South Fork when it seems like every fish in the river is up sipping these hardy may flies down. As always small beads are a must for the South Fork. I love the side channels on the South Fork this time of the year. If you can time it right and the blue wings are hatching look for pods of cutthroat trout to be in very shallow water sipping. Approach these are slowly. A cutthroat eat can be very subtle and you can easy not spot the rise until it’s too late and spook them all. I love a #18 no-hackle when they are eating in real shallow water.

The Teton has also been fishing very well. Look for the Teton to really get good this coming week as the weather warms up. I would make sure I had some #10 and #12 split flags if I was heading to the Teton. The drakes have been going off and on. This coming week it should really get going. Blue wings and mahoganies is also a good idea. I like a #18 no-hackle for the blue wings and a #16 hackle stacker and a #16 last chance cripple for mahoganies. A #16 and #18 two bit hooker and some zebra midges will also work well. I also like cocktail nymphs in the same size.

The hatches on the Madison have been great! Blue wings have been very consistent. You will find great hatches. I would have #16 and #18 hackle stackers. This is also a great time of the year to be between the lakes. Every year somebody catches a brown trout of a life time in this section. Large browns make their way out of Quake Lake this time of the year and are all about eating streamers. I like fishing double dirty hippies and big sculpins in that section of the river. I would also have some beads handy this time of the year and rubber legs.

It really is a great time of the year to be in the park. The choices are limitless! The barnes holes, The Fire Hole and the Gibbion are all fishing very well. I would have the same blue wing patterns that I have mentioned and I would add some white millers. The Barnes holes have been good and will just get better as we head into October. If the barnes holes are full then head up river. Cloudy overcast days will produce great blue wings on the Madison in the park and sunny warmer days watch for the white millers. Don’t forget about the Yellowstone river, this is a great time of the year to feed a large cuttie a steamer in the park. Keep an eye on the weather if you plan on being in the park. There have been many road closures this week as snow has been heavy in the park. The road to slough creek has been closed multiple times this week due to snow but as next week warms up I would try to get there. Slough creek can be amazing this time of the year.

Henry’s Lake will be the place to be from here on out. We have had some great days and very happy guest on the lake this week. I would have scuds and bead heads on the lake. Don’t forget some leech patterns. Try slow stripping a scud or a #16 cocktail nymph on the lake. Hebgen has also been fishing well . I would have some copper zonkers if I was heading that direction.