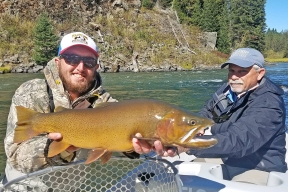 As most of you are aware, nasty weather moved in to our area. We saw it all. Snow rain and wind. This is great news! Bad weather equals great fishing! Some of you may recall the blog we did on blue wing olives this spring. The bottom line is that blue wings love nasty weather and this year is no exception. The first couple of day of nasty weather the ranch fishing was nothing short of amazing! Both blue wings and mahoganies hatched in great numbers and it appeared as though every fish in the ranch was up eating! If you’re in the ranch this coming week I would have #18 and #20 No-hackles. Do not count out hoppers this time of the year. I would have some #8 and #10 Rainey’s hoppers. The darker the better. It seems the hoppers this time of the year are darker than what you see earlier in the year. It really is a great time of the year to be on the ranch. The leaves are beginning to change and the elk in the park have love on the brain. If you’re lucky you may hear a bugle or even see a herd bull come out in plain sight. Last week I watched a young bull moose try his best to impress a cow. She was not having it! Her ears went back and she gave him a kick that would have killed any of us and with his head hung low off he went. Maybe next year.

The box has not changed much at all from last week’s report. I think the fishing has picked up some but the patterns have not really changed. I would have the usual for the box #16 and #18 brown zebra midges. I also like black and red in the same size. I don’t think there is any reason other than maybe a streamer run, to be on the water until close to 10. The mornings in Island Park can be chilly this time of the year so there is no need to be out first thing.

The lower has really picked up this week. Pre spawn browns are starting to get on the aggressive side and a few folks have hit pay dirt fishing streamers. I would also have some blue wings and mahoganies on the lower river. The weather forecast for the coming weekend calls for rain and snow but don’t let that slow you down. Bundle up and get on the water, if you’re lucky that nasty weather will come in and you may just have some of the best fishing you have had all season. I would have #16 and #18 cocktail nymphs and #18 black zebra midges. I would include #18 no-hackles and some #18 hackle stackers. A good selection of streamers is also a good idea.

The Teton has really started to come on this week. We have had multiple guest fishing with us this week that have caught some amazing fish! I would again have blue wings and mahoganies. Having some drakes is also a great idea. I suggest a #10 or #12 split flag. I would also take a few #10 and #12 purple chubbies. I don’t know what it is about chubbies and cutties but make sure you have a few. The usual beads for the Teton #16 and #18 two bits and # 18 cocktail nymphs. Zebra midges are also a great idea.

The South Fork just continues to improve. I would again make sure to have a good supply of blue wing olives and mahoganies. Like I mentioned last week spend some time looking in the shallow side channels. I would also pay attention in the riffles as the dry fly fishing has really been good this week and will just get better. This is also a great time for streamers as well and the scenery on the south fork is second this time of the year. Keep an eye on the weather and if you see some storms heading in our direction then quit what you’re doing load up the car and get out here.

The park has been great. I have spent many days on the Madison in the park this week and it’s been well worth it. Swinging buggers and soft hackles has been great in the park. I would also suggest you have a good supply blue wing olives with you. The dry fly fishing on the Madison in the park this time of the year can be really good, large trout coming up from Hebgen are all about eating little blue wings. They are easy to spot among the smaller resident trout and can be very challenging to say the least. I am a huge fan of the No- Hackle just about anywhere fish and the Madison in the park is no exception. I have yet to find a large lake runner who won’t eat it if presented properly. The Yellowstone River in the park is also a spot to take a look at if you don’t feel like dealing with the crowds on the Madison. I would have streamers. An olive and gold lil Kim’s has been working very well. Slough creek continues to fish very well as do the Lamar. As always keep an eye on the weather as the Lamar will blow out quickly if the rain comes.

Henrys Lake continues to be the spot. While it did slow a bit this week when the weather cleared up, this coming week should be amazing on the lake. I would fish the cliffs and I would also check the state boat ramp. I really do think you can fish just about anything if they are anywhere near the state boat ramp. I would have scuds and bead heads. I would also have a good selection of leech patterns.