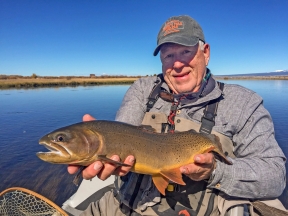 The Ranch is as good as it gets. Fish are in pods eating blue wing olives. There have been carpets of blue wing on the right days. Fishing in the Ranch can be frustrating to say the least. Big fish in pods eating blue wings all over and you can’t feed a fish to save your life! We have all been there for sure. I will tell you what sometimes works for me in this situation. If the bugs aren’t thick and fish are rising don’t flock shoot. Pick a single target and try to figure out his rise rhythm. Let’s say he is rising every 5 seconds, try to time your fly to be in his area when he come up. If you’re in the situation of a blanket hatch and can’t get them to eat then try to make your fly stand out. I have tried using a larger fly or a completely different pattern. If there are a 1000 bugs on the water and your matching the hatch don’t be surprised if you can’t feed a fish. A #16 renegade has been a favorite choice of mine in that situation. Lastly don’t take it to heart if you take an ass kicking in the Ranch. We have all been there done that and we will continue. I can’t think of a better place in the world to take a beating then in the Ranch. I would go armed with #16 and #18 no-hackles. I would have the usual attractors and don’t forget hoppers. I would also have some Griffith gnats.

The Box has not changed much scene my last post. I would have the usual selection of small beads. Red, brown and olive #16 and #18 zebra midges. I would have #16 two bit hookers and #18 cocktail nymphs. Don’t forget to have some #10 black rubber legs. The flows in the box are still very much floatable. I also really like steamers in the box this time of the year.

The lower river has been very consistent. Warm River to Ashton has been producing some very large brown trout this last week. Streamers and nymphs have been working well. I would stick with the same nymphs that I have mentioned above. Streamers have also been fishing very well. I would have crystal zonkers and copper zonkers. Lil Kim’s in both silver and gold. Cheech leeches have also been very good. Look for fish rising in the afternoon. Blue wings have been hatching between 11:00 am and 1:00 pm. If you find fish up eating you can’t go wrong with a #18 no-hackle. I would have #18 cocktail nymphs and #18 black or brown zebra midges.

The South Fork has also started picking up. Great hatches of blue wings and the streamer fishing has been great. I would fish #16 and #18 hackle stackers in the riffles and make sure to include some sparkle flags in the same size. The Moorish May Day is also a great pattern for the South Fork. As far as streamers go I would have some mini black dungeons and Cheech leeches in some different colors.

The Drakes on the Teton continue to be very consistent. I would fish a #10 and #12 split flag Adams. I would also have some #12 pheasant tails. Look for blue wing olives as well. I think the Teton is fishing better now than it has all year. If you have never fished this gem than now is the time. There are some very large fish on this river and they are very catch able. With the hatches being as consistent as they are and the amount of fish that are up and rising, I think a day or two on the Teton is well worth it.

The name of the game on the Madison is nymphs. Nymphing small bead heads on the Madison has been very consistent. You can’t go wrong with any of the patterns I have mentioned above. I would also add red # 18 iron may thorax and #18 tungsten bruised blue wing olives. Some # 16 olive anato may’s is also a good call. Take some zonkers with you to!

I have been spending quite a bit of time in the park as of late and I can tell you it has been good! The people hatch on the lower Madison in the Park is border line crazy. Most folks have been fishing the Barnes Pools. It’s fun to drive into the parking lots and see all the different license plates. This is not my style of fly fishing. I avoid the situation one of two ways. I drive to a different spot or do a little walking. The bigger fish at the Barnes holes are not resident fish they are moving through. You can find these fish from the lower river in the park all the way up to the confluence. They are coming out of Hebgen Lake and they like to eat dry flies. My point is that you can find great fishing in the park and avoid the people hatch. I spent last weekend in the park with Scott Kennedy and Shawn McKay. The wind was horrible but we found some fish in the Madison and we decided to go fish the Yellowstone. The fishing was good to say the least and we didn’t see anybody else.

Henrys Lake continues to be the spot. The only thing that may keep you from enjoying a great day on Henrys Lake is the weather. Wind has been a bit of an issue this last week. If you can get on the water early before the wind comes up fishing on Henrys Lake can be good. Sounds like there has been some issues with folks fishing off the boat ramp. It’s simple, there are signs that say “NO FISHING” on the boat ramp. As far as fishing goes I would have some scuds and small beads. I would not be afraid to streamer fish either. Of course leech patterns are also very effective.