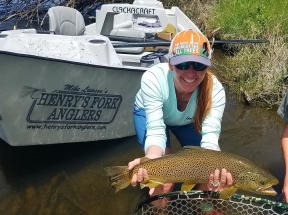 The flows in the box have come down to 755 cfs and the fishing in the canyon has been ok. You will find a few fish feeding on mother’s day caddis and I would not be afraid to fish streamers in the box. As always make sure you have some rubber legs. The big stones are not hatching in the box yet but the nymphs are headed to the banks. A #10 black rubber legs and a #16 electric caddis nymph is a great combo in the box this time of the year.

The Salmon flies have been spotted from the cardiac slide all the way down to the Chester back water. I would guess the main hatch is going to be between Ora and Vernon. I would also guess that you are going to find a lot of fish starting to look up on the lower half of the Warm River to Ashton float. With the salmon flies come the people. It’s an exciting time to be on the river after such a long winter. Be patient and courteous to your fellow anglers. I would have #4 and #6 Henry’s Fork foam stones, cast the big dries into the danger zone. Cast under trees and as tight to the bank as you can. If you lose all your flies, fear not! We have a ton in stock and can sell you more. I would also have black and brown rubber legs in #4 #6 and #8. I like the coffee and black rubber legs as well.

The Teton is still a little high and out of sorts, but as things start to come down and clear up, we will get some reports going.

The Upper Madison has seen a drop in flows over the last week, as North Western energy looks to fill Hebgen Lake in order that have enough water for the big flush taking place around June 1st. In case you haven’t heard, they will be flushing the river around the first of the month and you can expect approximately 3,200 cfs pouring out of Hebgen for at least three days.

The South Fork of the Snake will see a bump in flows starting today. It will go from 16000 to 18000cfs throughout the day. I would guess that will slow the fishing down some for a few days anyway. If it stays at that that flow I would not be afraid to fish rubber legs and hot heads in the riffles and along the banks.