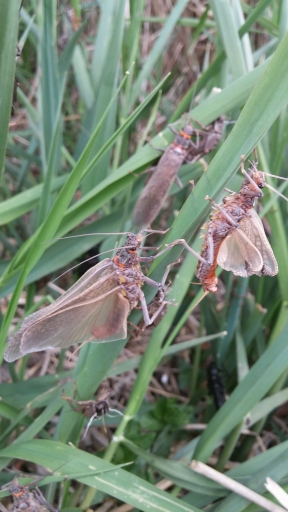 We are getting lots of calls regarding the whereabouts of the salmon flies. A few adult bugs have been spotted in the coffee pot area and a few have been spotted on the lower river. So, the answer to the question is we don’t know. I have been on the lower river rolling rocks and have found a good number of nymphs so I would think if we can get a few days of nice weather, we should see them but that is just a guess. I have to admit I was way off on my guess of when they would hatch this year. I guessed after seeing snow conditions that we would see them the second week of May, boy was I wrong!! April and May came with a vengeance! Rain and snow and hurricane winds slowed everything down. Water temps are close but still a little cold. Its early in the season but there are some alternatives if you want to avoid the crowds.

Flows have come up in the box to near 400 cfs. That is floatable with the drift boat but plan on leaving some gel-coat on some rocks. Flows will come up but as to when that will happen would just be a guess on my part. Fishing rubber legs in the box is always a good choice this time of the year. I would have the usual in the Box. Black or brown rubber legs, bullet quills and zebra midges. Streamers are also a great call. There have been some blue wings and a few caddis. The water out in front of the shop has been fishing well and should get better as the weather starts to warm up.

A few salmon flies here and there. Plenty of nymphs up close to the bank and if we can get some warm weather then we should see some adults. As far as to what day it’s just a guess. I can tell you for sure that they will come! The river is a little low so the banks might not be as productive as they can be when the water is higher. Try fishing the deeper runs with a Henry’s fork foam stone with a black rubber or brown rubber legs. Remember it’s salmon fly time so there are going to be some folks around. There is a large group of people that enjoy fishing the river in a drift boat. It’s also a major holiday weekend so plan on seeing a few folks around. Be patient and be good to one another.

The Teton is a great alternative this year. Flows are around 800cfs and the water is pretty clear for the most part. I would take some rubber legs, bullet quills and Duracell’s. The early season streamer fishing can be really productive. The water is a little dirty from old dam down to hog hollow but the nymph fishing is good!

The South Fork is also in great shape and the fishing has been solid. Plan on seeing blue wing olives and plenty of midges. Focus on the drops with zebra midges and cocktail nymphs. I would also fish rubber legs off the drops.